Review: Thomas Merton’s deep devotion to the Eucharist — and how it called him to radical love 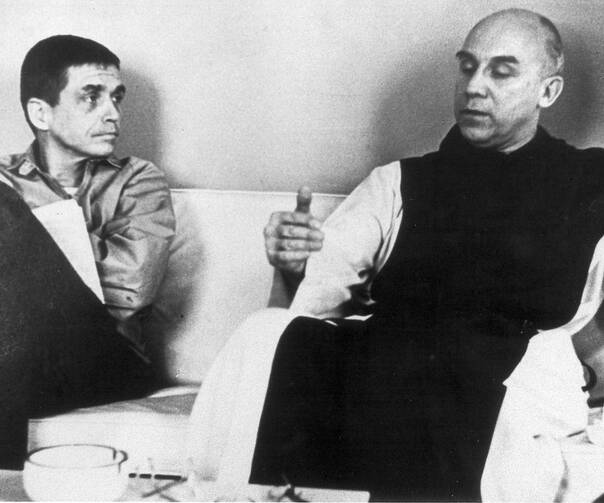 Nearly 54 years after his untimely death, Thomas Merton continues to inspire and baffle. I do not mean that as a criticism; those responses to Merton simply reflect his complexity as a Trappist monk, priest and spiritual seeker. He constantly questioned himself, dared to admit his failings and wanted nothing less than to seek God and discover his authentic self.

In Man of Dialogue: Thomas Merton’s Catholic Vision, Gregory K. Hillis, a theology professor at Bellarmine University in Louisville, Ky., tackles an argument that has long haunted Merton’s legacy: that Merton somehow was not a faithful-enough Catholic. Hillis deftly shows this to be a misguided belief, one that even prompted the U.S. bishops in 2006 to exclude Merton from the United States Catholic Catechism for Adults, despite his being one of the best-known and most significant American Catholic thinkers of the 20th century.

Pope Francis called Thomas Merton “a man of prayer, a thinker who challenged the certitudes of his times and opened new horizons for souls and for the Church.”

Hillis picks up where Pope Francis left off in his 2015 address to the U.S. Congress, in which he singled out Merton and three others—Dorothy Day, Abraham Lincoln and Martin Luther King Jr.—as exemplary Americans. The pope called Merton “a man of prayer, a thinker who challenged the certitudes of his times and opened new horizons for souls and for the Church,” as well as “a man of dialogue, a promoter of peace between peoples and religions.”

Hillis puts flesh on the bones of that assessment. He draws from his extensive reading of Merton’s famous and lesser-known writings; recordings of lectures Merton gave when he was novice director at the Abbey of Gethsemani, outside of Louisville, Ky.; and interviews with those who knew him to show how Merton’s Catholic identity remained a constant thread within his personal spirituality. It comes through in Merton’s love for the liturgy, reverence for the Eucharist and devotion to the Blessed Mother; also in his belief in the purpose of the priesthood and the value of monastic life and his constant yearning to deepen his prayer life and attain a closer union with God.

Some of the most fascinating sections of Man of Dialogue revolve around Merton’s devotion to the Eucharist, a frequent theme in his writings. He often spoke of the Mass in mystical terms, describing one experience “at sunrise when the light of the sun falls on the altar and powerfully lights up the mystery of the divine presence.” To a Muslim friend, Merton wrote that the Mass is “the moment of the nearest presence of God in our lives.” Often when confronted with inner turmoil (for instance, when he was considering whether to convert to Catholicism, discerning his vocation to the priesthood or, later, deciding whether to remain at Gethsemani or transfer to another monastery), he often sought answers before the Blessed Sacrament.

Some of the final entries in the journal of his trip to Asia refer to Masses he celebrated. In the very last entry, dated Dec. 8, 1968, he writes of his plans for celebrating Mass on the feast of the Immaculate Conception. Merton died two days later of what was determined to be an accidental electrocution, caused when he apparently touched a faulty fan wire as he was coming out of the shower in the cottage where he was staying outside of Bangkok.

Merton spoke out at a time when many Catholics supported the use of nuclear weapons even if deployed in a first strike against the Soviet Union.

Hillis connects Merton’s reverence for the Eucharist, his vast knowledge of doctrine and his deep reading of the Gospels with his subsequent, often controversial writings on peace, nonviolence and racism in America. Hillis points out that Merton’s writings on the issues of his day were not driven by the secular peace movement of his time or any countercultural 1960s activism. Rather, they were “rooted principally in theological concerns.”

On peace and nonviolence, Merton never identified as a pacifist. Unlike other prominent peace advocates such as his friends Dorothy Day and Eileen Egan (the co-founder of Pax Christi USA), Merton continued to accept Catholic teaching on just war. However, the atomic bombing of Japan during the Second World War and the subsequent nuclear arms race convinced him that no war could be justified in the age of nuclear weapons, given the certainty of widespread civilian deaths and unspeakable destruction.

As Hillis notes, Merton began to speak out publicly on this issue with “The Root of War Is Fear,” an essay that first appeared in The Catholic Worker newspaper: “The duty of the Christian...is to strive with all his power and intelligence, with his faith, hope in Christ and love of God and man, to do the one task which God has imposed upon us in the world today,” Merton wrote. “That task is to work for the total abolition of war.”

Merton spoke out at a time when many Catholics—including bishops, as Hillis points out—supported the use of nuclear weapons even if deployed in a first strike against the Soviet Union. Merton wrote instead of “the law of love, which is the law of Christ” as the justification for his views on nonviolence.

Still today, Thomas Merton calls us to immerse ourselves in the meaning of the Eucharist and in Christ’s radical call of love.

Merton’s writings on war and nonviolence received a boost when Pope John XXIII issued “Pacem in Terris,” which underscored many of Merton’s points. Today, Pope Francis often echoes Merton, saying in 2017 that nonviolence must become “the hallmark of our decisions, our relationships and our actions.” One can only yearn for what Merton would have to say today at a time when the conflict between Ukraine and Russia has pushed the world once again toward the edge of a nuclear confrontation.

Merton’s writings on race are likewise rooted in Christian theology and church teaching. Hillis spends considerable time on an essay known as “Letters to a White Liberal,” words that are as resonant today as when they were written in the summer of 1963. Merton plants his theological arguments against racism firmly within the context of the Incarnation. Christians are called to regard others as Christ. Merton pointedly asks, “How then, do we treat this other Christ, this person, who happens to be black?”

In one of the most moving sections of the book, Hillis delves into a string of correspondence between Merton and Father August Thompson, an African American priest of the Diocese of Alexandria, La., who would become one of American Catholicism’s most significant voices. Writing to Merton, Thompson described how in many communities African Americans could only enter a white parish if there was no black parish within a reasonable distance. Once there, he added, they had to sit together in the same section and wait until white parishioners had received Communion before being allowed to approach the altar rail.

For Merton, this meant that the Eucharist—“the sacrament of love that binds us together” and manifests Christ’s love for all humankind—had been weaponized as an instrument of disunity and hate, “the ultimate blasphemy.” What is so heartbreaking about many passages in Hillis’s book is that we confront many of the same issues of discrimination, polarization and disunity today. Where and who are the prophetic voices today like Merton (and Father Thompson), who can return us to “the whole spirit and orientation” of our faith?

Hillis ends his book with a touching anecdote, listing the relics of various saints that Merton carried with him on that final, fateful voyage to Asia.

Still today, Thomas Merton calls us to immerse ourselves in the meaning of the Eucharist and in Christ’s radical call of love. With the world beset by so many simultaneous crises, Merton’s example of genuine encounter with God and with others, as Hillis ably points out, offers us a way forward.

This article also appeared in print, under the headline “Finding Christ in the Other,” in the June 2022, issue.

Judith Valente is the author of five books on spirituality, including How to Be: A Monk & a Journalist Reflect on Living & Dying and Purpose & Prayer, Forgiveness & Friendship, with Paul Quenon, O.C.S.O. She is vice president of the International Thomas Merton Society.

@JudithValente
Show Comments ()
Join the conversation: Login or create an account
Before you can comment, you need to update your profile to include your first and last name, as required in our comments policy. Then reload this page and you'll be set up for commenting. Update your profile