Review: Lawrence Ferlinghetti and the vocation of the poet 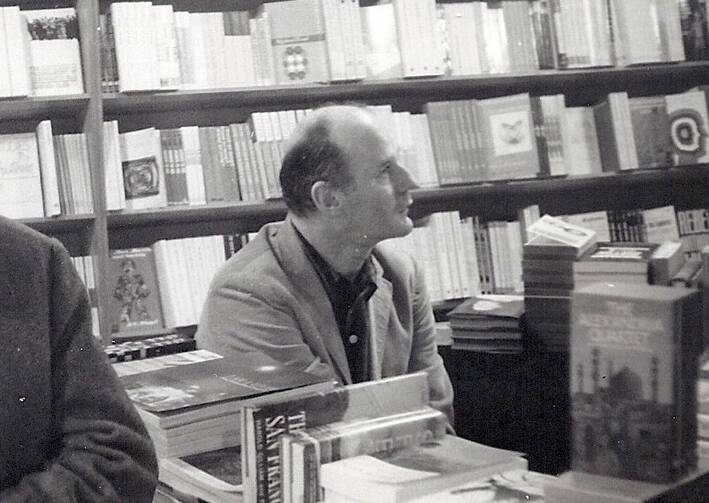 Neeli Cherkovski, the prolific poet (most lately of ABCs and Hang On to the Yangtze River) and biographer of Charles Bukowski, first wrote a biography of Lawrence Ferlinghetti in 1979. This recently released expanded edition of Ferlinghetti, A Life includes a new foreword, epilogue and afterword, each of them alight with moving, intimate stories.

In the foreword, “From the City of Angels to the City of Poets,” Cherkovski tells of how he came to write the biography. Fired from the San Francisco mayoral campaign of George Moscone and living off unemployment checks, he got to know Ferlinghetti and other local poets starting in 1974. He learned Ferlinghetti had a shy, sensitive side but was also “committed to clarity, not just in prose but in poetry as well.”

Ferlinghetti ended up having a mostly solitary childhood filled with large, clean rooms with large windows and many books.

One day, hanging out in Caffe Trieste, Cherkovski met Jerry Rubin, one of the infamous Chicago Seven, a group of political activists arrested for their antiwar activities at the 1968 Democratic National Convention in Chicago, Ill. Cherkovski mentioned his idea for a biography of Ferlinghetti. Rubin called his agent on a pay phone. The agent loved the idea, and this book was born, but only after Cherkovski took a tab of acid to help him write the proposal and “cajoled” the secretive Ferlinghetti into telling him more details about his life and thought.

Ferlinghetti was born in Yonkers, N.Y., in 1919 to an Italian/French family. His father died when Ferlinghetti was an infant; his mother was mentally unstable thereafter. An aunt and uncle took the infant Ferlinghetti in. Soon after, his aunt Emily left her husband and took Ferlinghetti to France; thus, like Thomas Merton, his first language was French. Though Emily returned to her husband, things did not work out; she went to work for a rich Bronxville family, taking the boy with her (after first depositing him in an orphanage for a few months). At some point she left—no one told him why—and the family adopted him.

Ferlinghetti ended up having a mostly solitary childhood filled with large, clean rooms with large windows and many books. The solitude, the books and the views of oak trees in the changing light profoundly shaped his character. Cherkovski writes:

Lawrence had been uprooted as a child, and the abiding symbol of his early years continued to be the fantasy carnival—the Coney Island of his imagination—far off in the distance, unreachable but always calling. To this day he has trouble recalling the realities of his childhood.

Much of it is still buried. When he writes about his youth he uses death imagery instead of the mundane symbols of his everyday life.

But he had friends in boarding school; one of them, Alden Monroe, a.k.a. “Rube,” from Peabody, Mass., always carried around two books: The Sun Also Rises and Look Homeward, Angel. The latter, with its subtitle, “A Study of the Buried Life,” reverberated within Ferlinghetti for the rest of his life.

After an eventful stint in the Navy during the Second World War, Ferlinghetti returned to New York City; and, inspired by Ezra Pound and T. S. Eliot (for years he carried around a copy of Eliot’s Four Quartets), as well as Marianne Moore, E. E. Cummings and Kenneth Patchen, he began writing his own poetry.

One of the Catholic thinkers Ferlinghetti read was Thomas Merton, particularly The Seven-Storey Mountain.

In 1948 he journeyed to Paris to study at the Sorbonne. Cherkovski writes:

As he worked on the thesis [“The City as a Symbol in Modern Poetry: In Search of a Metropolitan Tradition”], Ferlinghetti began to study Catholicism, an interest that developed as he toured the many cathedrals and churches of Paris. He read Thomas Aquinas and other Catholic thinkers and got to know a priest with whom he would argue almost weekly for a long period of time about Catholic doctrine. Much of his mature poetry reflects the arguments that raced through his mind back then.

As noted in America after Ferlinghetti’s passing in February 2021, one of the Catholic thinkers Ferlinghetti read was Thomas Merton, particularly The Seven-Storey Mountain. One of Ferlinghetti’s objections to Catholicism, to judge from his poetry and his last novel, Little Boy, was the church’s ban on artificial contraception; he was concerned about overpopulation from early on. He may also have objected to Catholicism’s focus on sin; he loved Walt Whitman’s passage about wanting to “live with animals” who “do not sweat and whine about their condition,/ They do not lie awake in the dark and weep for their sins,/ They do not make me sick discussing their duty to God.” Of course, animals do not write poems, either.

Ferlinghetti later settled in San Francisco because it seemed to be the most European of American cities. He wrote reviews and short pieces on the local literary scene for newspapers and taught for one year at the University of San Francisco, where he sparred briefly with what he perceived as rigid Catholic dogmatism. In June of 1953, he opened City Lights Bookstore with Peter Martin, and a significant movement of literary history began. What put the store and publishing house on the map nationally was Allen Ginsberg’s trial for obscenity for his poem “Howl,” which Ferlinghetti published while hailing Ginsberg as the new Walt Whitman. As usual, the banning of a book led to its mass popularity.

For the rest of his life, with much help, Ferlinghetti ran the bookstore and its small publishing house, wrote, painted and got away occasionally to a cabin in Bixby Canyon with his wife and two children. He also traveled the world and was politically active in leftist causes. He was never a “useful idiot,” though. The oppressive melancholy in the Soviet Union struck him forcibly; and though the Nicaraguan revolution impressed him, he was wary because of Fidel Castro’s involvement.

What struck me as I read about Ferlinghetti was that he was able to be a decent man—“His gentle nature is missed,” Cherkovski writes in his afterword—while staying true to his vocations as a poet, painter and bookseller. In one sense—perhaps, ironically, because of his connection to the Beat poets—he was a Renaissance man. He had been a warrior, a family man, a businessman and poet-painter. Yet he was shy, reluctant to take center stage (also occasionally argumentative, cheap and boastful about his painting, the author notes). Cherkovski says, “You could honor him as a poet or as a publisher or as a bookseller or as an advocate for human rights and civil liberties—or simply for his whole being.”

This biography is not an academic one. Rather it is a biography by “a poet who set out to celebrate another poet.” “In that,” Cherkovski writes, “I hope I succeeded.” That he has.

This article also appeared in print, under the headline “A Poet of Gentle Nature,” in the May 2022, issue.