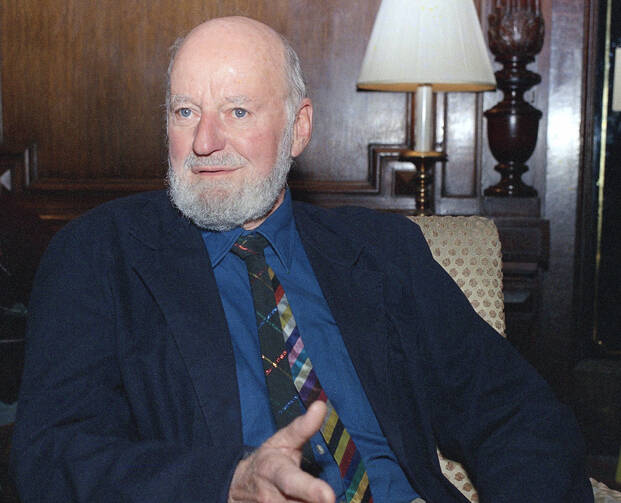 “The world is a beautiful place/ to be born into/ if you don’t mind happiness/ not always being/ so very much fun/ if you don’t mind a touch of hell/ now and then/ just when everything is fine/ because even in heaven/ they don’t sing/ all the time.”

So wrote Lawrence Ferlinghetti in “The world is a beautiful place,” from his 1958 poetry collection A Coney Island of the Mind, one of many well-known poems to come from the pen of this towering figure in American letters over his long lifetime.

Ferlinghetti, who died Monday of lung disease at the age of 101 in his adopted hometown of San Francisco, was one of the nation’s most iconic poets and political activists of the last 70 years. Though Ferlinghetti actually identified himself more as a supporter of other famous poetic voices than as a poet himself, he had a profound influence on American culture as well as on the conventions of poetry in and out of academia. His intellectual world included Thomas Merton, the famed Trappist monk and spiritual writer, who both influenced and was influenced by Ferlinghetti. He also served as an inspiration for many musicians, including Bob Dylan, who wrote Ferlinghetti a long (and almost unintelligible) prose-poem letter in 1964.

"I suppose that with a name like Ferlinghetti they said, ‘Oh, he’s a good old fish eater,’ and let it go at that.”

Often grouped with “the Beats” along with Neal Cassady, Gregory Corso, Allen Ginsberg and Jack Kerouac, Ferlinghetti served rather as something of a patron to that generation of writers and poets. “I wasn’t really one of the Beats, but I got associated with them because I published them,” he wrote in 2012. He referred to himself as “the last of the bohemians rather than the first of the Beats.”

Born in Yonkers, N.Y. in 1919, Ferlinghetti was raised by an aunt in France and later by foster parents (his father died before he was born, and his mother was committed to a mental institution soon after his birth). A Navy veteran of the Second World War, he earned an undergraduate degree from the University of North Carolina and a master’s degree from Columbia University in New York, and then a doctorate in comparative literature from the Sorbonne in Paris in 1951. (Like Kerouac, Ferlinghetti’s first language was French.) Soon after, he moved to San Francisco, where he taught part-time at the University of San Francisco, began work on a novel and wrote poetry.

His tenure at the University of San Francisco would be short. “A Catholic college. Jesuit. I didn’t last very long there,” Ferlinghetti told Al Aronowitz in 1997. “For one thing, they never asked me any questions about what religion I was when they hired me, and I suppose that with a name like Ferlinghetti they said, ‘Oh, he’s a good old fish eater,’ and let it go at that.”

Ferlinghetti was a baptized Catholic but described himself in Joycean terms that acknowledged his Catholic heritage while rejecting church teaching.

Ferlinghetti didn’t think much of the university’s pedagogical approach at the time. “This university was so far out of it that you might as well be back in the 16th century, if not earlier,” he said. “I soon ran into trouble with a priest who didn’t want any mention of James Joyce on the ‘Hamlet’ bibliography—I was teaching an upper-division course in Shakespeare. He didn’t want the chapter of Joyce’s Ulysses mentioned in the bibliography even though it’s the most brilliant modern criticism written on ‘Hamlet.’ Then, on Shakespeare’s sonnets, he didn’t want the homosexual interpretation even mentioned. I left at the end of the year. It was mutual.”

Ferlinghetti was a baptized Catholic but described himself in Joycean terms that acknowledged his Catholic heritage while rejecting church teaching. “It’s true I had a Catholic background, but I could hardly be called a Catholic,” he told Aronowitz. However, he refused to consider himself a non-Catholic either:

In this country, if you’re not Catholic, you’re a Protestant. In Europe, it’s not this way. The French writer or poet, he may write all kinds of blasphemous, outrageous attacks on the Church, the Catholic Church. He may be as far away from the Church as you can imagine—condemning it on every ground and throwing everything out the window, having nothing to do with the doctrine and blaspheming it all over the place, and yet he will not consider himself a Protestant. He will consider himself a non-conforming Catholic...I would say I’m in the French tradition.

In 1953, Ferlinghetti became co-owner of City Lights Booksellers and Publishers, a cultural institution that remains a fixture of San Francisco intellectual life almost seven decades after it opened. Just three years later, he was arrested because of his publication of Allen Ginsberg’s now-famous poem “Howl.”

"I read The Seven Storey Mountain in the late 1940s. [Merton] was probably the first modern Catholic writer that I had ever read."

Ginsberg’s opening line, “I saw the best minds of my generation destroyed by madness,” is now part of the American lexicon, but the verses that followed caused an angry reaction from establishment figures at the time, including the district attorney for San Francisco. He brought Ferlinghetti to trial on charges of printing “indecent writings” and promoting lewd material. In a losing effort, the attorney general called only two witnesses (one an English professor from, yes, the University of San Francisco) to testify that “Howl” had no literary merit.

The media frenzy over the “Howl” trial—and its landmark decision in favor of First Amendment rights—made Ginsberg and Ferlinghetti household names. In the ensuing years, Ferlinghetti not only became a widely recognized poet but also tried his hand at theater, fiction and painting, all while running City Lights as both a bookstore and a publishing house. His books eventually sold over a million copies worldwide.

In 1998, Ferlinghetti was named the inaugural poet laureate of San Francisco, and in 2003 was elected to the American Academy of Arts and Letters. (He was also the inspiration for a Muppet poet, Ferlinghetti Donizetti.)

One literary relationship unmentioned in many obituaries of Ferlinghetti was his connection with Thomas Merton. “I read [The] Seven Storey Mountain in the late 1940s,” Ferlinghetti told Paul Wilkes in a 1984 interview. (Jack Kerouac and Gregory Corso also noted the influence of Merton’s famous spiritual memoir on their own writing, with Kerouac describing himself in 1960 as “actually not ‘beat’ but strange solitary crazy Catholic mystic.”) “He was probably the first modern Catholic writer that I had ever read. And inasmuch as I had gone to Columbia University also in 1946-47, I identified with him quite strongly,” he continued. “And then it was only in 1961 that at City Lights Books we published a Journal for the Protection of All Beings. This was issue number one. And the first thing in here is Merton’s ‘Chant to Be Used in Processions Around a Site with Furnaces.’”

Ferlinghetti’s Journal for the Protection of All Beings, a “radical ecology” journal, also featured in that first issue an interview with Allen Ginsberg by Gregory Corso, an interview with Ginsberg and Corso by William S. Burroughs, and Gary Snyder’s essay “Buddhist Anarchism.” Merton’s appearance alongside other characters of some notoriety earned him a rebuke from his abbot at the time. A few years later, when Merton started his own tiny literary journal, Monk’s Pond (with a press run of 200), he featured both Ferlinghetti and Kerouac; the latter’s contribution was “A Poem Dedicated to Thomas Merton.”

Ferlinghetti read The Seven Storey Mountain in part because he was “very involved in exploring Catholicism at that time. I remember when I was in France, just before that I had been down to Solesmes, which is a monastery in the south of France. And I was particularly interested in the Trappist discipline. But what made [T]he Seven Storey Mountain interesting to me was that here was this Columbia intellectual that was converted. Especially at a time when most poets were going the other way and becoming unconverted,” Ferlinghetti continued.

Merton and Ferlinghetti finally met in San Francisco on May 16, 1968. “The only time I met Merton in person was when he came to San Francisco on the way to the Far East…. I knew he was coming, we picked him up at the airport and then he stayed at the City Lights editorial apartment at 485 Filbert Street, in San Francisco,” Ferlinghetti remembered. “Saw Ferlinghetti in S.F. and drank some espresso with visionaries,” Merton wrote to a friend. Less than seven month later, Merton died from accidental electrocution in Bangkok, Thailand.

Even into his later years, Ferlinghetti never lost the prophetic fire that marked his life’s work, and he shared Merton’s conviction that human civilization was at a crossroads between enlightenment and apocalypse. “If you would be a poet, create works capable of answering the challenge of apocalyptic times, even if this meaning sounds apocalyptic,” Ferlinghetti wrote to young poets in the preface to his 2007 book Poetry as Insurgent Art. “You are Whitman, you are Poe, you are Mark Twain, you are Emily Dickinson and Edna St. Vincent Millay, you are Neruda and Mayakovsky and Pasolini, you are an American or a non-American, you can conquer the conquerors with words.”