Listening for God in Unusual Places: The unorthodox faith of Robert Frost 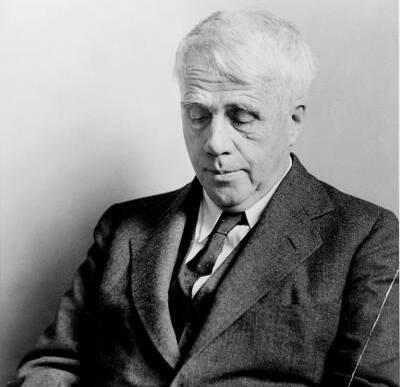 Thirty years ago, I met Robert Frost’s close friend, Rabbi Victor Reichert, who lived only a mile down the hill from the poet in Ripton, Vt. Reichert told me about the time Frost came to his synagogue in Cincinnati. There Frost delivered a passionate sermon, explaining to the crowd that he had no time for “irreligion.” He considered Scripture a live, ongoing revelation, and he considered himself a mouthpiece for the word. In describing this, Reichert seized my wrist, squeezed it and said: “I hear the voice of God in his poems. He was deeply spiritual. He was listening to God.”

Fifty years after Frost’s death, it is still hard to say exactly what sort of divine power Frost was listening to. The poet cannot easily be placed on the religious spectrum, nor can his lifelong quarrels with God be easily categorized. But any reader of Frost’s poems or observer of his public statements will know that he thought deeply about theological matters, and he wondered aloud about the relations between human beings and God. In 1947 he described himself in a letter to an old friend, G. R. Elliott, as “an orthodox Old Testament, original Christian,” but he claimed that his approach to the New Testament “is rather through Jerusalem than through Rome or Canterbury.”

The word lived in Frost, as a poet and teacher. But he shifted through many different views of what this word meant and how it should be expressed by him throughout his ongoing struggle to come to terms with the meaning of God. The struggle moved through his reading, which involved the Bible, Augustine, Aquinas, Pascal and Einstein. In his late poem “Kitty Hawk,” he claimed that his ultimate goal as a poet was “to say spirit in terms of matter and matter in terms of spirit,” a point of view that confirms his incarnational aesthetic.

Frost’s mother, Isabelle Moody Frost, was a Scot, and she was a devout follower of Emanuel Swedenborg. Swedenborg was a Christian mystic who began life as a scientist and, on Easter Day 1774, began to experience visions. One of his most important ideas was that of correspondence. That is, he believed that a relation existed between the material and spiritual worlds. Every aspect of nature revealed some aspect of divine providence. He preached the union of faith and charity in a Christian’s life, arguing that both were necessary for salvation. Mrs. Frost took her young son to a church founded on Swedenborg’s principles, and he absorbed a mystical sense of the world, an understanding of the universe that was founded on the idea that everything we see is a foretaste of things to come and that one must listen for the voice of God in unusual places, such as the wind in the trees or the ripples of lake water against the shore.

It should be noted that Frost’s father, William Prescott Frost, was a severe skeptic and a Harvard-educated journalist who worked on a newspaper in San Francisco, where Frost was born. William Frost had no time for religion, and young Robert would have had his father’s voice in his head long after the elder Frost’s death, when his son was only 11. One certainly hears a wry note of skepticism in Frost’s poetry. It is there in his wonderful sonnet, “Design,” which is a meditation on St. Thomas Aquinas, who argued that the design of the universe was itself an argument for God’s existence. “What but design of darkness to appall,” Frost wrote, noting that everywhere in nature one found aberrations, difficulties, harsh things. The sonnet is very dark indeed, and it remains the centerpiece in a bleak array of poems that reflect the poet in a somber mood. Reading poems like “Desert Places,” “Acquainted With the Night” or “The Most of It,” one can hardly doubt that Frost plumbed the deepest levels of depression.

I suspect that he was a manic-depressive, although that is hardly a professional diagnosis. He would sometimes walk for hours, chattering madly to anyone who walked alongside. He sometimes went to bed for days on end, keeping his shades drawn. He could spend weeks alone in his cabin in Ripton, hesitant to see anyone. Rabbi Reichert and several close friends of Frost told me that the poet was always mercurial, drawn either to intense socializing or austere solitude, with very little middle ground. He defined poetry as “a momentary stay against confusion,” suggesting that it was only in the clarity of the poem itself that he found solace, clarity and grounding.

Frost spent a lot of time reading Ralph Waldo Emerson, the great American essayist, who remains for me a core religious writer. Like Swedenborg, whom he read closely throughout his life, Emerson believed in deep correspondence between the natural world and the spiritual world. “Nature is the symbol of spirit,” he wrote in his essay “Nature,” one of the central texts of American religious thinking. Frost never lost interest in Emerson, and he returned to his essays throughout his life, rereading them, allowing Emerson’s philosophy of life to seep into his poetry.

Speaking to his friend Lawrance Thompson in 1948, Frost commented on his poetry in relation to God: “It might be an expression of the hope I have that my offering of verse on the altar may be acceptable in His sight Whoever He is. Tell them I Am, Jehovah said.” There was, indeed, a sacramental aura in his work from beginning to end, and one cannot read a poem like “Directive,” his last great poem, without noting his allusion to St. Mark near the end. In it, the poet wanders into the woods to seek revelation—a typical scenario in a Frost poem. In this instance, he happens upon the ruins of an old farmhouse, with a stream—”Too lofty and original to rage”—running nearby. There he finds a children’s playhouse, with a little goblet that reminds him of the Holy Grail. Frost describes the goblet as like one “Under a spell so the wrong ones can’t find it,/ So can’t get saved, as Saint Mark says they mustn’t./ Here are your waters and your watering place./ Drink and be whole again beyond confusion.”

St. Mark was commenting on the fact that Jesus spoke in parables, which had the effect of keeping out those, in some instances, who had yet to believe. Faith, in other words, was essential for understanding. One believes in order to understand, as Augustine (and Anselm) suggested, not the other way around.

Frost’s own poetry was “too lofty and original to rage.” Readers are baptized in the Jordan River of his poetry, where they drink and feel “whole again beyond confusion.” This is, in my view, sacramental poetry of a high order. It is beautiful and true, but it is also complicated, even thorny. The faith of Robert Frost was nothing straightforward. He was not a simple Christian, but his faith was real, it was profound, and pointed readers in directions where they might find solace as well as understanding, where they would find their beliefs challenged, where they find answers as well as questions.

Jay Parini, a poet and novelist, is the author of Robert Frost: A Life (Henry Holt) and Jesus: The Human Face of God (Houghton Mifflin, forthcoming in December 2013).

Show Comments (
1
)
Comments are automatically closed two weeks after an article's initial publication. See our comments policy for more.
Jake Bonar
8 years 11 months ago
Loved reading this article. Perhaps the most poignant connections to be made with God are the ones made through the sacrament of things not always housed in a church or a temple. (Reminds me of a fantastic essay by Andre Dubus in which Dubus discusses the "sacrament" of making PB&J sandwiches for his daughters to take to school). The everyday can certainly contain glimpses of the profound, or as Frost may say, "stays against confusion."