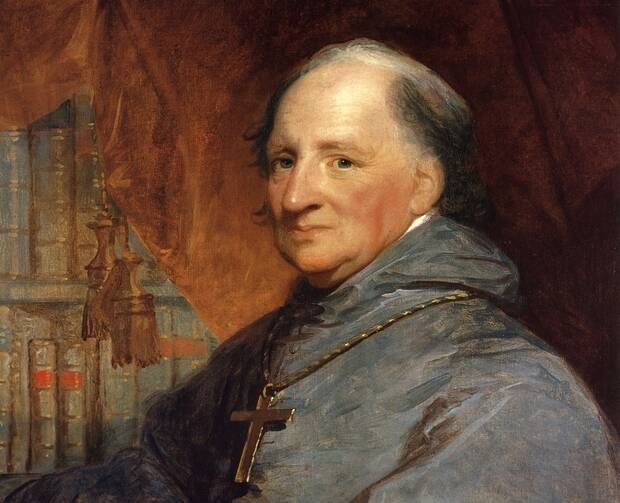 Can Catholics be Americans? In his new book, Our Dear-Bought Liberty, Michael D. Breidenbach offers a persuasive account of how Catholics have wrestled with this question since the earliest days of the Maryland Colony. In so doing, he exhumes treasures of great significance for our own time.

As Breidenbach sees it, religious liberty was tied to loyalty. If Catholics wanted to be tolerated, they had to prove their loyalty—first to the Stuarts, then to Parliament, then the House of Hanover and then the fledgling American republic.

This need to prove their loyalty put a kind of assimilation within reach for Catholics, albeit a tenuous one open only to elites. George Calvert, for instance, went public with his Catholic faith in 1625. Although he had to give up some of his government posts, he was permitted to run his colony of Maryland and was even created Baron Baltimore by King James I. The high-level efforts of John Carroll, a former Jesuit and the first bishop of Baltimore (and the United States), persuaded leading American statesmen like James Madison that Catholics were committed partisans of the independence effort and should be trusted with positions of responsibility in the new republic. Indeed, they could be granted religious liberty.

In the interplay between liberty and loyalty laid out by Breidenbach, U.S. Catholics will recognize many of the basic dilemmas they continue to face.

In other words, whatever the theoretical difficulties facing Catholics serving the British crown or the American republic, individual Catholics could overcome them. There was an element of contingency to such efforts. Careful, prudent and above all politically-powerful Catholics could help secure the blessings of liberty for their co-religionists, but those blessings were always at risk. After all, there were always arguments, from Anglican divines to John Locke, about the incompatibility of Catholicism and British citizenship; and kings or parliaments could deploy those anti-Catholic arguments when it served their interest.

Here, too, Breidenbach opens up new vistas on the history of religion in the American colonies. Catholics, he notes, did not counter such arguments by becoming more Protestant. They did marshal some ancient “anti-papalist” traditions in their own defense, as Breidenbach ably recounts. Prominent English Catholics, for example, resisted the naming of a Catholic bishop for England in 1624, ultimately forcing his resignation in 1631. Similarly, U.S. Catholics ensured that the first bishop named in the new country, John Carroll, was seen to be elected by his fellow priests in 1788 and not by Rome.

Such examples underline that many U.S. Catholics could turn to ample resources in their British past to address the difficulties of proving their fidelity to the Protestant-dominated state.

The political and theological were deeply intertwined in the world Breidenbach summons forth, and so the jealous rivalry between political and ecclesial authority never drops far beneath the surface. In his recounting, Catholics even today often address this issue by buying into the Erastian doctrine of many English monarchists, in which the church was largely subservient to the state. For students of politics, it becomes clear that many of the Catholics in Breidenbach’s story are Hobbesians: The state has full, uncontested authority, brooking no competitors.

A great attribute of the book is Breidenbach’s skillful blending of narrative and theory. ​​Our Dear-Bought Liberty finds much of its organizing structure as a kind of a roman-fleuve of the Calvert and Carroll families. And yet Breidenbach constantly attends to the concerns that animate his subjects and the questions and dilemmas that shape their pursuit of them. Breidenbach is a historian, but he writes history with a sensitivity to political theory, philosophy and theology. In one of many delightful details, Breidenbach notes that King Charles I wanted to name the colony of Maryland “Mariana,” a double tribute to his wife Henrietta Maria and the Jesuit Juan de Mariana. Breidenbach notes the irony of a soon-to-be-executed king taking an interest in a famous theorist of regicide.

Breidenbach clearly does not agree with John Courtney Murray, S.J., in all things, but he shares Murray’s sense that much that is good in modern politics has a premodern pedigree.

A guiding focus of the book is Maryland’s status as an exemplar of religious toleration. In fact, that story is more complicated than the founding myths of the United States. The fortunes of Catholics (and indeed many religious minorities) waxed and waned in the colonial period, and sometimes Catholics were the worst oppressors of other Catholics in their efforts to prove their royalist loyalties. And yet Breidenbach does not miss the crucial significance of Maryland in U.S. history: It was a testing ground that proved that religious pluralism and religious liberty could indeed complement one another.

Review: Who inspired the founders of the United States?
Michael Vaccari

The book also has its poetic moments. For instance, Breidenbach’s description of Cecil Calvert, second Lord Baltimore, deftly captures the changing fortunes of the Calvert family. Cecil never enjoyed the security of his father, and his young grandson at his side was never to be a peer of the realm. Breidenbach also records with brilliant narrative flourish the fate of an exquisite Flemish crucifixion scene by Peter Paul Rubens. The painting, obtained clandestinely through the wealth and power of George Calvert, was lost in the violence of the English Civil War, like so much life and limb.

While this is a distinctively modern story in historical terms, Breidenbach also adverts judiciously in the book to premodern political theory, and the reader is left wanting to know more about the conciliarists, John of Paris and other neglected thinkers. Breidenbach clearly does not agree with John Courtney Murray, S.J., in all things, but he shares Murray’s sense that much that is good in modern politics has a premodern pedigree.

In the interplay between liberty and loyalty laid out by Breidenbach, U.S. Catholics will recognize many of the basic dilemmas they continue to face. Whether they will be as adept at navigating them will be the task of future historians to assess.

This article also appeared in print, under the headline “Toleration and Assimilation,” in the May 2022, issue.