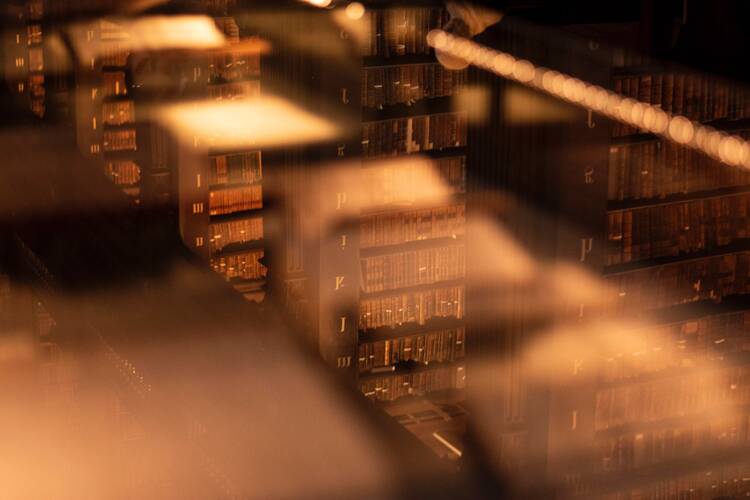 Willie James Jennings, a professor of theology and Africana studies at Yale Divinity School, has produced a convincing analysis of the racism baked into Western theological education in After Whiteness: An Education in Belonging.

In the opening chapter, Jennings recalls interviewing a young white man for a faculty position at Yale. His description of the interviewee sounded uncannily similar to many of my own colleagues at theology school:

A tall, dark-haired, baritone-voiced, perfectly groomed bearded man dressed like a professor in the middle of a celebrated career. He had 1.5 years of study in Germany, knowledge of German language, theology, biblical languages, seminars, blue suit, brown wingtip shoes, slow speech, legs crossed, quiet confident comportment. This US-born-and-raised scholar even spoke in the interview and during his public lecture with a slight German accent.

In my own studies, I noticed the male students began to take on the accoutrements that Jennings describes—horn-rimmed glasses, cardigans and beards.

Not only did I recognize the type, I recognized the desire that stirred within Jennings in response. During the interview Jennings notices his and his colleagues’ desire to imitate that image of whiteness.

I always looked longingly at anyone who had mastered German and Germany…. I had learned to love an intellectual form that performed white masculinist self-sufficiency, a way of being in the world that aspires to exhibit possession, mastery, and control of knowledge first, and of one’s self second, and if possible of one’s world.

It is this image of this bearded white man—the one fluent in German and French who can weave into his question in class a short philosophical history from Plato to Kierkegaard—that Jennings draws upon to guide us through his excellent treatise on theological formation in the academy. “Western education has offered us a distorted vision of what an educated person should look like, and we theological educators have accepted it,” Jennings writes.

Jennings uses the phrase “white self-sufficient masculinity” as a way of designating structures of whiteness or white supremacy in the theological academy. He defines it as “a way of organizing life with ideas and forming a persona that distorts identity and strangles the possibilities of dense life together.” Whiteness functions here as a symbol of mastery, of social power that functions by way of coercive dominance rather than dialogue.

The irony, as Jennings points out throughout the book, is that theology is fundamentally a discipline of humility. Of all the academic disciplines that ought to resist the coercive grip of whiteness, it should be theology, which is properly done, Pope Benedict XVI said, on one’s knees.

“We always and only work in the fragments,” writes Jennings. Theology as a discipline is a practice of grasping at fragments: of papyri, of collective memory, of the Godhead, of eternity. At its core, theology means clutching at the coattails of pure mystery. But that is easy to forget.

Of all the academic disciplines that ought to resist the coercive grip of whiteness, it should be theology, which is properly done, Pope Benedict XVI said, on one’s knees.

In my own studies, I noticed the male students began to take on the accoutrements that Jennings describes—horn-rimmed glasses, cardigans and beards. Oh, the beards. It is the rare male graduate student who does not stretch his facial follicles’ capacities in order to transform his chin into an advertisement of his philosophical prowess.

And, although beardless, I was not immune. I have 20-20 vision, but throughout graduate studies, I began to wish—not as facetiously as I would like—for eyeglasses. I remember thinking that what I said in class would sound better to myself if I wore glasses. I longed to conform in some way to the image of what I thought a competent scholar ought to look like. It’s a rather self-destructive wish—to hope for distorted vision.

Jennings analyzes the structures and designs of the academy that subtly reiterate to students that they are “not smart enough, mature enough, prepared enough to be in the theological academy. Even if such students remain in school,” he writes, “we have lost them.”

Jennings considers the constructive question: How does one build an education system free of these messages? How do you communicate to people they are worthy when the structures of society tell them over and over again that wisdom, expertise and power look like someone completely different from who they are? And how can an institution that has embraced a specific image of expertise grow beyond its fear that other forms of wisdom or knowing will in some way mar its excellence?

“Many administrators are afraid that ‘diversity’ means they will lose something in terms of the quality of their institution,” said Jennings in a discussion of his book. “It’s an unfounded fear,” he added.

It is unfounded, he says, because that version of intellectual excellence is bound up in whiteness, or what he calls “the logic of the plantation.” But theological education, Jennings argues, does not have to simply regurgitate the master’s rules in the master’s house. “After all, the God of the Christians was a crucified slave who cried and prayed to God for help, not a self-sufficient man,” he writes.

White supremacy is a mode of imagination, according to Jennings. It is sometimes difficult for us to see its influence on us because imagination is not an image we argue toward, but a perception or intuition from which we do our thinking. The assumptions and beliefs that underlie it can thus persist without our knowledge or attention.

The goal of theological learning is wisdom, Jennings argues, but so often, the academy values and forms humans instead for mastery—for mastering or dominating concepts—rather than for a wisdom born from the communal experience of faith and our own existential fragility. “Formation in theological education is a formation in communion and desire,” Jennings declares.

Theology’s purpose is not simply to attain or produce knowledge, but to clarify for the body of Christ its own understanding of itself.

Theology’s purpose is not simply to attain or produce knowledge, but to clarify for the body of Christ its own understanding of itself. And, as Paul states, exclusion and division have no place in the mystical body of the church, which is all union and belonging. “The cultivation of belonging should be the goal of all education,” writes Jennings.

What is at stake in the racial deformation of the theological academy? Why must theological institutions rid themselves of systems that have formed them for centuries? In a discussion of Jennings’s book, LaRyssa Herrington, a doctoral student at the University of Notre Dame, said that racism in theological formation threatens the identity of the church:

If we are one body united in Jesus Christ ontologically, then all of human particularity also exists within that body of Christ. The transcendent never hides human particularity—it accentuates it. When we privilege one particularity over another in the tradition, we lose the different facets of who God is.

The church, including its members in the academy, as Christ’s mystical body, is tasked with the imitation of Christ. Divisions within the church, particularly the division of racism, threaten the church’s mission. “Our salvation is at stake. When we lose the ability to conform to the image of Christ in a real, transformative way—that puts our salvation in jeopardy,” Herrington said.

Jennings argues for an institution that does not replicate structures of exclusion or division, but rather reflects the image of the body of Christ. The theological academy, Jennings suggests, should expand its imagination beyond the beards and spectacles of sameness, and seek wisdom and belonging in fragments of every race, gender and nationality who gather together in Christ. Jennings describes the institution built on resurrection as those who belong together in their shared desire for wisdom—and for God. He writes: “An institution is a sustained work of building. It is a joining aimed at eternity where people, seeking to create the new, commit themselves to a powerful repetition that they hope will never end.”