Review: Black Lives Matter and the call to conversion 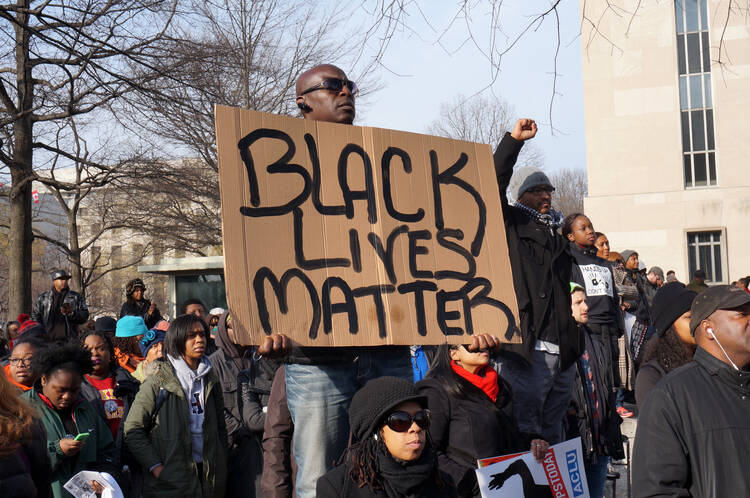 A protest against police brutality in Washington on Dec. 13, 2014. (iStock)

Olga Segura’s Birth of a Movement: Black Lives Matter and the Catholic Church begins by introducing readers to what the book is not. Segura intended her book to be “the Catholic version of Ibram X. Kendi’s How to Be an Antiracist; but then 2020 happened.”

Segura, a former associate editor at America, briefly recounts how the Covid-19 pandemic’s disproportionate impact upon Black and brown Americans and the national uprisings in response to George Floyd’s murder one year ago politically galvanized her and ultimately changed the course of the book.

Segura was not alone. A poll from Monmouth University in June 2020 showed that 90 percent of those polled had heard about George Floyd’s murder and the protests following it. Almost 60 percent found the anger of the protesters fully justified, and over 70 percent believed racism was a large problem in the United States.

Many Americans experienced a kind of conversion moment in 2020. Truth often finds us in moments of vulnerability— like when facing a strange illness or in stillness from being locked down in our houses. But even in an overwhelming moment of crisis, not all Americans—or all Catholics—have responded uniformly to the events of 2020. Segura’s book charts her personal journey of resisting systemic racism and her pain at finding herself unaccompanied on that path by many Catholics or by the institutional church. The church that formed Segura’s conscience through its tradition of social justice and care for the poor, she writes, has failed to be a leader in the fight against systemic racism.

Throughout the book, Segura draws on her own experiences to help guide the reader who may not have the same lived experiences of race in America. Her personal reflections are interspersed with appeals to the church’s white laity and bishops to stand with Catholics of color in fighting oppression.

Segura’s book charts her personal journey of resisting systemic racism and her pain at finding herself unaccompanied on that path by many Catholics or by the institutional church.

The book is most compelling when recounting Segura’s own awakening to the cause of racial justice. In her first chapter, Segura weaves the origins of Black Lives Matter with her own participation in the movement. Marches in New York City erupted after the acquittal of Daniel Pantaleo, the New York police officer who killed Eric Garner on Staten Island in July 2014. Segura joined these protests; and during one march, her future husband, Enoch, was arrested.

“I remember the way my heart stopped as I watched him being pulled into a police van,” Segura writes. She describes an interior shift as she realized the people she loved and valued were not valued by the authorities appointed to keep them safe.

Soon after, she read Pope Francis’ “Laudato Si’.” The pope’s writing resonated with the words of the activists with whom Segura marched. Both Francis and the Black Lives Matter movement “called on us to reject the very individualism that was creating the problems we had to combat.”

The contemporary civil rights movement known as Black Lives Matter addresses a variety of social issues: gun control, policing, prisons and U.S. economic systems. In under 150 pages, Segura touches on most of these issues and their intersections with systemic racism. In the process of covering a great breadth of material, the book’s structure is not always easy to follow. Readers unfamiliar with Segura’s subject material could become lost.

Nonetheless, two clear themes emerge from the book: the close relationship between racism and capitalism and the author’s call for the U.S. Catholic bishops to take a more actively pro-life stance against systemic racism.

Racism is an economic tool to manufacture inequality so that the rich get richer and the poor stay poor. Thus, social movements that fall short of economic reform will fail to effect any change.

Segura identifies capitalism as the social factor that cements racism into daily life in the United States. Racism is not an accident perpetrated by intentional bigots or an obsolete method of structuring society: it is a founding tenet of our country, encoded into the design of our neighborhoods, financial systems and workforce.

If Segura’s chapter on racial capitalism sparks questions, there are several other books available that delve deeply into the same topic. Sven Beckert’s Empire of Cotton studies how the cotton market promoted the rapid colonization of the Americas and launched a risky market-driven economy that depended on an easily exploitable workforce that could be paid little to nothing for its labor. The virtual enslavement of hundreds of thousands of Black Americans by the prison-industrial complex is incisively investigated by Michelle Alexander in her TheNew Jim Crow: Mass Incarceration in the Age of Colorblindness. The message of authors like Segura and Alexander is clear: the United States can surely exist without racism, but the question of what that country might look like has not yet been answered.

Segura notes that Black Lives Matter’s critique of U.S. economic systems has become a particular flashpoint for internet ire. (As is their pro-abortion stance, a ripe opportunity for moral what-about-ism.) But racism is an economic tool to manufacture inequality so that the rich get richer and the poor stay poor. Thus, social movements that fall short of economic reform will fail to effect any change.

Finally, Segura calls upon the bishops to emulate the example of leadership provided by the women of the Black Lives Matter movement and stand in solidarity with Black Americans fighting for the simple recognition of their human dignity. The killing of George Floyd should prompt each of us to ask why and how our culture co-exists so comfortably with the death of Black Americans. Yet, rather than self-examination, too many Catholic leaders have tended to focus their critiques on public protests, toppling statues or academic systems for analyzing race.

The killing of George Floyd should prompt each of us to ask why and how our culture co-exists so comfortably with the death of Black Americans.

Segura calls upon her readers to begin their reading with listening. Where is Christ calling them to surrender their power for the sake of the least of their brothers and sisters? “What does a church, one that is authentic and committed to helping marginalized voices, truly look like?” Segura asks.

White supremacy is the original sin of the United States. White supremacy is an invisible form of power, designed to be invisible to white people. To be white in America is to have the privilege of being “the norm” from which everyone else is “diverse.”

To take this sin seriously means to ask not only what personal conversion is needed, but also what conditions are necessary for change. What social conversion is required so the sin of racism—one whose stain we bear collectively, as members of an economic system we did not choose but in which we operate—can truly be washed clean from the soul of our nation?

For white people—myself included—reluctance to examine our own social power can often stem from resentment at being held responsible for something that seems beyond our power to solve. How can one person bear the guilt of a culture and system we did not ask to perpetuate or participate in?

The Christian tradition offers a model of what to do with power—merited or unmerited. Kenosis, from the Greek verb meaning “to empty,” describes Christ’s act of becoming human. Christ emptied himself of all power and took on “the form of a slave” (Phil 2:5-8).

Kenosis is the Christian template for how the powerful should act—the first make themselves last. Christians seeking justice—and their institutions—live out the call to imitate Christ by modeling that act of sacrifice and love.

This article also appeared in print, under the headline “Conversation and Conversion,” in the September 2021, issue.

Renée Darline Roden is a writer and playwright in New York City. She holds degrees in theology from the University of Notre Dame and an M.S. in journalism from Columbia University.