Review: Inside the very Catholic history of college basketball 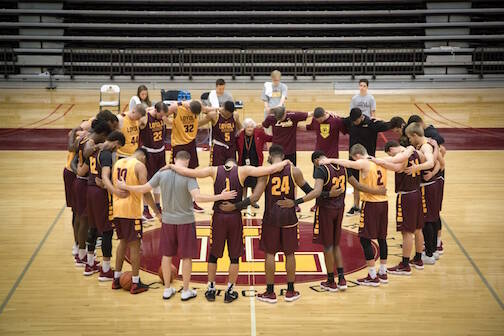 N.C.A.A. hoops fans often link Catholic colleges with basketball excellence. In Miracles on the Hardwood, John Gasaway investigates why. “If there were no game of basketball, Catholic colleges and universities would have been deprived of one of their defining characteristics in the public imagination,” Gasaway writes.

Miracles on the Hardwoodby John Gasaway

Gasaway examines the entire history of Catholic college basketball through Villanova’s third men’s national championship title in 2018. At times he whips through the years as quickly as Loyola Marymount moved the ball up the court during its record-breaking 122-points-per-game season in 1990. We see just how many different teams, coaches and athletes have contributed to this reputation for basketball excellence, from the University of San Francisco to Georgetown, Gonzaga and Villanova.

“Basketball was invented to save Protestant men’s souls,” Gasaway writes. When James Naismith, a Presbyterian, developed basketball in 1891, he agreed with the Y.M.C.A. vision of evangelization through sports. In the early 1900s, when Catholic colleges were losing students to secular universities, Jesuit institutions updated their Ratio Studiorum, the standard curriculum at Jesuit schools, by allowing students to declare a major and take a wider variety of classes—and many of them added basketball teams.

At times Gasaway whips through the years as quickly as Loyola Marymount moved the ball up the court during its record-breaking 122-points-per-game season in 1990.

Catholic intercollegiate athletics burgeoned, and the church soon began seeing sports as a way to enhance young men’s moral formation. In 1932, Gasaway writes, George Cardinal Mundelein of Chicago praised sports for “rescuing our boys from speakeasies, gangster hang-outs, street corners, and from the other temptations that lie in wait for discontented youth.”

Gasaway demonstrates how as basketball developed, Catholic basketball teams often leaped ahead of their competition when they embraced innovations: players conferring with coaches during timeouts, jump shots, shot clocks, slam dunks and three-pointers.

By far the most important change was the racial integration of the game. Catholic programs have often been credited with playing a praiseworthy role in integration efforts, Gasaway notes, a “credit that nevertheless acknowledges that the coaches in question were interested primarily in winning games.”

Through his minute analysis, Gasaway documents how each Catholic college team that achieved greatness did so through its own unique mix of talent, strategy and luck. But he notes, “even when wins are plentiful, Catholic teams can speak in the familiar language of the underdog."

This article also appeared in print, under the headline “Catholic hoops through history,” in the March 2021, issue.

Jenny Shank’s work has appeared in The Atlantic, The Guardian, The Washington Post and Image.