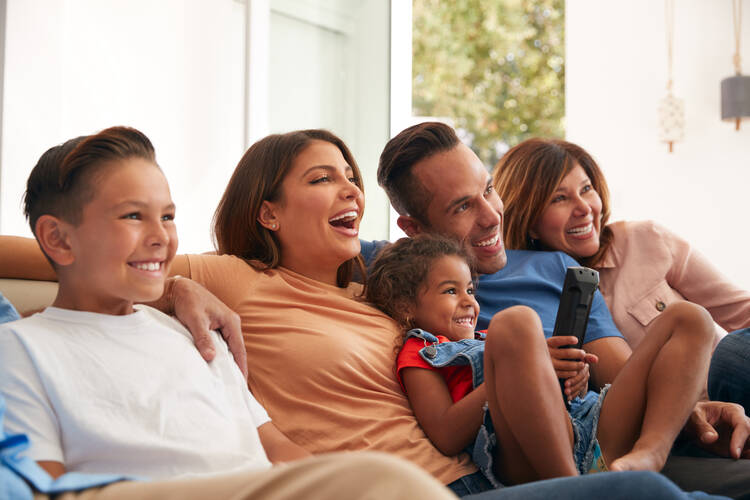 You do not have to look hard to find movies that celebrate the (sometimes unexpected) gift of life. Many Hollywood stories about pregnancies are inherently dramatic, especially when they force the main characters to make difficult choices. Here we offer some of those classic films, like “Juno” and “Bella,” along with other stories that celebrate life in all stages.

We hope you will add your own suggestions for pro-life films and television shows in the comments below.

Sister. Helen Prejean, C.S.J., is known worldwide for her work against the death penalty, and she was perhaps the most prominent voice denouncing the recent string of federal executions in the United States. This documentary “does not rely on hyperbole, nor does it declare Sister Helen a saint,” Ryan DiCorpo wrote for America, “concentrating instead on an accurate depiction of her life and work.” Stream on Tubi. Rent on Amazon or Apple.

You do not have to look hard to find movies and television shows that celebrate the (sometimes unexpected) gift of life.

13th. Ava Duvernay’s documentary about the 13th Amendment to the Constitution has become required viewing for those seeking to understand the history of racial oppression and its manifestation in the U.S. criminal justice system. Watch on Netflix.

Juno. “I’m not ready to be a mom. I don’t know what kind of girl I am,” Juno declares in Jason Reitman’s award winning film. So she offers her child up for adoption. This was the breakout role for Elliot Page (then Ellen Page), and it won screenwriter Diablo Cody an Oscar. The film manages to “spoof both the pro-life and pro-camp camps,” reviewer Michael V. Tueth, S.J., wrote in America. Rent on Amazon or Apple.

Philomena. The story of birth mothers is rarely told, on screen or elsewhere, but here Judi Dench takes center stage as the titular character in search of the son she was forced to give up for adoption when he was 3. “The film spurred debate in Ireland about the Catholic Church’s treatment of unwed mothers and its role in forcing them to give up their children for adoption,” Margot Patterson wrote for America. Stream on Roku. Rent on Amazon.

Dead Man Walking. Sister Helen Prejean first came to the world’s attention with this Hollywood treatment of her memoir about her death row ministry. Susan Sarandon won the Oscar for best actress, and Sean Penn was searingly memorable as the convict Matthew Poncelet. Stream on HBO Max. Rent on Amazon.

Children of Men. This film based on the novel by P. D. James imagines a world where humans can no longer reproduce—and what happens when a woman miraculously conceives. You do not have to look hard to find the moral of this story. Stream on Peacock. Rent on Amazon or Apple.

Hotel Rwanda. Don Cheadle was nominated for best actor for his portrayal of Paul Rusesabagina, the owner of a hotel who, along with his wife, protected over 1,000 people from slaughter during Rwanda’s 1994 genocide. Stream on Starz. Rent on Amazon or Apple.

Stories about pregnancies are inherently dramatic, especially when they force the main characters to make difficult choices.

Schindler’s List. Steven Spielberg’s 1993 epic film remains a stirring and monumental testimonial to the power of one man to fight for life in the face of evil. Stream on Peacock. Rent on Amazon or Apple.

Amistad. The story of a slave ship that was captured by Mende prisoners who had been abducted from Africa became a major international story when their ship arrived in America in 1839. Steven Spielberg’s 1997 film explores a signal injustice and a country struggling with its own divisions over slavery. Stream on HBO Max. Rent on Amazon.

Bella. A young, single woman discovers she is pregnant—and it is going to cost her her job. But she finds kinship with her boss’s brother, who encourages her to keep the baby, in part to deal with his own demons from his past. There is nothing sappy or pious about this film: The pregnant woman, Nina, makes compelling arguments for her autonomy over her own body. Stream on Tubi. Rent on Amazon or Apple.

Life, Above All. This South African film shows what it is like to live with AIDS while only briefly mentioning the disease. The film, Ricardo di Silva, S.J., writes in Thinking Faith, is about “embracing the various forms of love (and the pain that ensues when it is lost), the responsibility that one life has to another, and finally; accepting death—whenever it comes.” Stream on Amazon.

Amazing Grace. William Wilberforce lobbied Parliament for decades to abolish slavery. This film based on his life takes its title from the world famous hymn that was written by his mentor John Newton, a slave trader who became an abolitionist. Rent on Amazon or Apple.

Unplanned. This film has drawn some criticism because of the no-holds-barred political style of its subject, Abby Johnson, but “No matter what you think about the legality of abortion, “Unplanned” will get under your skin,” Emma Winters wrote for America. “‘Unplanned’ invites an empathic response by showing the messy parts of Johnson’s life—including the two abortions she had in her early 20s.” Rent on Amazon.

Queen of Katwe. Who doesn’t love a feel good sports movie? (I guess we do, according to Disney’s algorithms.) This one, about a young chess champion living in the slums of Kampala, Uganda, is also a portal into the lives of the poor and what they are forced to do to survive. It is a reminder that genius can blossom under even the most adverse conditions. Stream on Disney+.

Gilmore Girls. This fan favorite might seem like an unusual pick, but the core of the show is founded on the idea of life. It centers on the bond between Lorelai, a carefree single mother, and her academically inclined daughter Rory, who she became pregnant with as a teenager. Watch on Netflix.

Bridgerton. This pick is a stretch, but more than one reviewer (including our own Simcha Fischer) has noted the show’s surprising portrayal of marital sexuality as unitive and procreative. The show also offers joyful and nuanced depictions of big families. Watch on Netflix.

Eight is Enough. Speaking of big families, we couldn’t neglect this 1970s classic. Imagine: Dick van Patten raising an ornery brood on a journalist’s salary. And not a car seat in sight. Rent on Amazon.