In Good Faith: Review of 'Philomena' 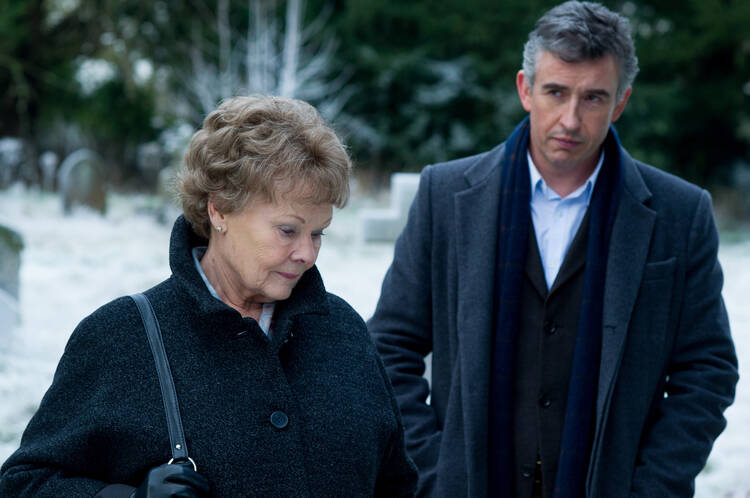 Over the past weekend I saw “Philomena,” a lovely, gentle movie about a woman’s hunt for the son she was forced to give up for adoption decades earlier. Based on a true story by Martin Sixsmith and published in 2009 as The Lost Child of Philomena Lee, the movie stars the peerless Judi Dench as Philomena and Steve Coogan as Sixsmith, the journalist who helps her track down her son. Both actors are being mentioned as likely Oscar nominees for their roles, and Coogan as a nominee for the screenplay he co-authored. In a brief but enchanting performance, Sophie Kennedy Clark appears as the young teenage Philomena living in a home for unwed mothers run by a Catholic convent in Roscrea, Ireland.

Two atypical love stories propel the movie: Philomena’s undying love for Anthony, the son she has not seen since he was three and whom she has spent her life looking for, and the relationship that develops between her and the cynical Sixsmith, who is covering her story for a British newspaper. The second relationship gives the movie its humor and introduces questions about faith, forgiveness and judgment likely to linger in viewers’ minds after they leave the movie theater. As they search for the adult Anthony, Sixsmith, a non-believer, and Philomena, a Christian, respond to the stonewalling they receive from the convent sisters with very different attitudes, attitudes that have everything to do with their religious convictions or lack of them.

Before going to the movie, I had no idea there was any particular controversy about it. Since seeing it, I’ve learned that it has spurred debate in Ireland about the Catholic Church’s treatment of unwed mothers and its role in forcing them to give up their children for adoption, often, as in the case of Philomena’s son, to wealthy Catholics in the United States. One film critic for The New York Post accused the film of being an attack on the Catholic Church, a charge Philomena Lee, now 80 and living in London, has vigorously disputed.

The liberties the movie took with the book have also been debated. Philomena Lee was not always the faithful Catholic she is depicted as in the film. Either to make her a more distinctive character, or to sharpen the contrast between her and the journalist, she is portrayed as a little more simple and unsophisticated than she is in real life. The filmmakers also play with events involving the arch-villain of the movie, Sr. Hildegarde, shown in the film as a bitter, repressed nun whose crabbed interpretation of faith leads her to take vindictive satisfaction in Philomena’s suffering when she’s in childbirth and who years later deliberately withholds information from Philomena about her son’s whereabouts. The real Sr. Hildegarde died years before Martin Sixsmith ever came on the scene and the confrontation in the film involving her, Sixsmith and Philomena never took place. Sisters at the convent in Roscrea, where Philomena and her son lived in the 1950s, have complained that the film offers a misleading picture of the events that took place there.

Most of the people seeing “Philomena” won’t know these details. And indeed, none of them much matter. Interesting and even important as questions of factual accuracy and context are, “Philomena” is a feature film, not a documentary, and has to stand on its artistic merits. This it does, offering an affecting story artfully told, wonderful performances from its cast and a thoughtful portrayal of the role played by religion and the religious in an historical and apparently all too common injustice in Ireland.

Good storytelling in film is not uncommon. What is more unusual are the filmmakers’ interest in the spiritual issues raised by the story they tell. It’s a rare movie today that examines what it means to be a Christian and how that alters a person. “Philomena” does. As critical as it is of the harsh treatment accorded unwed mothers by Catholic sisters in Ireland, the movie isn’t simplistic. Nor is it anti-religious. The ongoing discussion about religion that takes place between Philomena and Sixsmith as they travel in search of her son pits the apparent simplicity of Philomena’s faith against the doubts and misgivings of the Oxford-educated Sixsmith. The moral outrage expressed by the witty, intellectual Sixsmith at the wrong done to Philomena years earlier may articulate the feelings of most moviegoers, but it’s Philomena’s faith, willingness to forgive and kindness that we are moved by as viewers. Sixsmith’s religious doubts seem superficial and shallow, in contrast.

If you’ve had enough of holiday shopping and the commercial fa-la-la that goes with how Americans celebrate Christmas, you may want to slip away to see a movie that treats faith honestly yet respectfully. “Philomena” may break your heart while watching it, but you won’t feel bored, exploited or patronized. You may even feel uplifted by a movie that doesn’t sugarcoat loss and its lingering wake. Bad things happen in “Philomena,” but if there’s any neat message to be drawn from it, it’s that faith matters; love endures.

Margot Patterson
Show Comments (
2
)
Comments are automatically closed two weeks after an article's initial publication. See our comments policy for more.
JUAN JARAMILLO M D MR
9 years 1 month ago
I am (still) Catholic. I watched the movie last night. And I fully agree with this review. What these Nuns did was unbelievably cruel and evil, at so many levels. Every piece of dirt from within the Church needs to be aired. Every last one of them. Just like we do when we go to confession. The film is NOT anti Catholic. It is just real. The example of Philomena Lee is deeply Christian. And she IS the Church too. So even though all these scandals tempt me, for a while, to leave the Church, I stay. I stay because of people like Philomena. Because I too am able to produce evil works, and the Sacraments help ME to do better. We all (from the Pope down), and in a very real sense, need a Saviour. That's what Christmas is all about. So the timing of this movie is not bad. It should be seen by all Catholics.
Carolyn Disco
9 years 1 month ago
Here's a little real-life context from an article in the Guardian, "The Catholic Church Sold My Child" 9/18/09 http://www.theguardian.com/lifeandstyle/2009/sep/19/catholic-church-sold-child When her pregnancy became obvious, her family had Philomena "put away" with the nuns. After her baby, Anthony, was born, the mother superior threatened Philomena with damnation if ever she breathed a word about her "guilty secret". Terrified, she kept it quiet for more than half a century. "All my life I couldn't tell anyone. We were so browbeaten, it was such a sin. It was an awful thing to have a baby out of wedlock ... Over the years I would say 'I will tell them, I will tell them' but it was so ingrained deep down in my heart that I mustn't tell anybody, that I never did." I was intrigued to know why the nuns had been so insistent on the importance of silence and secrecy. The answer, almost certainly, lay in what had happened next. Philomena was one of thousands of Irish women sent to convents in the 1950s and 60s, taken away from their homes and families because the Catholic church said single mothers were moral degenerates who could not be allowed to keep their children. Such was the power of the church, and of Archbishop John Charles McQuaid, that the state bowed before its demands, ceding responsibility for the mothers and babies to the nuns. For them it was not only a matter of sin and morality, but one of pounds, shillings and pence. At the time young Anthony Lee was born, I discovered that the Irish government was paying the Catholic church a pound a week for every woman in its care, and two shillings and sixpence for every baby. And that was not all. After giving birth, the girls were allowed to leave the convent only if they or their family could pay the nuns £100. It was a substantial sum, and those who couldn't afford it – the vast majority – were kept in the convent for three years, working in kitchens, greenhouses and laundries or making rosary beads and religious artefacts, while the church kept the profits from their labour. Even crueller than the work was the fact that mothers had to care for their children, developing maternal ties and affection that were to be torn asunder at the end of their three-year sentence. Like all the other girls, Philomena Lee was made to sign a renunciation document agreeing to give up her three-year-old son and swearing on oath: "I relinquish full claim for ever to my child and surrender him to Sister Barbara, Superioress of Sean Ross Abbey. The purpose is to enable Sister Barbara to make my child available for adoption to any person she considers fit and proper, inside or outside the state. I further undertake never to attempt to see, interfere with or make any claim to the said child at any future time." Philomena says she fought against signing the terrible undertaking. "Oh God, my heart. I didn't want him to go. I just craved and begged them to please let me keep him. None of us wanted to give our babies up, none of us. But what else could we do? They just said, 'You have to sign these papers.'" It is heartbreaking to read of the intransigence of the nuns when mother and son came searching separately decades later. There were painful consequences for both of not knowing the truth. "Now in her 70s, and five years after visiting her son's grave for the first time, Philomena is remarkably devoid of bitterness. ...But she blames herself for everything, for giving her son away and for not speaking out about him earlier, when things could have been different: "If only, if only. I curse myself every time I think of it. If only I'd mentioned it all those years ago, maybe he wouldn't ... Oh Lord, it makes my heart ache! I'm sure there are lots of women to this very day – they're the same as me; they haven't said anything. "It is the biggest regret of my life and I have to bear that. It is my own fault and now it is my woe." I'd say Sr. Barbara's treatment of Philomena speaks for itself.