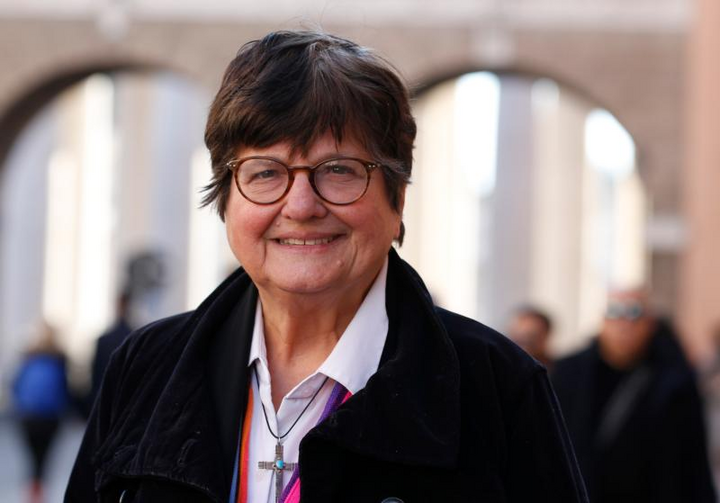 St. Joseph Sister Helen Prejean, who has worked in prison ministry and against the death penalty for decades, is pictured in Rome Jan. 21, 2016. During a meeting the same day, Pope Francis asked Sister Prejean about the case of Richard Masterson, a Texas man who was executed the previous day. (CNS photo/Paul Haring)

This depiction of the joyous, indefatigable Sister Helen appears in the recent documentary, “Sister,” airing now on PBS affiliate stations. As many America readers know, Sister Helen has spent nearly four decades ministering to prisoners on death row and conducting a campaign against capital punishment.

The man she is rejoicing for is Richard Glossip, who was convicted of ordering the 1997 murder of Barry Van Treese and has lived on death row in Oklahoma for over 20 years. His conviction has spurred sustained media coverage and attracted controversy surrounding what many consider flawed or insufficient evidence of his guilt. Supported by Sister Helen, Glossip maintains his innocence; the Facebook page “Richard Glossip is Innocent” has over 12,000 followers.

On Sept. 16, 2015, when Sister Helen, a member of the Sisters of St. Joseph, visited the state penitentiary in McAlester, Ok., for Glossip’s scheduled death by lethal injection, he was granted a stay of execution by an Oklahoma court. Glossip remains on death row today.

“The best stuff in life is mutual. We give to each other,” she said to the incarcerated Glossip.

A Louisiana native whose deep Catholic faith is front-and-center in the documentary, Sister Helen is the former national chairperson of the National Coalition to Abolish the Death Penalty. She received the “Pacem in Terris” Award from the Diocese of Davenport, Ia., in 1998 for her peace efforts.

The film is measured in its depiction of Sister Helen. It does not rely on hyperbole, nor does it declare Sister Helen a saint, concentrating instead on an accurate depiction of her life and work. “I like the fact that she was not a hero, that she made mistakes,” said Susan Sarandon, who won an Academy Award for playing Sister Helen in the 1995 film, “Dead Man Walking.” The film’s screenplay was adapted from Sister Helen’s best-selling book of the same name.

“The best stuff in life is mutual. We give to each other,” said Sister Helen Prejean to the incarcerated Richard Glossip.

To its benefit, “Sister,” directed by Joe Cardona and José L. Vázquez, does not focus exclusively on Sister Helen’s work against the death penalty but also discusses her early life and spiritual formation. It will likely surprise viewers to hear that, in her younger days, arguably the most famous activist woman religious in the United States wanted little to do with social justice efforts, her primary concern being religious instruction. That changed when she attended a lecture by another sister on social justice and Christ’s relationship with the poor.

“She said, ‘Integral to the good news Jesus preached to poor people was that they would be poor no longer.’ And I sat up right in my seat...and it was like ka-boom,” said Sister Helen. The film presents Sister Helen, with her charisma and warm Southern drawl, as akin to a modern-day Virgil from Dante’s Divine Comedy, a woman of faith whose fighting spirit and radical empathy guides others towards Christian compassion.

It will likely surprise viewers to hear that, in her younger days, arguably the most famous activist woman religious in the United States wanted little to do with social justice efforts, her primary concern being religious instruction.

Portions of “Sister” are not really about its titular figure at all, but about those who have been inspired to reject capital punishment and an appetite for vengeance or retribution. Some examples include a man who lost his daughter in the 1995 Oklahoma City bombing and then befriended the parents of Timothy McVeigh, one of the convicted bombers, and two men who became friends after one man’s son killed the other’s in the 1999 shooting at Columbine High School.

“I’m very conscious that the way grace happens is we wake up,” said Sister Helen.

Whether the viewer agrees politically or spiritually with Sister Helen—or whether the viewer is morally outraged by the kindness she shows towards violent criminals like the Boston Marathon bomber Dzhokhar Tsarnaev—is not the point of this film. “Sister” seeks rather to be a portrait of conviction and an investigation into how one person, on a journey with God, can make a difference.

Show Comments ()
Comments are automatically closed two weeks after an article's initial publication. See our comments policy for more.
Show Comments ()
Join the conversation: Login or create an account
Before you can comment, you need to update your profile to include your first and last name, as required in our comments policy. Then reload this page and you'll be set up for commenting. Update your profile
Advertisement
More: Death Penalty / Women Religious