Netflix’s ‘Bridgerton’ is a feminist disaster. But it (almost) redeems itself. 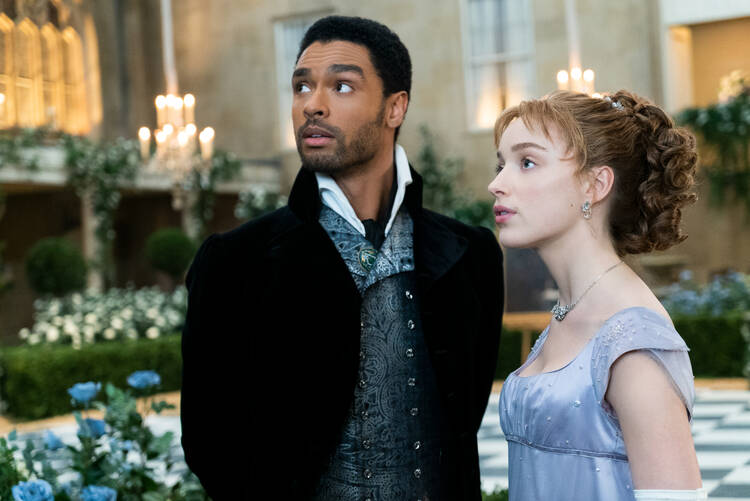 It is not just that “Bridgerton” is full of deliberate anachronisms. Anachronisms can work if the show understands the rules and knows how and why to break them, or else if the show is just so much fun you will forgive anything. But “Bridgerton” knows nothing, understands nothing and provides zero fun. It somehow turns graphic sex scenes into a slog. Its putative, clever outrageousness is just a multicolored explosion of clichés. Whether or not it’s faithful to the series of romance novels on which it’s based, I do not know; but the show we got is a mess and nothing else. At least at first.

The show is a mess and nothing else. At least at first.

In the first few minutes of the show, Prudence Featherington (the daughter of one of two prominent families vying to make brilliant marriages while a mysterious, omniscient voyeur distributes brochures gossiping about high society) is mercilessly laced into a tight corset while her mother looks on approvingly.

This is the beginning of a nearly nonstop jeremiad on the callous mistreatment of women during this era. Every episode has at least one woman delivering lamentations on the subject of How Society Is Unfair To Women. I thought often of the scene in “Blazing Saddles” where several vicious cowboys beat up an old woman. In between punches to the gut, she looks straight into the camera and cries, “Have you ever seen such cruelty?” The feminism of “Bridgerton” is that subtle.

And they are not wrong. It’s a hard world out there in “Bridgerton.” Lots of sexism, plenty of objectification. The problem is, much of that sexism and objectification comes from the writing itself. Two of the sisters complain that, in this society, artists see women purely as decorative objects, mere “human vases” to gawk at. Within minutes, we transition to their older brother, who is also trying to liberate himself from this same artificially constrictive society. He achieves his liberation by visiting an artist’s studio, where he is delighted to find not only a casual orgy, but naked models standing around in candlelight, for you to gawk at. Why the first scene is sexist and the second one is awesome, don’t ask me.

“Bridgerton” puts a merciless squeeze on the audience in all the wrong places, for no reason at all.

There are too many examples of this double standard to list. The show self-righteously excoriates society for its shallow focus on outward appearances, but in the same breath indicates to the audience that certain characters are evil or foolish by making them fat, or slightly buck-toothed, or by giving them puffy hair. Ugly dudes are evil when they attack girls, but sexy dudes are just impetuous, and true love means trying to save them.

Remember the first scene, with the tight corset? Once the girl is crushed into a tiny hourglass shape, she steps into an empire-waisted dress, which is gathered under the bust and then flows freely past the waist. And there it is. “Bridgerton” puts a merciless squeeze on the audience in all the wrong places, for no reason at all. Have you ever seen such cruelty?

The viewer shall also endure the laziest, most moronic attempt at fancy, old-timey speech you shall ever hear, shalln’t you? I barely made it through the first four episodes. I only continued because I wanted to be fair and thorough.

And darn it, that’s when the show turned a corner.

Not a very big corner. But for a show as ungodly and unwieldy as “Bridgerton,” it is a miracle it could change course at all. Whether someone took a machete to the script, I don’t know; but around episode 5, the plot stopped frittering around and started going somewhere. It started asking questions more complex than, “Why are men, am I right, girlfren?” and instead began to probe issues like, “What is marriage for, anyway?” and “Is it really okay to do anything it takes if you are trying to take care of your family?” and “What should love look like, and can that change over time?”

Don’t get me wrong: The primary tool in the second half of the season was still a sledgehammer. The plot still made very little sense and was still full of unacknowledged contradictions and allegedly catastrophic, easily solvable dilemmas. Simon and Daphne, the Duke and Duchess of Sexytimes, still had all the depth of cardboard, and the few interesting and likeable characters just were not given enough to do.

Are we really supposed to believe that it’s all right to deceive and betray an honest young man, just because society is so hard on women?

But in spite of myself, I started wondering if the show had more up its ruffled, spangled sleeves than the first half made it seem. When the oldest brother tells Siena (they named a character “Siena”) that he wants to be “free of rules, free of society!” is he just flying the show’s freak flag, or will freedom prove to be enough? Are we really supposed to believe that it’s all right to deceive and betray an honest young man, just because society is so hard on women? When the duke teaches Daphne that sex is just the natural continuation of masturbation, is this supposed to be an enlightened view, as it’s first presented, or does he describe it that way because he still has a lot to learn?

I’m still not entirely sure. But in the final episode, they showed us (and yes, they actually showed us) something I’ve never seen on TV before: sex between a husband and wife that was explicitly both procreative and unitive.

It was still, like most of the sex in the show, ludicrously male-centric: violent, devoid of foreplay and about two minutes long. But nevertheless, it seemed to signify something good and meaningful, something more than just pleasure-seeking with someone who has legal rights to your dowry. “Bridgerton” starts out promising to sassily explode the strictures of a tight-laced society and ends up taking a brief but surprisingly gentle and thoughtful look inside the demands of authentic love.

“Bridgerton,” like many of its characters, redeems itself before the end.

I was also pleasantly surprised to see family life with lots of children repeatedly portrayed as something that can make both men and women happy.

Also surprisingly authentic, amid the breathless glitz and pointless intrigue, was the theme of men in deep pain behaving badly because they feel inadequate and don’t know what to do about it. For all the facile “have you ever seen such cruelty”-style feminism, the plot ultimately didn’t rest with the idea that men are bad and women are put-upon; instead, it actually requires men to do better, to live up to their obligations, to grow up, to face their weaknesses and to change. It does not just rail against a bad world; it shows the makings of a better one.

Or maybe I just have Stockholm syndrome. Maybe I am just desperate not to have lost almost nine hours of my life to a show that lends dignity to the working class by portraying them—and I am not making this up—selling rats on a string.

There is also a scene where Daphne gets her period so suddenly and violently that she all but screams and collapses Liz Lemon style. Not one, not two, but three major plot points hinge on the idea that women in the 1800s did absolutely nothing to care for themselves during their menses, but just randomly started bleeding on their brocaded silk as society looked on in horror.

Wait, is this why they call it a period piece?

So I suppose “Bridgerton,” like many of its characters, redeems itself before the end. But I, unlike its characters, haven’t made any foolish but unbreakable vows to stick around; so if there’s a second season, I won’t be watching, even if only because it had so much graphic and unpleasant sex. The worst part was, you couldn’t skip those scenes, because they were important to the plot. And in “Bridgerton,” once you take out the bang, all that’s left is a simper.