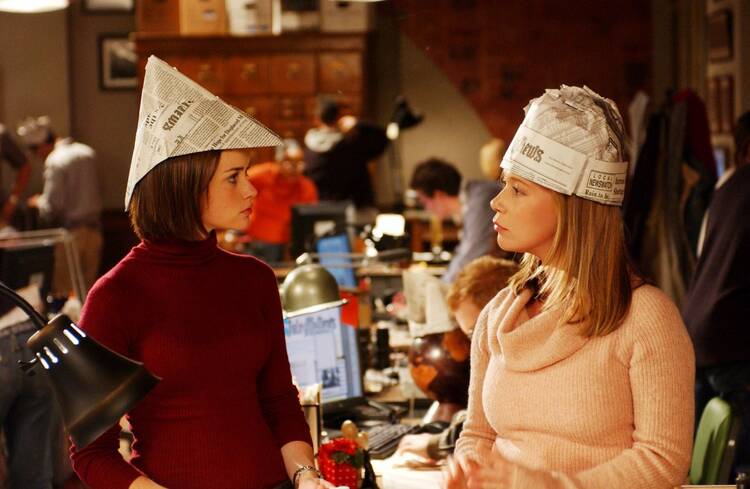 When I first got into “Gilmore Girls,” my mother was perplexed. She wondered why I—a 20-year-old college boy whose regular interests included superhero movies and video games—was suddenly enraptured by a nearly two-decade-old TV series about a single mother, Lorelai, her teenage daughter, Rory, and their quirky town. But from the moment I started watching “Gilmore Girls,” I found it easy to watch and endlessly relatable to any parent and child with a semi-tumultuous relationship. Naturally, I goaded my mother into watching it with me.

Soon enough, she too grew obsessed with the show and its kitschy portrayal of New England Americana, with its out-of-the-way inns and charming townsfolk. In fact, she quickly outpaced me as the biggest fan of the show within our household. The moment I heard my father start complaining about Lorelai’s impetuousness in casual conversation, I realized he was enthralled, too—though he won’t admit it.

It was decided soon after we finished the show for the first time that we would embark on something of a cultural pilgrimage to New England, in order to determine which town best emulates the charm of Stars Hollow, the fictional town where “Gilmore Girls” is set.

The show’s charm had always rested on the relationship between its principal mother-child duo, and the same was true for this trip.

What started as a mild curiosity soon evolved into a journey that would take us through a sizable chunk of southern New England.

While Rory’s high school, Chilton, was entirely fictional, her alma mater of Yale in New Haven, Conn., was very much not. (The show did not, however, film on the premises—they built a replica of the campus in California that was suspiciously dotted with palm trees.) As we drove around, the influence of New Haven on the show’s later seasons became obvious. The rundown area in the immediate vicinity of the campus reminded me of Rory’s shabby apartment; the luxury high-rise dorms next to the school similarly had an air of Logan Huntzberger (Rory’s preppy college boyfriend) to them. I promptly failed to break into the Yale Daily News building in my fruitless search to see if their real-life newsroom resembled the one that Rory worked in on the show.

After our tour of New Haven, my parents and I checked into our abode for the evening: a bed-and-breakfast in Simsbury, Conn. Of course, it might as well have been the Dragonfly Inn for how we ended up treating it. As soon as the manager arrived to show us to our room, my mother began chatting to her incessantly, Lorelai-style, as if “Gilmore Girls” creator Amy Sherman-Palladino herself had scripted it.

‘Catastrophe’ looks at humanity in all its messiness
Jim McDermott

We journeyed next to Provincetown, Mass. Though it wasn’t Stars Hollow, Provincetown embodied that same lively and colorful spirit. It was the little eccentricities: a waterfront bookstore manned by an aggressively political clerk who had opinions on basically everything; a store filled to the brim with Halloween and Christmas decorations in spite of the fact that it was the middle of the summer; an old-fashioned candy shop decked out in ’50s chic (not unlike the one Taylor eventually puts up next to Luke’s diner in the show).

I failed to break into the Yale Daily News building in my fruitless search to see if their real-life newsroom resembled the one that Rory worked in on the show.

Compared with Provincetown, Boston felt almost like an afterthought. We stopped by the bar from “Cheers,” if only to give my father something to write home about on this trip, but our main stop would be Harvard, where Rory visited while deciding on which school to go to. My mother fell in love with one specific archway featured in the show—which was actually filmed at U.C.L.A.—and the one we found was close enough to satisfy my mother’s whims. (I am convinced that visiting the campus had more to do with my mother’s love of the Joe Pesci film “With Honors,” also set at Harvard, but she would probably deny that.)

Even if to non-fans our trip seems like a haphazard tour of New England, my “Gilmore Girls” pilgrimage energized me in a way I did not expect. Of course, a large part of that was about whom I got to spend that time with. The show’s charm had always rested on the relationship between its principal mother-child duo, and the same was true for this trip. Much of the vibrancy of the pilgrimage came from my parents, particularly my mother, with whom I had no end of pithy back-and-forths during long stretches of highway.

In the end, our pilgrimage achieved what the show was always great at doing: bringing family together, despite the ups and downs.