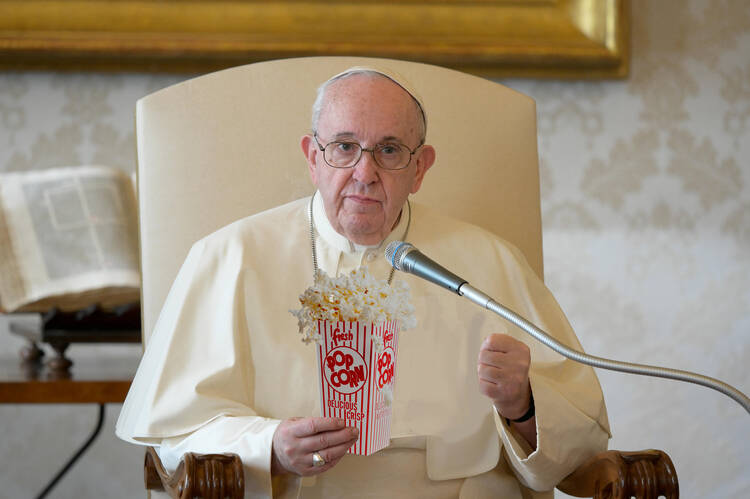 You know one thing Pope Francis needs more of? Unsolicited advice from American Catholics. Especially on subjects he cares deeply about. He has mentioned over the years that he is a huge movie buff (he loves “Babette’s Feast,” possibly the first film to make it into a post-synodal apostolic exhortation), with a special place in his heart for Italian directors Mario Camerini, Federico Fellini and Roberto Rosselini. This gave us the idea to ask America’s staff and contributors to suggest a film Francis might add to his Netflix queue. (Although we are fully aware he doesn’t have a Netflix subscription. He reportedly doesn’t watch TV!)

Some of these films might not be up to the level of Francis’ favorites, like Camerini’s “The Spirit and the Flesh,” Fellini’s “Orchestra Rehearsal” and “La Strada” and Visconti’s “The Leopard,” but these suggestions all include a reason or two why Francis might like the film in question. And news reports this past weekend that he had cancelled his appearances for much of this week due to sciatica suggest that maybe he should take some time on a comfy couch with a Fanta (oh wait, that is Pope Emeritus Benedict XVI’s beverage of choice) and enjoy one or two of these flicks.

Francis has mentioned over the years that he is a huge movie buff (he loves “Babette’s Feast,” possibly the first film to make it into a post-synodal apostolic exhortation).

Is it possible that Pope Francis loves to boogie on a Saturday night? I’m thinking—based on his relationship with tango and that one time he told a group of kids that to dance “is to experience joy and happiness”—the pope would deeply understand the soul of “Billy Elliot.”Dad wants him to box. Billy wants ballet. This 11-year-old boy in the brick-hard working-class reality of County Durham, England, could soften even the world’s hardest knuckles with his relentless authenticity and the sheer joy in his feet. It is only so long that we can avoid the truth of ourselves, and it is only so long that we can stay sitting in the chairs society assigns to us. Creation was made to dance.
-Erika Rasmussen, Joseph A. O’Hare Fellow

I would love to give Pope Francis a DVD of “District 9,” the science fiction story of alien refugees trapped in poverty-ridden camps in Johannesburg, South Africa, and the human bureaucrat tasked with driving them out. For me, the film captures the journey from prejudice and fear to love, something Francis so often preaches about. It’s a story about facing the way we project monstrosity onto others—and the grace that comes with finally facing it in ourselves. I would also very much like simply to hear Pope Francis talk about aliens.
-Jim McDermott, S.J., contributor

Based on his relationship with tango and that one time he told a group of kids that to dance “is to experience joy and happiness”—I think the pope would deeply understand the soul of “Billy Elliot.”

The central couple in this Israeli film, depressed Moshe and gritty, hopeful Malli, are played by real-life husband and wife Shuli and Michal Bat-Sheva Rand. Moshe and Malli have returned to Orthodox Judaism; but childless and stuck in poverty, they fear their suffering means they don’t have enough faith. Sukkot, the feast commemorating the Exodus, brings unexpected guests—with nasty secrets from Moshe’s troubled past. The plot twists that follow are as suspenseful as they are heartwarming. This prayerful film about hospitality as both mitzvah and trial suggests the pope’s vision of social solidarity in “Fratelli Tutti.”
-Eve Tushnet, contributor

There’s a vibrant film community in the papal homeland of Argentina, but its reigning auteur is Lucrecia Martel—someone with whom Francis is likely to be familiar, even if he doesn’t watch TV. Martel’s latest, the award-winning “Zama,” is based on the novel by another compatriot, Antonio de Benedetto (1922-86). Ravishingly beautiful, intellectually rigorous and existentially disquieting, it concerns a functionary for the 18th-century Spanish Crown whose efforts to escape his Paraguayan outpost—and his role in the subjugation of the locals—leads to personal compromises, betrayals and suffering on an epic scale. Visually poetic, it is a political/spiritual allegory about the role of Europe in the Americas and an individual’s place in the universe.
-John Anderson, contributor

I know Pope Francis would love “Of Gods and Men,” the story of the martyrdom of seven Trappist monks in Algeria in 1996. It’s one of the few movies I’ve ever seen that explains what martyrdom means, and that convinces the viewer, “Yes, I would have done the same thing.”
-James Martin, S.J., Editor at Large

I know Pope Francis would love “Of Gods and Men,” the story of the martyrdom of seven Trappist monks in Algeria in 1996.

“Millions” is a movie about two brothers in England. There is a robbery of a lot of money and the younger kid talks to saints, like St. Teresa of Ávila, who is super chill and smokes and really doesn’t care what anyone thinks. The movie gets scary too. It’s not preachy; it’s just that the saints are part of this kid’s life, and he is a great kid. It is by Danny Boyle, who is also the director of my second recommendation,“Yesterday,” about a failing singer-songwriter; it so happens that a storm falls one night and suddenly no one in the world has ever heard of the Beatles. Except the singer-songwriter. And he has a guitar. And a voice. Beautiful music and moral conflict ensue.
-Joe Hoover, S.J. Poetry Editor

Through a series of interviews with big tech whistleblowers, “The Social Dilemma” unpacks how the machines behind popular social media websites have “learned” to addict us and manipulate our behaviors, breaking down our real-life relationships even to the point of destabilizing entire nations. Pope Francis has spoken prophetically about some of the symptoms of social media use, but when it comes to diagnosing the root problems, he starts to show his age. I want to give the pope a deeper understanding of social media and machine learning just so I can ask him, as the world’s spiritual director, “What should we do in response?”
-Colleen Dulle, Assistant Producer of Audio and Video and host of “Inside the Vatican”

I consider “The American President,” directed by Rob Reiner and written by Aaron Sorkin, one of the great “president movies,” alongside “Air Force One,” “Lincoln” and others. It’s a wonderful model of American leadership. After four years of despair under an unfit president, it is easy for us to forget the ideal that our executive leadership should strive for. Sorkin’s masterclass in governmental leadership is one of the best. With renewed interest in U.S.-Vatican relations, there is no better time for a reminder of what good U.S. leadership looks like.
-Kevin Christopher Robles, Joseph A. O’Hare Fellow

This 1996 Stanley Tucci film is all about sacramentality and moving beyond superficiality to find real relationships—both with each other and with the more meaningful elements of life. Two brothers find to their great frustration that running an authentic Italian restaurant in a culture where every guest just wants spaghetti and meatballs is no easy task, but they shoot for the moon with one grand dinner party that they hope can change their fortunes. Maybe everything doesn’t go as planned, but Pope Francis would like the way they “make a mess.”
-James T. Keane, Senior Editor

Correction 08/10/21: An earlier version of this article mistakenly included Alessandro Manzoni, author of one of Pope Francis' favorite books, and the theatre director Luchino Visconti in the list of film directors Pope Francis admires.