The Monks of Tibhirine: Xavier Beauvois' 'Of Gods and Men' 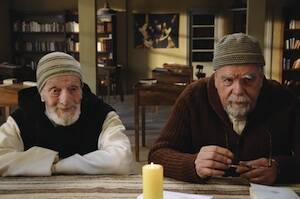 Like Easter, the film Of Gods and Men, by the French director Xavier Beauvois, is based on a murder story. This story concerns the abduction and beheading in 1996 of seven Trappist monks by Islamic extremists in Algeria. Although Beauvois is not in the allegory business, his parable is a Passion play of a very modern sort, one in which each character has to crush the gnawing worm of his own mortality and doubt and thereby remain true to his faith. The result is one of the more profoundly spiritual films of this year or any other.

Despite the prepositional mischief of its title (Can anyone avoid thinking “Of Mice and Men”? Or, better still, “Of Human Bondage”?) “Of Gods and Men” is a serious movie and a violent one. Not all the mayhem arrives via the bloodletting of the Mujahadeen or the counter-brutality of the Algerian military. Although this French-made Sony Pictures Classics release (originally “Des Hommes et des Dieux”) is set in a monastery of Trappists living the contemplative life, the battle each man wages for his soul and conscience is intense. If one were looking for an intellectual and spiritual “Rambo,” this would be it. The tension created, not by the dramatization of physical peril so much as spiritual peril, is palpable—the soul’s equivalent of a car chase replete with flaming wreckage.

They lead a rigorous existence, these monks. The landscape around an unnamed village near Tikrit in Morocco (in fact, it was Tibhirine) occupies some middle ground between lush French countryside and scrubby desert. The Monastery of Our Lady of Atlas is also a community center for its Muslim neighbors, a place for medical care from the aged Brother Luc (played by the French film legend Michael Lonsdale) or advice from the intellectually inclined prior, Christian (Lambert Wilson).

Like the rest of their religious brothers, Luc and Christian are poster boys for personality types. Luc looks kindly and bearish, and is. Christian appears hawk-eyed, intellectual and slightly pinched; even his haircut shouts “French intellectual.” The fretful Brother Christophe (Olivier Rabourdin) wears a worried, mournful look, even while tilting his watering can over the carpet of edible greens he cultivates; the bright-eyed, aged Brother Amédée (Jacques Herlin) is possessed of a constitutional twinkle; the haunted-looking Brother Paul (Jean-Marie Frin) has a past only hinted at, and his expression suggests that he, and perhaps others also, would rather not have his calling questioned. The allegiance the casting shows toward surface appearances is significant, given the central crisis of the film, which concerns not only life and death, but also identity and truth.

Who are the gods and who are the men? As healers, teachers and abstainers from most worldly pleasures, the Trappists are looked upon by their Muslim neighbors as occupiers of some lofty plane; perhaps the monks themselves have indulged similar thoughts while going about their daily business, tending the needs of their constituency, caring for one another and participating in their daily prayers, whose chanting can be heard intermittently throughout the movie. As he does with the scenes of monks chanting the psalms, the director imbues each aspect of the monastery’s daily life with nobility, purpose and the suggestion of divine gravity.

But the sense of physical security that rises out of routine is quickly torn asunder, first by the slaughter of some immigrant workers at a nearby construction site, then by the Christmas Eve invasion of the monastery by fundamentalist militants, led by the ferocious Ali Fayattia (Farid Larbi). Fayattia, figuratively disarmed by Christian’s steadfast refusal of aid—and his recitations from the Koran—decides to leave, trailing begrudging respect but none of the monks thinks he is gone for good. Their garden of sanctuary having become a target for terrorists, each brother begins, in a sense, sweating blood.

This is the heart of the film. Congregating around their kitchen table, the brothers—though not all—counter Christian’s argument that they must stay put. “We didn’t elect you to decide things on your own,” they tell him. The group is rattled; some members want to flee. Christian’s leadership is questioned, as is each individual conscience. The brothers have devoted themselves to a mission, aspiring to live in imitation of Christ, and the moment of truth has arrived: What does it mean if they leave? What will they mean, as men, if they leave? Each monk experiences a different level of fear, but all share the same crisis of mortality. Everyone dies, they know. The question is how well.

Beauvois’s ability to crawl inside a real event, invent unknowable but plausible possibilities about it and then use the fiction to illuminate greater truths is nothing new, even if few others have used fact on behalf of such transcendent fiction. Oliver Stone tried it, many would say unsuccessfully, in “World Trade Center,” which embellished the experiences of trapped rescue workers. “Das Boot,” years ago, imagined the hothouse atmosphere of a German U-boat and the existential crises of its crew. The recent “127 Hours,” about an imperiled young explorer, borrows from a real event to make larger statements. If most of these examples seem to be about men, they are. But there are other examples.

Although the filmmaking couldn’t be more different, “Of Gods and Men” strongly evokes “Black Narcissus,” a 1947 film by Michael Powell and Emeric Pressburger, about conflicted nuns in a Himalayan convent. In that film, the crisis was about sensuality. In “Of Gods and Men” it is about survival. But both films are set within a community in which hardship and deprivation are personal choices made out of spiritual commitment and in which that commitment is intruded upon by a temporal world that can never be entirely shut out. The alternately disturbing and comforting conclusion is that communities may come and go, but the fate of the soul is a personal responsibility from which there is no escape.

There may be viewers who are immune to the qualities found in “Of Gods and Men,” who cannot share the sense of dread and uncertainty that affect its characters. They will probably, then, also be immune to the joy Beauvois bestows on certain scenes, such as one in which Brother Luc, in a gesture of defiant optimism, opens two bottles of wine and puts on a tape of “Swan Lake” (the inherent fatality of which is unremarked upon but poignant nonetheless). As the music plays, each man occupies the frame for a valedictory moment. Each of those memorable faces warms under the gaze of the camera; the blood rises to the surface of the skin, illuminating each with his own humanity.

It is cinema, of course, but vaguely miraculous just the same.

John Andersonis a film critic for Variety and The Washington Post and a regular contributor to the Arts & Leisure section of The New York Times.