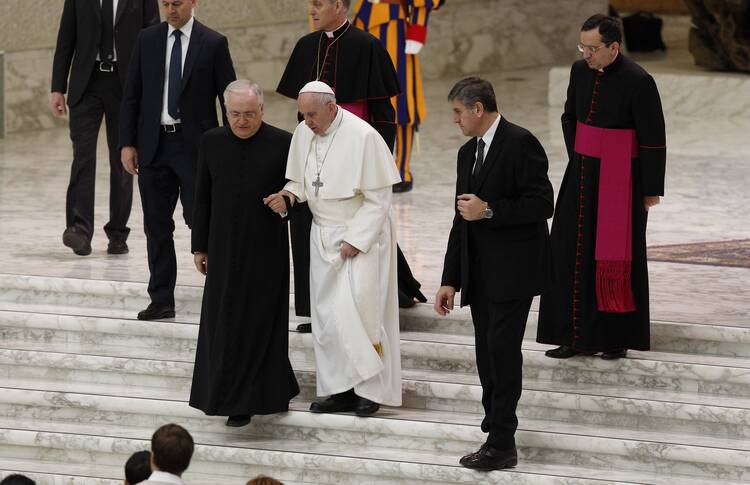 Pope Francis has decided to cancel his appearance at three events that he had planned to lead in the coming days, including the concluding prayer for the Week of Christian Unity and an important address to the Vatican diplomatic corps, because he is suffering from sciatica, a painful nerve condition.

The director of the Vatican press office, Matteo Bruni, announced the cancellations this Saturday evening, Jan. 23. Nevertheless, he said that Pope Francis would preside at the Angelus prayer on Sunday at midday, which suggests that his problem is not as serious as past flare-ups.

It is the second time this year that the pope has suffered a bout of sciatica; he had to cancel a vespers service on New Year’s Eve and the Mass for World Peace on Jan. 1, but he seemed to have recovered. Pope Francis has suffered from sciatica for decades, and in 2007 he was paralyzed by the condition for several days. His sciatica is also the reason why he walks unevenly. He copes with it with massage treatments and the help of a physiotherapist. It is presumed that the same will be true this time.

It is the second time this year that the pope has suffered a bout of sciatica; he had to cancel a vespers service on New Year’s Eve and the Mass for World Peace on Jan. 1.

Mr. Bruni said that “[b]ecause of the return of sciatica, the celebration of the Mass tomorrow morning (Jan. 24) will not be presided over by the Holy Father, but by Archbishop Rino Fisichella.” Tomorrow’s Mass will focus on Scripture, and is meant to encourage Catholics worldwide to devote more time to the study and prayerful reading of biblical texts. Archbishop Fisichella was chosen to substitute for the pope because he is the president of the Pontifical Council for Promoting New Evangelization.

Mr. Bruni also announced that the pope would not deliver his annual greeting and address to the ambassadors from the more than 180 countries that have diplomatic relations with the Holy See. The event has been postponed from Monday morning, Jan. 25. Mr. Bruni did not give a date for when it would next be held.

Finally, the Vatican spokesperson said Pope Francis would not participate at the vespers service for the closing of the Week of Prayer for Christian Unity on Monday, Jan. 25, in the Basilica of “Saint Paul outside the Walls” in Rome. Cardinal Kurt Koch, the president of the Pontifical Council for Promoting Christian Unity, will do so in his stead.