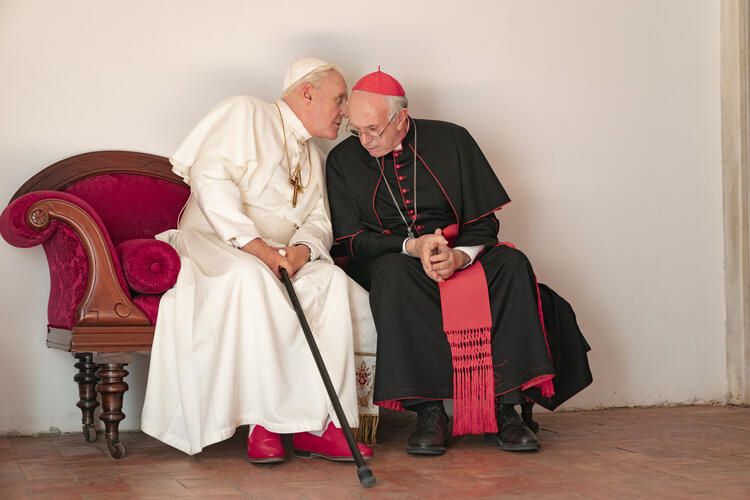 The release of “The Two Popes” on Nov. 27 brought renewed attention to the papacy of Benedict XVI (played by Anthony Hopkins) and the 2013 election of Pope Francis (played by Jonathan Pryce). But does the movie get the facts right? Yes and no.

Was Cardinal Bergoglio a contender at the 2005 conclave?

Yes, Francis (then Cardinal Jorge Bergoglio) was Cardinal Joseph Ratzinger’s nearest rival by the time of the third ballot. Cardinal Ratzinger (soon to be Pope Benedict XVI) was five votes shy of the required 77 necessary for election; Cardinal Bergoglio received 40 votes on the ballot (thus he was the “runner-up”).

Bergoglio was a candidate for two reasons. One, he was well-known within the Latin American hierarchy for his participation at bishops’ conferences and had a stellar reputation for his pastoral work. He gained wider notice in church circles when he became a stand-in for Cardinal Edward Egan at a Vatican synod in the days after the 9/11 attacks, when Cardinal Egan had to return to New York. His summary of the meeting on such short notice was widely praised and gained him attention. And when Ratzinger was on the cusp of election in the 2005 conclave, Cardinal Bergoglio urged his brother cardinals to throw their support to Ratzinger, thus assuring his election, to Bergoglio’s obvious relief—he got to go home to Argentina.

When Cardinal Ratzinger was on the cusp of election in the 2005 conclave, Cardinal Bergoglio urged his brother cardinals to throw their support to Ratzinger, thus assuring his election.

Two accounts of the 2013 conclave differ. In his book, The Election of Pope Francis: An Inside Account of the Conclave that Changed History, Gerard O’Connell, America’s Vatican correspondent, reports Cardinal Bergoglio emerged as Pope Francis after five ballots, with 85 votes. Anthony McCarten, whose book The Pope: Francis, Benedict and the Decision That Shook the World provides the basis for “The Two Popes,” reports that Pope Francis was elected after six ballots, with 90 votes. When he was elected, he received friendly encouragement and comfort from his friend, Cardinal Claudio Hummes (emeritus bishop of São Paulo, Brazil), who urged him to “remember the poor,” thus giving Bergoglio the incentive to give himself the new papal name of Francis, after the saint from Assisi.

Did Jorge Bergoglio and Pope Benedict XVI meet to discuss Bergoglio’s retirement, as dramatized in the film?

No. This is a dramatic recreation of the facts. When bishops approach the required retirement age of 75, they are required to submit their resignation for the final disposition of the pope, who can extend a bishop’s tenure in office or accept it with alacrity. (Cardinal Bergoglio had already made plans for retirement when he selected a simple apartment in a house not far from where he grew up in Buenos Aires and where he served as the cardinal archbishop.)

This does not mean that Pope Benedict never met Bergoglio in the Vatican; he would have when the Argentine bishops made their “ad limina” visits.

Yes, he often had a glass of Fanta when playing the piano. According to The Young Catholic blog (from 2010), a visiting English bishop was going to present His Holiness with a case of Holy Grail beer, a British brand, but discovered that Pope Benedict drank at least 4 cans of the soda every day! He also drank it at dinnertime. And why Fanta? Maybe because it was originally made in Germany. (When this story became public the company that owned the Fanta brand, Coca-Cola, promised to send the pope a few cases of Fanta so he wouldn’t run out.)

I don’t know that this is true. His primary recreations are playing the piano and his scholarly pursuits in theology. According to Time Magazine, apart from watching the 8 p.m. news, he would watch old movies based on “The Little World of Don Camillo” series of books by Giovanni Guareschi about an Italian parish priest wrestling with the local Communist mayor.

I suspect that the insertion of this supposed “papal favorite” of Benedict XVI was something of a tongue-in-cheek allusion: a show about a German shepherd being watched by a “German shepherd.” Before being elected pope, Benedict had been Pope John Paul II’s prefect of the Congregation for the Doctrine of the Faith, the office responsible for doctrinal orthodoxy. Cardinal Ratzinger’s reputation as the doctrinal “watchdog” earned him nicknames such as “God’s Rottweiler.” So I think the movie’s writers were having a little fun by making the allusion.

“Kommisar Rex,” about a detective squad and their crime-fighting dog, is an actual series. You can watch an episode here.

How accurate is the portrayal of Jorge Bergoglio’s actions during the Dirty War in Argentina?

These flashback scenes are largely consistent with the reporting on this period in Bergoglio’s life. Bergoglio had to walk a fine line in those days and, as he said, it was “crazy” for someone in his thirties to be made provincial of the Argentine Jesuits at such a contentious time.

According to reporting from the Associated Press, Francisco Jalics and another priest, Orlando Yorio, were kidnapped in 1976. “Bergoglio has said he told the priests to give up their work in slums for their own safety, and they refused,” the A.P. reported. “Yorio, who is now dead, later accused Bergoglio of effectively delivering them to the death squads by declining to publicly endorse their work.” Bergoglio did later reconcile with Father Jalics and they did celebrate Mass together, as portrayed in the film. Bergoglio also did try (however imperfectly) to save the two Jesuits when they were being tortured by the regime.

Did Francis did spend a period of “exile” in Córdoba?

Yes, he was removed to Córdoba after his period as provincial. He was far removed from the center of church activity in Buenos Aires; he spent his time in the “backwater” in deep reflection—two years—while doing pastoral work, teaching and hearing confessions. It was there that he learned to live a simple way of life, which he carried with him as a cardinal and as pope. People considered it almost a “resurrection” when he was named co-adjutor to Cardinal Antonio Quarracino of Buenos Aires with the right to succession to his post upon the cardinal’s death. When Bergoglio became the archbishop of Buenos Aires, he had his predecessor’s vestments altered and wore them instead of purchasing new ones, very much in keeping with his lifestyle of simplicity.

It is highly improbable that a pope would consult a cardinal from the other side of the world who was not part of the Curia or an “insider.”

Is the story of the betrayal of Benedict XVI by his butler true?

Yes. Benedict pardoned Paolo Gabriele, who was given an 18-month jail sentence, in 2012 for stealing personal documents and other papers from the pope’s office and giving them to an Italian journalist, which became the basis of the book His Holiness: The Secret Papers of Benedict XVI, commonly known as the “Vatileaks” scandal.

Did Francis disagree with Benedict’s decision to resign?

This scene from the movie is another dramatization of the facts. In the books that I have read, this “consultation” never happened. It is highly improbable that a pope would consult a cardinal from the other side of the world who was not part of the Curia or an “insider.” Showing both men meeting and hashing out their different worldviews in the Vatican gardens and the Sistine Chapel made for great drama, and contrasted the two churchmen’s approaches to the church to great effect.

Pope Benedict XVI speaks in new interview: ‘There is one pope, he is Francis’
Gerard O’Connell

Did Benedict tell Francis about his resignation plans before anyone else?

According to Gerard O’Connell, Benedict made this decision entirely on his own and only told his personal secretary, Msgr. Georg Gänswein, his brother, Father Georg Ratzinger and Cardinal Angelo Sodano, the Dean of the College of Cardinals—no one else.

Did Francis call Benedict before his announcement as the new pope?

Both Peter Seewald, in his book Benedict XVI: Last Testament, and Gerard O’Connell report that this is true. It took a while before anyone in Benedict’s entourage answered the phone, but the two men talked before the formal announcement was made. Benedict was greatly touched by the new pope’s gesture toward him.

Is Francis a fan of the San Lorenzo soccer team?

Yes, he has been a fan of San Lorenzo ever since his youth; his father was also a big fan of the club. Francis’ football allegiance is a central part of the biography of his early and later life.

Did Francis and Benedict watch the World Cup together when Argentina played Germany?

That is doubtful. Benedict is not a known fan of any sport, so it is doubtful he would spend time watching sporting events on television. However, the final scene of the two popes watching a football match was rather funny, and made funnier still by Benedict’s reaction to how the game was played.

Show Comments ()
Join the conversation: Login or create an account
Before you can comment, you need to update your profile to include your first and last name, as required in our comments policy. Then reload this page and you'll be set up for commenting. Update your profile
Show Comments (
1
)
Comments are automatically closed two weeks after an article's initial publication. See our comments policy for more.
Zac Davis
3 years 1 month ago