Pope Francis: ‘I Have Not Watched Television Since 1990’ 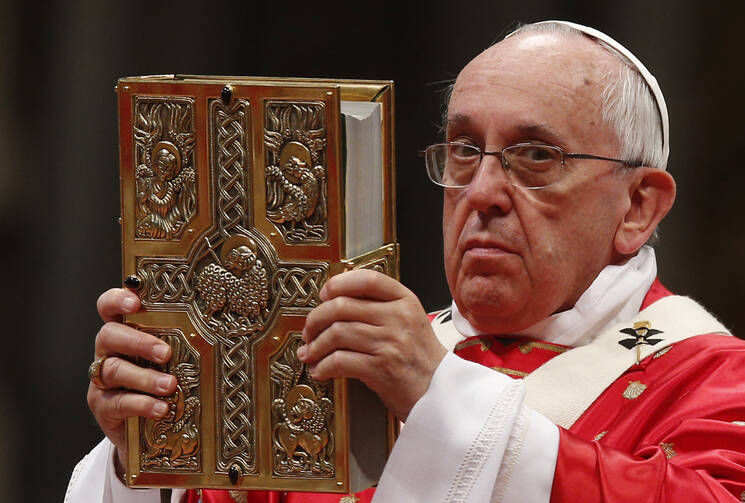 Pope Francis, in a new interview, reveals that he sleeps “profoundly”six hours a night, hasn’t watched television since 1990, has asked the Lord that if there is an attempt on his life that he not feel much physical pain, and considers “poverty, corruption and human trafficking” as the three great evils in the world today.

He reveals this and much more in an interview, of great human interest, published on May 24 in La Voz del Pueblo, the newspaper of Tres Arroyos, a small town, 500 km south of Buenos Aires.

“I’m normally in bed at nine and I read almost until ten, and when tears begin to come in my eye I switch off the light” and then “I sleep profoundly... for six hours,” Francis told Juan Beretta, an Argentinian reporter sent by the paper to interview him. He said he wakes by himself at four in the morning—“it’s the biological clock.”  But, he confided that later in the day he feels the need for “a siesta”, so he takes off his shoes and sleeps on the bed for 40 minutes to one hour, and “again I sleep deeply, and I wake by myself.” But, he said, the day he misses his siesta, “I feel it!”

He confirmed again that he never dreamt he would become pope. “Never!”  He’d intended returning to being a priest, a confessor after his term of office as a bishop in Buenos Aires.  He admitted that he was listed among the ‘papabili’ (possible candidates to succeed John Paul II) in 2005, but said that inside that conclave it was clear that Ratzinger was the candidate and he was elected “almost unanimously”.  But on the eve of the 2013 conclave, he recalled that he was considered too old, “nobody thought of me”. He was even quoted at 46-1 by the London bookmakers.  At most, he said he was mentioned as ‘kingmaker’.  In actual fact, however, “there was no clear candidate” at this second conclave, and he was elected.

He revealed that before the final vote, “I felt much peace” and “I thought ‘if God wants it..’, and so I felt at peace.  And while they were counting the votes – it was never ending - I prayed the rosary, tranquilly.” My friend, Cardinal Claudio Hummes, was beside me and, in the vote before the definitive one, he told me, “Don’t worry, this is how the Holy Spirit works.”

Asked to explain his ‘magnetism’, Francis said he couldn’t.  He added that some cardinals have told him it is because he is speaking in a way that people understand, such as when he spoke on the day of the interview – May 20, about the children of separated parents, and how at times one parent speaks badly of the other, and the child has to handle all this.

As for living in the Vatican’s guesthouse of Santa Marta, Francis stated yet again that “I feel well when I am with people, I get good vibes...it’s as if my life is to be involved with people. Psychologically I cannot live without people; I am not made to be a monk.”  He lives in Santa Marta with some 40 other priests who work in the Holy See, and he eats in the common dining room with them.  He says mass in the chapel and four days a week many people attend his mass, including people from Roman parishes.  “I like that very much”, he declared.

Asked what he’s afraid of, Francis stated that “in general I am not afraid. I am quite fearless; I go ahead without weighing the consequences.”  As for the possibility that someone might make an attempt on his life, “I am in the hands of God" - he said- "and in my prayer, I speak about it to the Lord, and I tell him: “Look, if this has to be, let it be, I only ask you one grace: that it does not hurt me."  He explained that he considered himself "a coward in this regard.  I am not afraid of an injection, but I prefer not to have problems with physical pain.  I am intolerant (with this). I take it as something that has been with me since I had an operation on my lung when I was 19 years old.”

The Jesuit pope admitted that he feels “under pressure” at times, “like any person who governs”, and noted that right now his work is “very intense; I am conducting a very strong rhythm of work. It’s the end of the school-year syndrome, which here terminates at the end of June.”

In his early life Bergoglio was very interested in football (soccer), and used to go to the stadium with his dad,  but in the interview he revealed that he has not watched television since 1990 – “when I made a promise to Our Lady of Carmel on the night of 15 July 1990” . He no longer watches football games but ever week a Swiss guard gives him the latest results.

He said he only reads one paper - the Italian middle-class daily, La Repubblica, and even then he only glances through it in less than 10 minutes.  He does not navigate on the internet, he said, and up to recently “I was taken by panic when I had to give interviews”, but he no longer feels that way thanks to “the state of grace” (of his office as pope).

He admitted that it is somewhat “utopic” to think that poverty can be eradicated, but added that “the utopias pull us forward.”  He emphasized that “there are three things that all of us should keep in life: memory, the capacity to see the present, and utopia for the future.”

He repeated that he considers that sometimes “spanking a child” – but not slapping in the face – can help correct the child.  He recalled that when he made that remark some time back he was criticized by some countries that have “very strict” laws and even punish the mother or father if they slap their child.  He said he found it “curious” that countries that have such strict laws “for the protection of children” are also countries that have laws that allow for the killing of children before they are born. “These are the contradictions with which we live today”, he stated.

Francis has often spoken about “the importance of crying,” so when asked by the Argentine reporter if he cries, he responded by revealing that when he sees “human dramas” he is “profoundly moved.” A case in point was when he heard about the Rohingya migrants (from Burma) who were adrift in the waters off the coast of Thailand last week, and were only given food but then were sent back to sea. He said he’s also been “deeply moved” when he sees very sick children, “with rare diseases.” He confided that he’s “moved” too when he visits prisons and talks or eats with the inmates, as has happened a number of times over the past two years. “I think then that I too could be here (in prison), because none of us can be sure that we would never commit a crime that would merit imprisonment,” he declared. “I ask why did God permit that I am not here?” He recalled that he’s had chances that those in prison have not had and said “this leads me to cry internally. I feel that a lot.”

Asked what he most misses since he’s become pope, Francis responded without hesitation: “being able to walk tranquilly on the streets, and going to a pizzeria to eat a good pizza.”

When questioned why he’s always asking people to pray for him, Francis replied,  “It’s because I need to be sustained by the prayer of the people.”

As the interview ended, the Argentine reporter asked Francis how he would like to be remembered. He said, he hoped people who remember him “as a good guy, who tried to do good.”

Text of interview in Spanish: http://www.lavozdelpueblo.com.ar/nota-27095--aoro-ir-a-una-pizzera-y-comerme-una-buena-pizza

Gerard O’Connell
@gerryorome
Show Comments (
4
)
Comments are automatically closed two weeks after an article's initial publication. See our comments policy for more.
Jack Rakosky
7 years 6 months ago
I hope Francis becomes a model for many more people to abandon TV: “During high school I gave up television for Lent (except for Bishop Sheen). That began a lifetime of low television viewing. In comparison to the average American male, if I had completely given up television between college and retirement I would have gained 4.5 years of waking time to do things other than watch television. That is the equivalent of more than six weeks of vacation per year.” See the rest of the case for doing things other than watching TV here: http://www.praytellblog.com/index.php/2011/03/28/television-time-use-lent-and-the-divine-office/
James Sullivan
7 years 6 months ago
Francis inspires me greatly-- who said All Things in Moderation? I can moderate how much I watch TV-- which is not much now for me-- to watch Francis ' installation as Pope was thrilling television--
James Sullivan
7 years 6 months ago
Great interview. There is this absolute humanity that comes through with Francis. Decency. How many people would admit " there for the grace of God go I " when he visits a prison. Depend ding on circumstances we could have been in prison too. I think Francis lives with great gratitude and always in the presence of God. He's a very smart man who had allowed the Holy Spirit to direct his life. He inspires -- he makes me smile this morning with this interview and it encourages me to do better-- to be a " good guy " .
C Lewis
7 years 6 months ago
I have to wonder if Francis' TV diet accounts for his apparent lack of information regarding the accomplishments, status, dreams and human rights of women, at least those in the developed world? Our culture has changed considerably since 1990, and many of us would say for the better. Certainly there is almost an infinite amount of garbage on both broadcast and cable TV, but it's also an important way to stay in touch with today's reality -- which isn't always reflected in what we hear from Rome.