Review: In the crosshairs of the F.B.I. 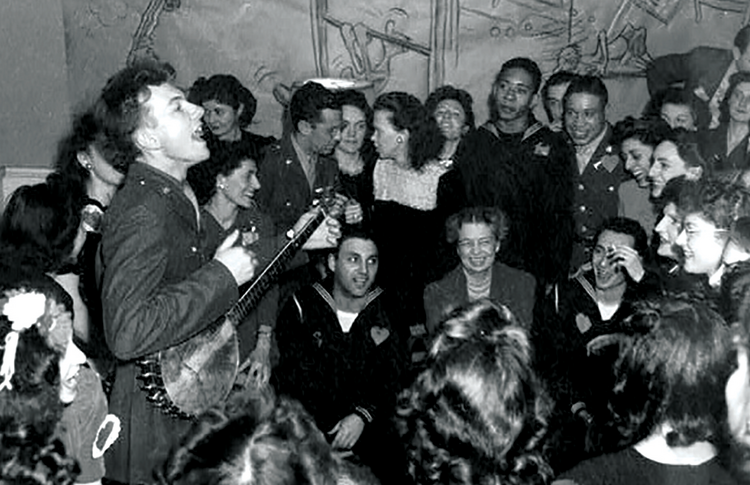 Folk singer Pete Seeger entertaining at the opening of the Washington labor canteen, sponsored by the Congress of Industrial Organizations (CIO), on Feb. 13, 1944. First lady Eleanor Roosevelt is seen at center. (Joseph A. Horne/ Library of Congress)

On Aug. 27, 1949, Paul Robeson, the All-American footballer, opera star and popular music performer of “Ol’ Man River” and other songs, was set to headline a benefit concert in Peekskill, about 30 miles north of New York City. Presented by People’s Artists, a union music organization co-founded by Pete Seeger, the concert was to benefit the Harlem chapter of the Civil Rights Congress for the defense of individuals accused under the 1940 Smith Act of being members of the Communist Party USA.

While no evidence of Robeson being a card-carrying member exists, he was nevertheless a committed supporter of the party. Robeson was vocal in his opposition to the Ku Klux Klan, Jim Crow laws and the colonization of Africa. Weeks before the concert, he had appeared at the World Peace Concert in Paris, where he said that “it was on the backs of white workers from Europe and on the backs of millions of Blacks that the wealth of America was built…we resolve to share it equally [and] reject any hysterical raving that urges us to make war on anyone.” Robeson was, as they say, political.

The Folk Singers and the Bureauby Aaron Leonard

An editorial about the concert in The Peekskill Evening News told readers that “like most folks who put America first, we’re a little doubtful of...finding the luster in the once illustrious name of Paul Robeson now almost hidden by political tarnish” and “the time for tolerant silence that signifies approval is running out.” That evening, before the concert, a parade organized by the Joint Veterans Council grew to a mob of 5,000 people that converged on the concert area, turned off the generator, broke and burned the stage, beat young Jewish and Black men, and vandalized cars. An eyewitness recounted being terrified as the mob rocked his car and shouted racist epitaphs. The Daily Worker reported K.K.K. involvement and a burning cross.

The stigma associated with folk singers and the Communist party, as Leonard details, appeared to fluctuate with the country’s relationship with the Soviet Union.

Aaron J. Leonard’s new book, The Folk Singers and the Bureau, draws from almost 10,000 pages of F.B.I. files on an array of folk artists. It aims to illustrate the considerable impact that the U.S. government’s campaign against Communism had on folk artists in the 1940s and early ’50s. Among the artist files Leonard digs into in addition to Robeson’s are those on Woody Guthrie, Pete Seeger, the archivist Alan Lomax, Lee Hays, Sis Cunningham, Millard Lampell, Josh White, Lead Belly, Aunt Molly Jackson, Bess Lomax Hawes, the Weavers, Burl Ives, Cisco Houston and more. All of them sat somewhere on the Communist Party spectrum, according to the F.B.I., whether they were legitimately card-carrying members or associated with it because they once attended a meeting or played a concert organized by the party.

The stigma associated with the singers and the party, as Leonard details, appeared to fluctuate with the country’s relationship with the Soviet Union. The government had only a passing interest in the artists that were associated with the party prior to 1939; but once Stalin and Hitler signed the Molotov–Ribbentrop non-aggression pact in 1939, surveillance increased. That changed less than two years later when the pact was broken and Germany invaded the Soviet Union. When the United States joined the war, artists like Seeger helped rally support.

Leonard describes in detail how months after Seeger and Guthrie stopped in Oklahoma City to visit Bob and Ina Woods, both members of the party in Oklahoma, and performed for a small group of striking oil workers, the party’s headquarters at the Progressive Bookstore was raided because the group was accused of breaking a law that prohibited the circulation, sale, distribution or display of printed matter advocating or teaching “syndicalism,” a term for taking over control of the economy. A few pages later, Leonard includes a photo of Seeger singing for Eleanor Roosevelt. Seeger, however, wouldn’t get off that easy, even though he joined the Army in 1943.

In 2015, the F.B.I. released almost 2,000 pages of material on the folk singer, including a report that cautioned that Seeger might be subject to “divided loyalties” given his Communist affiliations. Equally troubling, considering the U.S. policy of interning Japanese Americans at the time, was that Seeger’s wife, Toshi Ohta, was half Japanese. “This officer believes the Subject will be further influenced along questionable lines by his new wife...he protested what he considers to be the improper treatment of American-born Japanese.”

As Leonard reminds us, much of what happened to artists and U.S. citizens in general in the ’40s and ’50s, from imprisonments to fines and blacklists, “operated within the strictures of US democracy.”

Following the war, the Communist Party in the United States and the folk singers associated with it again faced suspicion, this time exacerbated by the Cold War. Leonard offers an anecdote to show what artists fighting for civil rights and anti-racism were up against in popular culture while under the surveillance of the F.B.I. In the 1948 presidential election, Henry Wallace, vice president under Roosevelt and commerce secretary under Henry Truman, ran as an independent against Truman himself, who was at the time still the incumbent. Wallace, while not a member of the Communist Party, was sympathetic to its causes and was willing to work with it. He also had supporters on the campaign trail in Robeson, a superstar at that time, and Seeger. The latter accompanied Wallace through the South, where the campaign refused to hold segregated meetings.

Wallace finished in fourth place in the election, with only 2.4 percent of the vote, coming in far behind not only Truman and Thomas E. Dewey, but also behind Strom Thurmond, the Southern segregationist, who kicked off his campaign by announcing that “there were not enough troops in the Army to force Southern people to admit Negroes into our theaters, swimming pools and homes.”

As Leonard goes on to report in detail, folk artists associated with Communism were not only battling the general populace, the F.B.I. and the House Un-American Activities Committee, which was increasingly calling them to testify, but even the Communist Party itself, which slowly began to implode as key individuals became informants and its membership ultimately dwindled.

As Leonard reminds us, much of what happened to artists and U.S. citizens in general in the ’40s and ’50s, from imprisonments to fines and blacklists, “operated within the strictures of US democracy.” Seeger was blacklisted and banned from performing on television until 1968. Robeson was denied a U.S. passport until 1958. Both have over time taken on elevated and iconic statuses in U.S. popular culture, their names ending up on institutions and awards and even postage stamps. But in their prime, Leonard writes, “they were treated as a first-order threat to the aims of the American century.” Imagine the trajectory of their careers and their artistic output had they not.

The Folk Singers and the Bureau reminds us that “such is the tenuous nature of artistic and political freedom in the United States.”

This article also appeared in print, under the headline “Review: In the crosshairs of the F.B.I.,” in the February 2021, issue.

Joe Pagetta is a museum professional, arts writer and essayist in Nashville, Tenn.