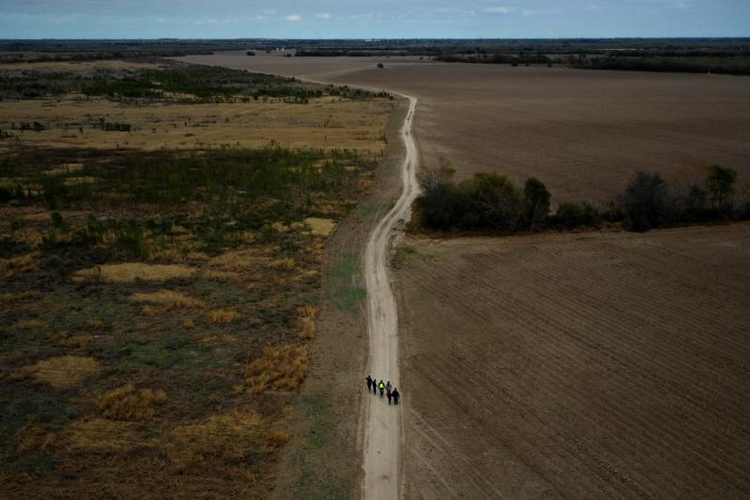 A group of migrants walk past plowed farmland near Penitas, Texas, Jan. 10, 2019. The U.S. Supreme Court ruled March 11 that President Trump's "Remain in Mexico" policy for asylum-seekers can continue while suits against protocols work their way through lower courts. (CNS photo/Adrees Latif, Reuters)

Marcelo Hernandez Castillo’s Children of the Land, a soulful and startling memoir of his life as an undocumented immigrant, begins with a knock on the door on a Sunday afternoon. When Castillo was a senior in high school, ICE agents raided his family’s home in California, searching for his father, who had been deported three years earlier.

Castillo, who had been brought across the border from Mexico at age 5, convinces the ICE agent to allow him to wake his napping mother so that she will not be startled by them barging through her bedroom door. “Sometimes I stuttered when talking to adults, but in such situations I was calm as if the panicked part of me had run,” Castillo writes.

This raid symbolizes the precarious nature of growing up undocumented. Any peace Castillo enjoys—like the calm of that Sunday afternoon—is tenuous. For the undocumented, the boundaries between public and private are porous. “For some reason,” Castillo writes, before the raid, “I thought our house existed beyond the limits of the border, as if it was a sovereign country of its own.”

While we might think of the southern border as fixed since the Gadsden Purchase of 1854, Castillo’s story illustrates how mutable it is. Members of Castillo’s family have migrated between Mexico and the U.S. for generations, coming north to work in the fields. At times restrictions on border crossings are lax or amnesty is granted. At other times the border hardens. As different political leaders take over, Castillo and his family are subject to the whims of changing laws.

He is able to obtain DACA status and eventually a green card, thanks to his marriage to his childhood sweetheart. But when his mother applies for a visa for victims of violence who have cooperated with police in an offender’s prosecution—for which she clearly qualifies—local officials deny it.

Castillo describes how his mother turned away from the Catholic Church because she could no longer believe in the vivid representations of the divine in its crucifixes, statues and stations of the cross. “She left the Catholic church because her prayers could no longer be to a saint incarnate—to the statue of that saint, its physicality…Some people want physical proof of God; they want to see him just like they see their neighbor, in order to believe. But not my mother. She wanted a God who, like her, could hide in plain sight.”

Review: Refugees and the rhetoric of love
Jeremy Zipple

Castillo is caught between two languages, two countries and two cultures. Our country’s unwillingness to claim these children who grew up here but were born in other countries they barely remember has turned them into ghost residents, here and not here at the same time.

At times Castillo’s experience is almost surreal, as when he attends an event in New York City to receive an award for his poetry while undergoing personal turmoil over the visa status of his mother. “People clustered in groups with drinks in their hands,” he writes, “laughing almost too hard at little things that might not have been funny anywhere else.”

Castillo writes with gorgeous precision and sensitivity about his experience as a boy growing into a man in a country that will not recognize him, his family split across borders. He vividly illustrates the psychological toll this takes on a sensitive soul who yearns for his family to be safe, intact and able to enjoy a Sunday’s peace.

This article also appeared in print, under the headline “The border divides a family,” in the April 13, 2020, issue.