Review: Refugees and the rhetoric of love 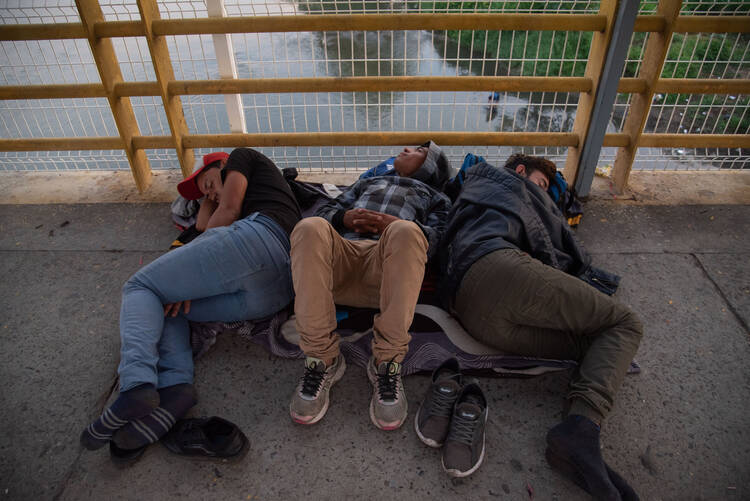 The sprawling Honduran city of San Pedro Sula entered the news during the 2018 midterm election campaign as the point of departure for the “migrant caravan.” In 2014, when San Pedro Sula had the highest homicide rate in the world, I went there to document Catholic efforts to curb the bloodshed. I recall visiting a Catholic youth center in one of the city’s most violent neighborhoods: The streets were eerily deserted (“People don’t want to get shot,” remarked our Honduran guide) and we avoided stopping at intersections (“We don’t want to get shot either”).

Every child at the youth center had a parent, a sibling, a friend—often several—who had been murdered. (Eighty percent of cocaine consumed in the United States is trafficked through Honduras, a principal cause of the relentless killing.) If only we could bus down Christians in the United States who fear Central American immigration, I thought, and let them witness the hurts and dreams of these kids, hearts would be transformed.

Blessed Are the Refugees offers the next best thing: not via a physical journey but through a spiritual and artistic one. Through prose, paintings and prayer, the reader is introduced to a half dozen or so young Latino immigrants who have found their way to Esperanza Center, a Catholic Charities-run immigration resource center in Baltimore.

Scott Rose, a pro bono attorney at Esperanza who co-edited the book, observes that when “we make decisions out of fear, not love, our responses are more limited.” This book confronts the rhetoric of fear, all too prevalent in recent immigration debates, with the rhetoric of the Gospel: the rhetoric of love. The authors invite us to see immigrants through the frame of the Beatitudes, to recognize that these young people are deserving of our care and protection.

If only we could bus down Christians in the United States who fear Central American immigration, I thought, and let them witness the hurts and dreams of these kids, hearts would be transformed.

Leo J. O’Donovan, S.J., Director of Mission for Jesuit Refugee Service/USA (and my former Jesuit housemate), offers poignant prayers on each of the Beatitudes interspersed between the migrant stories, and two young Salvadoran artists render stirring images of the migrant journey. In one, “Blessed are the Meek,” a solitary boy huddles in the corner of the frame, clinging to his teddy bear, as an inhospitable desert seems to engulf him. This is art that could only be created by those who know firsthand the tears of the migrant journey.

But through their stories, we too are allowed to cry and hope with these blessed ones. You will want to keep this book on the nightstand and meditate through it over a few weeks or a month. By the end, you may just discover your own heart transformed.

This article also appeared in print, under the headline “The rhetoric of love,” in the February 18, 2019, issue.

Jeremy Zipple, S.J., is associate pastor of St. Martin de Porres Catholic Church in Belize City and a documentary filmmaker. He is a former executive editor of at America Media.