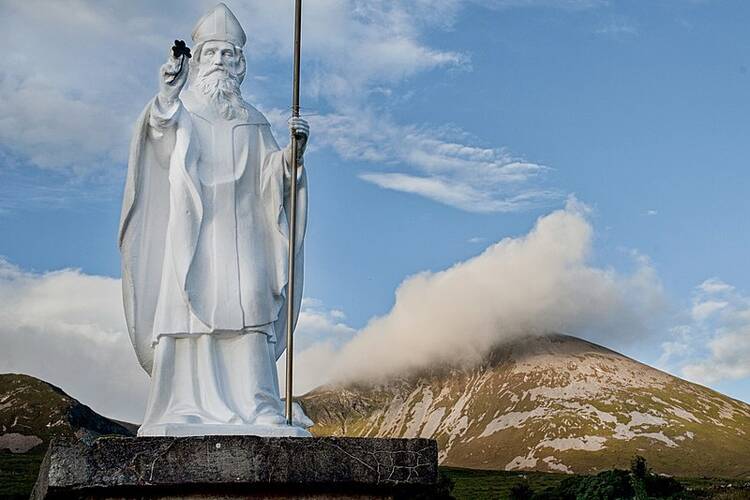 Statue of St. Patrick at the base of Croagh Patrick, Co. Mayo, Ireland (Wikimedia/Tom Szustek)

Saint Patrick seems like one of those religious figures people never tire of interpreting. Every new book or study just increases curiosity about him. While there are few historical facts, mysteries and legends abound. In Saint Patrick Retold: The Legend and History of Ireland’s Patron Saint, Roy Flechner—a lecturer at University College Dublin—sets out to understand St. Patrick through those very facts, mysteries and legends, and does so by shifting through what is known about the places, the peoples and the culture of the saint in his time.

Flechner’s task is a daunting one. A specialist in early medieval history, he sets out to write so that the general reader as well as the expert can understand who St. Patrick was and is. Overall he succeeds, though the flow of the narrative slows somewhat at times, due to the technical aspects on which he extrapolates. Actually, the drawback is really a blessing, because it forces the reader to retrace what it is that is being discussed and consider what the implications are, not only for the historical record, but for what St. Patrick means for one’s religious worldview.

The world in which St. Patrick lived was troubled, harsh and dangerous. But of that world came a flowering of faith such as the world has ever seen.

Right from the start, we learn what we already know, but at the same time, we find it jarring in print: St. Patrick was never formally canonized. St. Patrick’s sainthood has always been a “given,” though there has always been controversy as to whether he was either confused with another Irish missionary, Palladius, or whether he is actually a combination of two people who became known as “Patrick.” There are also debates about whether he was actually of English, Welsh or Scottish ancestry. His place of origin is still a matter of speculation. From available evidence, Flechner goes on to carefully dissect the threads woven into the life of St. Patrick, using the two historical documents St. Patrick ostensibly left to posterity, The Confession of Saint Patrick and The Letter to the Soldiers of Coroticus.

The world in which St. Patrick lived was troubled, harsh and dangerous. But of that world came a flowering of faith such as the world has ever seen. Though that faith may seem to be waning now, perhaps the story of St. Patrick needs to be “retold” again, as is done so admirably in this book. St. Patrick was more than green shamrocks and venomous snakes and the legends of antiquity. St. Patrick was a figure of faith and devotion.