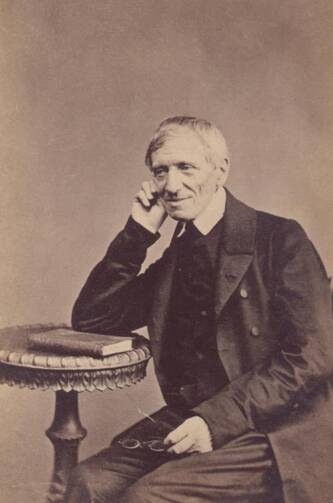 Blessed John Henry Newman is pictured in an 1865 photo. (CNS photo/courtesy Fathers of the Birmingham Oratory)

By the time John Henry Newman entered into the Catholic Church in 1845, he had grown disillusioned with his former Anglican faith.

In 1839, after reading about the heresy of monophysitism, Newman spoke of “doubts about the tenableness of Anglican tenets.” In 1841, his sermon declaring the Catholic character of the Church of England caught the ire of the Bishop of Oxford, who demanded Newman’s silence.

And on Sept. 25, 1843, after concluding his final sermon as an Anglican priest, Newman symbolically removed his stole, eliciting public lament. As the clever typesetting on the cover of the Rev. Michael Collins’s excellent new biography suggests, John Henry Newman, who is to be canonized by Pope Francis on Oct. 13, truly became a new man—and not just once.

Long before his conversion to Catholicism, Newman had committed himself to celibacy and a life of faith following a formative religious experience at age 15. Father Collins depicts this experience as “a conversion that made him more aware of the presence and majesty of God.”

This brief biography of Newman and his often complicated times succeeds in portraying Newman as more than a formidable, occasionally irritable prelate or an eminent Catholic theologian, although both descriptions are apt. Instead, he portrays Newman as a human being, the kind that loves, grieves, struggles and at various times, triumphs.

At his death on Aug. 11, 1890, Newman left behind nearly 20,000 letters, numerous books and two autobiographies—not surprising for someone who read a library’s worth of books. What emerges from his writings, and through Father Collins’s recent work, is a man dedicated to his friends and his beliefs; a man unafraid of conflict at first hesitant to accept the august title of cardinal.

Newman was abandoned by his siblings following his conversion to Catholicism. His sister, Harriet, never communicated with him again. Father Collins explains that Harriet saw Newman’s conversion as “an act of betrayal” and feared that Newman “would infect her husband with the ‘Roman superstition.’”

Newman publicly clashed with various church leaders throughout his life, including some Irish Catholic bishops who proved antagonistic toward Newman’s establishment of a Catholic university in Ireland in 1854. He found his life in Dublin a period of demoralizing setbacks and personal strain, and labeled his life “dreary.” He endured the insults of the Cambridge University professor Charles Kingsley and sparred in writing with Prime Minister William Gladstone of England.

But Father Collins also pays special attention to Newman’s rich, “intense” friendships, particularly with the Oratorian Ambrose St. John. Upon the death of Father St. John in 1878, Newman suffered tremendous grief. “I have ever thought that no bereavement was equal to that of a husband’s or wife’s, but I feel it difficult to believe that any can be greater, or anyone’s sorrow greater than mine,” wrote Newman about his friend’s death. According to his final wish, Newman was buried in the same grave as St. John and remained there undisturbed until Newman’s exhumation in 2008.

Newman is chiefly remembered today for his rejection of moral relativism and his theological contributions, especially his 1845 work, An Essay on the Development of Christian Doctrine. In this work, Newman contends, as Father Collins puts it, “that doctrine developed organically from the Bible.” This essay garnered respect from some in Rome and from certain theologians, including Giovanni Perrone, a Jesuit professor at the Gregorian University.

In all, Father Collins understands Newman not as “a stainless saint,” but as a dutiful friend and a multifaceted defender of the Catholic faith.

Correction, Oct.11: This review originally referred to the Jesuit college in Rome by its original title, the Roman College. It is now the Pontifical Gregorian University.

This article also appeared in print, under the headline “A new saint, an ancient faith,” in the December 23, 2019, issue.