One man, two churches: John Henry Newman’s legacy lives on for both Catholics and Anglicans 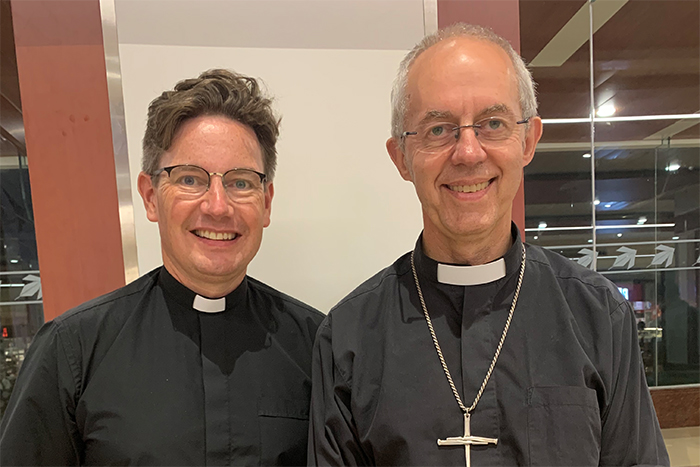 The Rev. Dr. Will Adam is the Archbishop of Canterbury’s Ecumenical Adviser and Director of Unity, Faith and Order for the Anglican Communion. Dr. Adam was ordained in 1994 and served in several parishes, most recently in London, before joining the senior staff at Lambeth Palace in early 2017. A graduate of the Bossey Ecumenical Institute, he oversees the Anglican Communion’s relations with the Catholic Church and other Christian communions.

In preparation for Pope Francis’ Oct. 13 canonization of Blessed John Henry Newman in Rome, Archbishop of Canterbury Justin Welby has announced sending a delegation to represent the Church of England, Newman’s former faith community. On Oct. 9, I interviewed Dr. Adam, a member of the delegation, by email about Newman’s legacy in the Anglican tradition and for ecumenical relations.

What is the significance of the Anglican Communion including John Henry Newman on its liturgical calendar?

John Henry Newman has been commemorated in the liturgical calendar of the Church of England for a number of years. There is no central sanctorale for the entire Anglican Communion, but he is also commemorated in the calendars of other provinces, among them the U.S., Canada and Australia. The Churches of the Anglican Communion do not have a tradition of canonization as it is understood in the Catholic Church, but they do have liturgical calendars that mark and honor the lives and legacy of holy men and women, including many from the period after the Reformation.

As someone who was an important figure in the development of the life of the Church of England in the 19th century, as well as a figure of prayer, holiness and dedication to Christ, Newman is an example of godly life. As is most common with commemorations of holy men and women the date of his commemoration in the Church of England calendar is Aug. 11, the date of his death.

A figure of prayer, holiness and dedication to Christ, Newman is an example of godly life.

Newman, a brilliant scholar who founded the Anglo-Catholic movement at Oxford, moved the Church of England away from Protestantism toward a “middle way” between Protestantism and Roman Catholicism. How do you assess his legacy in the Anglican Communion today?

Newman was one of a number of influential scholars in Oxford in the 1830s and 1840s who began to be interested in the relationship between Anglicanism (as it was later to be known) and the wider church, East and West. They were very interested in the early church and the study of the Church Fathers and published their opinions in a series of ninety pamphlets or “‘tracts’”. The group became known as the ‘“Tractarians.”’ The work of Newman, Pusey and others informed Anglican thinking from that time on. It wasn’t until later that liturgical development led to the reintroduction of Catholic liturgical practice into Anglican worship, but it was Newman and his colleagues who laid the groundwork for liturgical as well as theological developments.

Although Newman later became a Catholic priest and cardinal, he spent an equal amount of his life as an Anglican, taking Anglican orders and being formed in the Oxford intellectual tradition. In what ways does his background make him an ideal bridge figure for Anglicans and Catholics today?

It is important to remember that there are not two Newmans—one Anglican and one Catholic— but one. He took his 15 years as Vicar of St. Mary’s Church Oxford, as well as his experience of prayer and study as an Anglican, with him when he joined the Catholic Church. In a recent article, Bishop Fintan Monahan, the Catholic Bishop of Killaloe, in Ireland, has suggested that in the present day Newman would have been a keen proponent of the ecumenical dialogue in which Anglicans and Catholics have been involved for over 50 years.

It will always be the case that some people find their spiritual home in a church that is not the one in which they were baptized. I do not think this is just to do with being “progressive” or “conservative”: there may be many other factors: be they theological, spiritual, liturgical or to do with the family life of the person concerned. In my own pastoral ministry over the last quarter of a century I have prepared a number of former Catholics for reception into the communion of the Church of England and have bid farewell, with prayers and good wishes, to Anglicans who have become Catholics.

It is important to remember that there are not two Newmans—one Anglican and one Catholic— but one.

This past January 26, responding to the Roman Catholic ordinariates erected to receive converts from Anglicanism in a way that maintains their liturgical tradition, Archbishop Welby told the Spectator that it is “wonderful” when Anglican clergy defect to Rome to be “faithful disciples.” How do you see Anglicans becoming Roman Catholic as a positive thing for ecumenism?

The goal of both churches is Christian unity. St. John Paul II famously wrote in “Ut Unum Sint” that our being unreconciled hinders our proclamation of the Gospel of reconciliation. I pray, and work, for the day when our churches will be reunited.

How have the Anglican See of Canterbury and the Roman Catholic See of Westminster collaborated in celebrating this joint canonization of Newman?

We were pleased to receive an invitation to send representatives to Rome for the canonization on October 13. Several bishops, clergy and lay people from the Church of England will be there for this important event. The Archbishop of Canterbury will preach at a service of Vespers at Westminster Cathedral on Saturday October 19 following the canonization.

Newman lived at a time of mutual suspicion between our churches, but the mutual respect and warmth between the Holy Father and the Archbishop of Canterbury is indicative of a much changed landscape since Newman’s day.

If you could say one thing to Pope Francis about St. John Henry Newman, what would it be?

That Newman spent half of his life as an Anglican and half as a Catholic. There is only one Newman, not two, and his legacy is common to both churches. Newman lived at a time of mutual suspicion between our churches, but the mutual respect and warmth between the Holy Father and the Archbishop of Canterbury is indicative of a much changed landscape since Newman’s day.

The Anglican-Roman Catholic International Commission (ARCIC) is now in its third phase of work, bringing together theologians to work together towards a greater unity. To this has now been added another, more practical, initiative, the International Anglican-Roman Catholic Commission on Unity and Mission (IARCCUM). Under IARCCUM, pairs of bishops, Anglican and Catholic, in different parts of the world seek to make the theological convergence achieved by ARCIC a reality and to find ways of sharing in mission and ministry in their local situations. In England there is a great deal of collaboration and cooperation in proclaiming the Gospel to the world and in working together to care for those in need. It is true that in questions of ordination and ministry there is disagreement amongst us, but from the pope and the archbishop of Canterbury to local churches and their clergy and laity there is a commitment around the world to Anglicans and Catholics working together in God’s service.

What are your hopes for the future of Catholic-Anglican relations?

I remain hopeful for progress in our theological dialogue. It is certainly the case that, as two bodies of Christians there is much more that unites us than divides us. The world is crying out for the Good News of Christ and for people to care for those in need in Christ’s name. That is something that Anglicans and Catholics (and other Christians too) can and do do together.

Earlier this year Pope Francis and Archbishop Welby, together with a former Moderator of the (Presbyterian) Church of Scotland, were present at a spiritual retreat in Rome for the political leaders of South Sudan as part of efforts to broker a lasting peace there. This joint witness, prayer and teaching can have a real and lasting positive effect in our world.

Personally, I believe there can be only one answer to that question: To come together and to work side by side in works of charity, which tends to make disagreements on dogmatic issues like Holy Orders simply distractions. To love God and love neighbor trumps doctrine. Find a big global issue which needs attention, like climate change, and create interfaith dialog and action to come together with shared resources to work hand and hand to address eco justice initiatives. This can easily be done in the US - diocese by diocese, church by church. Imagine what that might look like versus the way we approach climate change today!

Another excellent interview, Fr. Salai. And a profound point about there being one Newman - both Anglican and Catholic - not two. He was a wise man, and I think another wisdom tradition - Buddhism - would see this as evidence of Christian non-dualism.

Thank for your ongoing dialogues and interviews. I really enjoy them and learn from them.

Thanks everyone for reading. Although he reputed Anglicanism and combated liberalism (a heresy he defined as "the anti-dogmatic principle") in his lifetime, Newman does seem to have become an unexpected bridge figure for Catholics and Anglicans as well as conservative and liberal Christians. It will be interesting to read the appreciations from various quarters during his canonization this weekend.