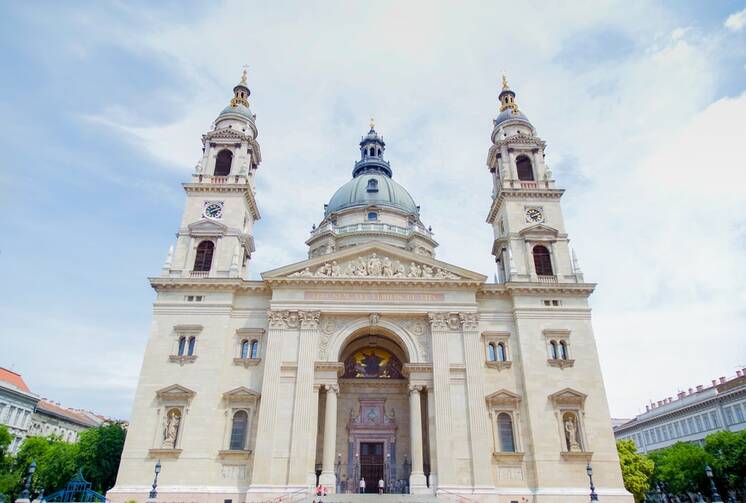 The Catholic Book Club selects four books a year to read and discuss. Our most recent selection has been Catholic Modern, by James Chappel. Readers can find Father Spinale's previous essays on this book here and here.

Often when reading a complex text, I pay attention to words that are somewhat peculiar and rich in meaning. These words can connote metaphors that authors intend to imply along with their more explicit ideas. In the second half of Catholic Modern, I noticed the word “enshrine” in several crucial paragraphs.

It is an interesting word because it carries religious significance, and it marks a change—something (some object or concept or phenomenon) that had not before been revered is now separated from the everyday and seen as holy. Such a metaphor, I think, marks a crucial principle underlying the more explicit ideas for which James Chappel argues. The Catholic Church—amid the upheaval of the 20’s and 30’s, the war and massacre of the 40’s, the staid conservatism and compromise of the 50’s, and the upheaval of the 60’s—changed in many important ways. But the principal enshrinement—led by lay Catholic politicians, economists and thinkers in Europe—was that of the family as the unit of political, economic and theological focus for postwar Europe.

Christian Democratic Modernism was something new: a set of Catholic strategies that drew on the long tradition of the Church but mobilized them in new ways to respond to new challenges. Catholics in the 1950’s faced two problems in particular. First, some kind of consensus had to be reached that could bring together long-divided Catholic communities [paternal and fraternal Catholic moderns, the main division in Chappel’s eyes]. Christian Democrats relied on the elaboration of a baseline “Christian approach to sociopolitical affairs that could appeal to many constituencies...Second, Catholics needed some way to understand and legitimate the most transformative element of the long 1950s: explosive economic growth and the birth of a consumer society. Catholics had long been suspicious of mass consumption and the market, a position that was no longer tenable on a continent weary of ascetic ideology and intoxicated by the new influx of consumer goods (184).

Catholics in the long 1950s interpreted the private sphere as a space for consuming families: nuclear families, with stay-at-home mothers, tasked less with heroic childbearing than with consumption, love, and happiness...This understanding of the private sphere, as in other forms of Catholic modernism, authorized a novel set of claims on the public sphere. The state and the economy were now tasked, above all, with enshrining [my emphasis] the rights and needs of the consuming family...It [the consuming family] was the entity in whose name the economy and state should properly be organized (instead of, for instance, the individual citizen, the working class, the race, or the nation) (185-186).

Perhaps most interesting in Chappel’s presentation of European Catholic history is the nimbleness with which the Catholic Church adapted to its political-social-economic-cultural context.

And then, the further, summative claim:

Christian Democratic modernism enshrined [my emphasis] the sexually satisfied and heteronormative family as the agent of welfare and ethics—a novel understanding of the private sphere that led to new forms of welfare policy, a renewed attempt to legislate family morality, and new forms of dogmatic moral teaching (200).

A great deal follows from Chappel’s points above, but perhaps most interesting in Chappel’s presentation of European Catholic history is the nimbleness with which the Church adapted to its political-social-economic-cultural context:

Much of this book has been consumed with telling the story of these two strategies [paternal and fraternal Catholic modernism]—how they were birthed, how they fused in the anomalous era of the Christian Democratic 1950s, and how they were torn apart again in the shadow of the sexual revolution. This should not distract us from what is, in some sense, the largest and most surprising finding. It was not a given that the Catholic Church would be able to make the transition to modernity with success. Indeed, from the vantage point of 1900, it seemed to many that it would not, which is one reason why Catholic leaders were reluctant to do so for so long. It is certainly possible to imagine a world in which the Church slowly dwindled in significance, unable or unwilling to grapple with the new problems posed by the twentieth century. That is not, however, the world we live in (257).

A modern Catholic could add, “That is not the Church we live in either—deeply flawed but resilient through the presence of the Holy Spirit.”

Perhaps, to conclude, I can offer two points for discussion on specific individuals that Chappel introduces along with one final larger point on the significance of the strands of paternal and fraternal Catholic modernisms.

His essential point was that the rapidly accelerating economic unification of the globe had to be matched with its political unification. Otherwise the baser instincts mobilized by economic processes could not be tamed by the nobler and more rational impulses offered by the political. This mismatch between economic globalization and political balkanization, Maritain thought, was bound to lead to disaster, and it corresponded to an unjust, irrational notion of political society (171).

Is this not what is happening in Europe now? Are political alliances not hemorrhaging as economic concerns have become the most determinative aspect of politics? Are human rights not currently being ignored in order to protect further economic growth? Is Maritain frighteningly prescient?

A church remade in the midst of modernity
Kevin Spinale