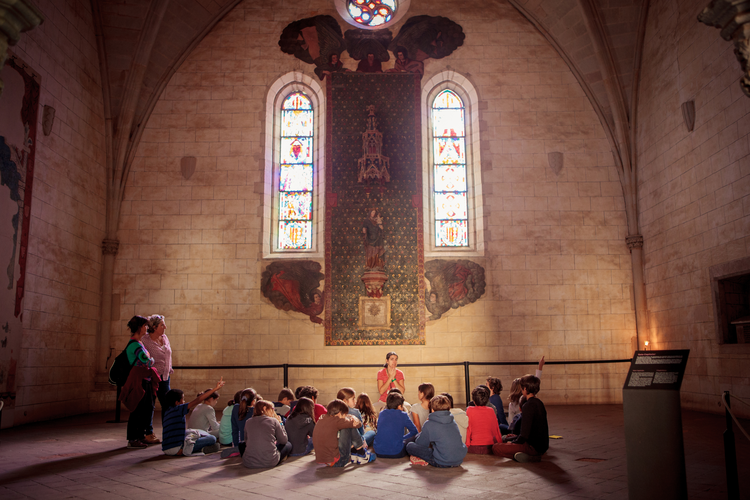 While I was reading on the subway in New York a couple of weeks ago, a passenger seated to my left asked, “Hey, why are you writing on that book?” I responded, “So I can remember my encounter with the text.” It was an absurd response, especially in that it included the word “encounter,” but it was true. I write in every book that I own and read. I want to remember what I was thinking and asking as I read through a text.

My copy of James Chappel’s Catholic Modern is filled with markings, notes and questions in a variety of colors. I am learning a great deal, and I am keeping a record of my learning in the text. But rarely have I written some version of “these are fantastically important claims” a number of times in the margins over the course of a few pages. Here is an example of what I found fantastically important:

The mainstream Catholic modernism of the 1930s defined the private sphere—the space of religion—in terms of reproductive families: a unit that included a working father and a stay-at-home mother, married in the Church and bound by Catholic law to regulate sexuality and divorce, duty bound to procreate for their Church and their fatherland alike. Catholics were still interested in having their own institutions wherever possible, most notably schools and clergy-led Catholic Action organizations. But in the last instance, they tended to see the nuclear family as the last redoubt of social virtue, and the institution to be protected above all else. As one German women’s magazine puts it in 1935, “When the whole world is in crisis” and “when all spheres of life become secularized,” we Catholics have no choice but to “push for the strengthening, healing, sanctification, and consecration of family life.” Never before had the secularization of non-family spheres been accepted [my emphasis]. And never before in Catholic history had so much emphasis been placed on the multigenerational family unit as the centerpiece of social order. [Page 64]

I particularly like the word “redoubt” rather than “bastion.” It connotes a smaller physical space, a reduction. Aside from being well-written, the passage contains major claims that have far-reaching consequences well beyond Germany, Austria and France in the 1930s and early ’40s. However, and I think this also to be fantastically important in reading Catholic Modern, we have to allow these claims to remain in their context and allow Chappel to present his portraits of lay Catholic intellectuals and politicians to see if these claims are in fact the case. The triptych portrait of Chapter 2 includes Mina Wolfring, Theodore Brauer and Henri Massis. As readers, I think we should allow for the arguments to hit us, see if they are borne out and then begin to make comparisons between Europe of 1929-1944 and today.

My copy of James Chappel’s Catholic Modern is filled with markings, notes and questions in a variety of colors. I am learning a great deal, and I am keeping a record of my learning in the text.

In the midst of his account, Chappel acknowledges the sheer intellectual energy and toil that scholars have expended to gauge the complicity and culpability of the Roman Catholic Church in its alliances—and this word alliance appears over 12 times in these two chapters—with fascist governments during these years. Yet, his project is meant to analyze ideas about “Catholic modernity” and how the Catholic Church became modern. He addresses anti-Semitism again and again—he has to—but as a function of his analysis of Catholic anti-modernism. Chappel’s focus is the two initial modern modes that come into being in the 1930s: paternal and fraternal.

Chappel concludes Chapter 2 with two haunting sentences meant to mark that which he will not take up directly: “This [Pius XII’s Christmas messages from 1942 through 1944 and their omission of the plight of European Jews during the war] was most apparent in one very loud silence: while ‘the innumerable sorrowing host of mothers’ received special attention, neither message spared a word for the specific suffering of Europe’s Jews. Catholics may have learned to be modern, but modernity can be cruel” [Page 107].

Here is another of the passages that I labeled a “fantastically important claim”:

Only in this era did it become obvious that Catholic law should apply in questions of sexuality, marriage, and reproduction but not directly in questions of commerce or politics. Catholics called on the state to ban contraception, while presuming that Catholic doctrines of usury, private property, or trade union liberty were open to negotiation. Catholics called on the state to ban divorce, too, while abandoning the traditional insistence that the state publicly commit itself to Christ. They therefore followed a path familiar to many different religious traditions in the nineteenth and twentieth centuries. In order to make a home in a modern society, they consolidated religious law around the putatively private spaces of the body and the home, thereby permitting the economy and the state to swing free of the direct jurisdiction of religious law. [Page 66]

Again, a huge claim with an interesting note in the last sentence: Paternal Catholic moderns “permitted” or gave free rein to the state over other important and traditional Catholic concerns, like structuring the economy and mediating between labor and employers.

Chapter 3 introduces a new trio—Jacques Maritain, Ernst Karl Winter and Dietrich von Hildebrand—a fascinating group even if it were reduced only to Hildebrand, of whom Chappel quips, “Hildebrand’s story might be unique in European history: attacked for his Catholicism and saved by his Jewishness” (Page 122). These three were heavyweight intellectuals who were able to distinguish between the immediate threat of communism and the real concerns of workers and worker syndicates that tried to remain independent of national socialism or fascist corporatism. All three decried both fascism and the bare natalism that sometimes legitimated it. They did not compromise with fascist governments, nor did they emphasize ideas congruent with the fascist conception of the state.

focused on marriage as a partnership of equals, structured by desire and sacrament alike. The horizontal and dialogical relationship of marriage, not the hierarchical one of the family, provided the model for civil society made up of a teeming multiplicity of associations: Catholic, Protestant, Jewish, and secular. In short, they viewed the private sphere—the space of religion in modern politics—to be made up of civic associations, governed by solidarity. [Page 112]

In concluding Chapter 3, Chappel ends on a decidedly different note than Chapter 2, one that suggests his affinity for this fraternally oriented group of Catholic moderns:

Catholic antifascism was genuinely Catholic, rooted in the antistatist and pluralist traditions of social Catholic thinking, updated in a modern and interfaith key to confront modern and interfaith problems. Then and since, some have argued that the Church’s compromises with fascism and anti-Semitism reveal the secret truth of a hierarchical, obtuse, and outdated institution. Maritain and the Catholic antifascists remind us that another story is possible. They agreed with the great English Catholic writer G.K. Chesterton, who judged that “Christianity has not been tried and found wanting. It has been found difficult and left untried.” [Page 143]

Let’s try to keep reading and discussing these ideas, which I think are fantastically important to the history of our church.

Why did the church in Ireland—under no threat of communism (as far as I am aware) or secularism—so adhere to the politics of the family during the same years as Austria, France and Germany?

A church remade in the midst of modernity
Kevin Spinale

Some questions for discussion:

As I said in the author's other recent column. Avoid Catholic intellectuals (have a soft spot for Chesterton) and seek out Bernadette, Teresa, de La Salle and Antonio Gaudi as guides. None of these intellectuals are advocating for freedom.

Aside: communism and fascism are two left wing ideologies fighting like rabid dogs over the same bone. Between them they killed or led to the death of 140 million in the 20th century. Isn't socialism wonderful!

The author might want to address what caused the modern world. It arose in two small places, Holland and England because of disputes over religion that led to religious freedom, eventually to overall freedom for most. It spread to the English colonies especially Pennsylvania where William Penn created the poor man's country. Pennsylvania absorbed 80.000 poor German immigrants who became prosperous because of freedom. It then gradually spread to the rest of Western Europe and in the last 70 years to much of the world.

Review: Paul Mariani’s life in verse
Paul Mariani’s poems ask, “Does God know us only by the names our parents gave us?,” another reminder of how the human and eternal meet.
Philip C. KolinMay 15, 2020

Review: How (and why) to reinvent journalism as we know it
Victor Pickard wants to help “reinvent journalism” by working out a new economic model based on some sort of public subsidy for reporting outlets all over the country.
John W. MillerMay 15, 2020

Review: Jia Tolentino on the realities of life
In a collection of nine essays, Jia Tolentino writes about a range of topics, including the advent of our internet culture, the modern wedding industry, megachurch evangelical Christianity, market-driven feminism and college rape culture.
Angelo Jesus CantaMay 15, 2020

Review: The Christ-like (and paradoxical) life of Dorothy Day
Dorothy Day lived a life that today poses significant challenges for just about anyone mindful of the least of our brethren.
Mike MastromatteoMay 13, 2020