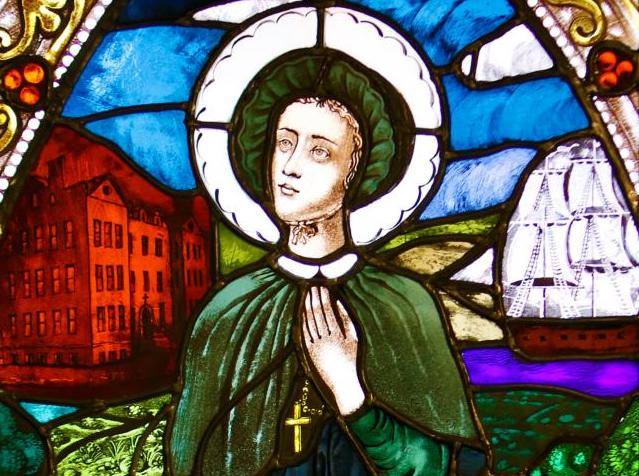 It was March 14, 1805, in New York City. A 31-year-old woman who all her life had discussed religion with educators, spiritual advisers and even her own family is about to proclaim her commitment to the teachings of the Roman Catholic Church. Her name is Elizabeth Ann Seton.

Pope Paul VI would canonize Seton 170 years later, on Sept. 14, 1975, making her the first native-born citizen of the United States to be named a saint.

Readers learn early in Catherine O’Donnell’s Elizabeth Seton: American Saint that Seton’s mother was the daughter of an Episcopalian priest, and her father (who later walked out on his wife) was chief health officer of the Port of New York. She herself served those shattered by poverty, side effects of the American Revolution, and felt the pain as both strangers and those she loved were destroyed by yellow fever and tuberculosis.

Elizabeth was intellectual, read devotional literature, kept a diary and wrote letters to all her friends and family spread around the world. On Jan. 25, 1794, at the age of 19, Elizabeth married William Magee Seton, 25, a wealthy businessman whose career often took him to Europe. William brought his six younger siblings into the family, while Elizabeth quickly gave birth to five children of their own: Anna Maria Seton, who eventually took vows as a member of the Sisters of Charity; William Seton II, a naval officer who with his wife Emily had eight children, one of whom became a monsignor and another a Sister of Mercy; Richard Bayley Seton, a civilian clerk on a naval ship; Catherine Charlton Seton, who entered the Sisters of Mercy; and Rebecca, who died young.

During these years, as the families multiplied, Elizabeth’s desire to convert to Catholicism took various forms, especially in her distinction between life and death. She tended to see death more as moving into the presence of God than as a confrontation of one’s sins throughout life. Thus, death should not be seen as a moment of judgment about the future agony of someone who might have lived a decent but imperfect life.

Elizabeth Seton was intellectual, read devotional literature, kept a diary and wrote letters to all her friends and family spread around the world.

The men in Elizabeth’s family were at best indifferent toward religion, but Elizabeth read widely. Tempted by depression, to settle her nerves she turned to literary classics, like Voltaire’s Candide, with its Pangloss playing with the idea of providence. O’Donnell quotes a letter Seton wrote to her father: “I have passed one of the most Elegant Evenings of my life…. Part of my family are asleep and part abroad—I have been reading of the ‘High and lofty one who inhabits Eternity.’”

In 1799, William’s mental and physical health began to suffer. And if William failed to survive, Elizabeth wrote to her friend Rebecca, she and Rebecca might never see one another again, since she would be so shattered by the loss. She added, “I’m pregnant for the fourth time.” O’Donnell sees Elizabeth working to “reduce herself to a vessel of God’s love. That quest, as ambitious as it was self-denying, underlay her conversion to Catholicism and all that followed.”

Meanwhile, it seems that the closer Elizabeth came to declaring herself a Roman Catholic, the more obstacles stood in her way. Her father, Richard Bayley, was “impermeable to evangelization,” so she did not even try to discuss her interest in Catholicism. Her husband, who was in many ways the center of her life, showed only a polite interest in evangelization, while also saddled with a plummeting business and his failing body.

O’Donnell sums up the atmosphere of those years:

Elizabeth Seton’s contemplation of death was not unique to her; mortality was the soil from which theologies and philosophies had always grown, and in the eighteenth century death remained as common as dirt. Women sickened and died in childbirth; men slumped home from work at the docks yellowing with a fatal fever; hearts failed, cancers grew, horses threw their riders and wounds suppurated. The possibility of death lay everywhere, whether one longed for it or feared it, so why not put it to use? Such was already Elizabeth’s view when, in the summer after William’s bankruptcy, she and her children made their country home at the city’s new quarantine station.

One response to the plague that swept New York City was to move for a while to Europe, where some hoped the cleaner atmosphere would allow for better health. So in mid-November the ship Shepherdess pulled into the harbor of Livorno, Italy, carrying William and Elizabeth Seton with their young daughter Anna Maria, who had absorbed her mother’s piety with enthusiasm. They were greeted by William’s friend and business partner Filippo Filicchi and his wife, Mary. Before they could connect, a voice yelled, “Don’t touch!” The rumor had reached Livorno of a new plague of yellow fever in New York.

An American Daughter: Elizabeth Ann Seton and the birth of the U.S. church
Regina Bechtle

The Setons, treated like immigrants, were rowed to a lazaretto (named for the friend Jesus brought back to life) and held for almost a month. William got worse and coughed up blood. He did not share Elizabeth’s impatience with life, but loved art, music and good dinners. Elizabeth spent the nights listening to her husband breathe and kissing his face to see if it was cold. Their daughter slept a few feet away. Anna Maria, 8 years old, felt sick. Elizabeth taught her to see the sickness as a gift from God. In his last days William imagined that he had won a London lottery and was no longer bankrupt. Four days after Christmas, his breathless, dehydrated body failed. At quarter past seven his soul “took its flight.”

It would be four months before the Setons could get a ship back to the United States, but with the hospitality of the Filicchis they toured Florence. Elizabeth, guided by Filippo, spent much of her prayer time debating if and when she should embrace Catholicism. Filippo had grand dreams of spreading Catholicism in the United States. He even wrote personally to Bishop John Carroll, suggesting that Providence had sent Elizabeth to Europe so she could re-encounter the divine message, for she was being called to spread the faith.

A year after Elizabeth Seton’s formal reception into the church in 1805, she assumed a new persona: that of a religious leader.

A year after Elizabeth’s formal reception into the church in 1805, she assumed a new persona: that of a religious leader. She was about to move to Canada when she encountered Louis William Valentine Dubourg, a French Sulpician priest who had been president of Georgetown College and St. Mary’s Seminary and College in Baltimore. He asked her to run St. Mary’s. Maintaining a school demanded fundraising ability, which usually entailed calling on a select number of wealthy families. As O’Donnell notes, the basis of the wealth for those families and the Catholic Church in Maryland was slavery. Those who owned slaves to support their church argued they had no choice but to accept slavery in order to do good.

Within a few years, through the combined efforts of John Carroll, the Sulpicians, benefactors, individual priests and religious women, with Mother Elizabeth Seton as both their guide and servant, Emmitsburg became home to a variety of institutions, including St. Joseph’s House and St. Mary’s Seminary and College.

Eventually tuberculosis took Elizabeth, just as it had her husband. Elizabeth was surrounded by loving friends and family when she died on Jan. 4, 1821. Her sister remembered, “It seemed the Lord was there.”

This article also appeared in print, under the headline “American Saint,” in the Fall Literary Review 2018, issue.