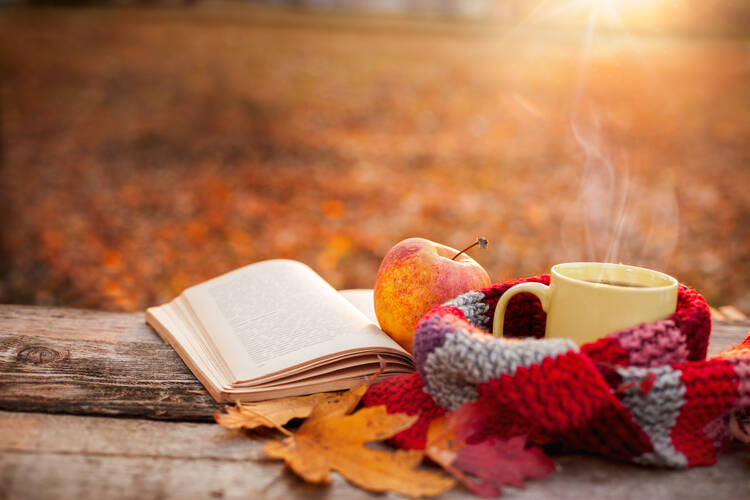 A little over a year since the creation of our online discussion group, the Catholic Book Club community on Facebook is rapidly approaching 2,000 members. We have found that even in a digital age, a large and vibrant audience still exists for quality print literature and intellectual conversation. We also discovered that our America readers are fairly omnivorous in their tastes: Our first two books were a memoir and a novel, and our two most recent selections were an academic text and a biography.

Everything Happens for a Reasonby Kate Bowler

After we read and discussed Kate Hennessy’s memoir of her grandmother, Dorothy Day, in The World Will Be Saved By Beauty and Alice McDermott’s novel The Ninth Hour, our selection committee decided to include a theological treatise in our rotation. The Rev. Gerhard Lohfink had garnered such rave reviews for Jesus of Nazareth: What He Wanted, Who He Was that it was hard to pass it up. The late Daniel J. Harrington, S.J., a longtime professor of New Testament at Boston College and a renowned expert on Scripture, had given the book a ringing endorsement: “Lohfink’s Jesus of Nazareth is the best Jesus book I know.”

Lohfink set out to discover and explain what was unique about Jesus of Nazareth, incorporating previous scholarship and traditional understandings of Jesus but also striving for a fresh analysis. “He emphasizes that Jesus’ life is a historic event,” wrote the Catholic Book Club moderator Kevin Spinale, S.J., in an essay in April on the book. “Visible and tangible, as dramatic and concrete as an eclipse. Second, Lohfink argues that Jesus’ life and the way he understood himself need to be interpreted through the totality of the canonical Scriptures, particularly the texts of the Old Testament.”

Father Spinale also credited Lohfink for not taking the simplistic route of trying to find “the real Jesus” hidden behind later historical accretions. “Neither Jesus’ humanity nor Lohfink’s human reasoning stems from a corrosive struggle to discover the historical Jesus washed of ecclesial murk,” Father Spinale wrote. “Lohfink’s Jesus of Nazareth, the man we intend to meet by our modern, critical apparatus, cannot be met but through thoughtful interpretation of the Jesus of the Scriptures revered and interpreted through the experience of Jesus within the Christian community of faith.”

The Catholic Book Club has discussed a memoir, a novel, an academic work, a biography and now, again, a memoir. Do you have suggestions for what we might choose next?

Some members admitted in the discussion forum on Facebook that Lohfink’s theological arguments occasionally went over their heads, but on the whole, readers appreciated his prose. “I doubt this book would encourage faith in non-believers, and it didn’t bolster mine or bring me out of complacency,” commented one reader, Sara Damewood. “What it did was help me better understand Jesus and the early Christian community.”

After we finished with Lohfink, our selection committee felt that perhaps it was time for a biography. John Loughery’s Dagger John: Archbishop John Hughes and the Making of Irish Americahad been recently reviewed by the Rev. Anthony Andreassi for America. “When a historical figure has a reputation as large as Hughes, it can be hard to separate fact from fiction,” Father Andreassi wrote. “However, in this new biography of the most significant U.S. Catholic leader from the mid-19th century, John Loughery not only handles the historical record prudently but also mines the data of the life and times of Hughes with verve and just enough detail to keep the reader moving eagerly forward to the next chapter.”

Indeed, Loughery’s account of the legendary archbishop of New York did keep readers engaged, in part because many of the political and social issues of Hughes’ day are paralleled by our own controversies today. For example, among Hughes’ most notable causes was the defense of immigrants against bigotry, discrimination and even violence, particularly the Irish immigrants pouring into the city at the middle of the 19th century (as Loughery notes, Hughes was not quite so enlightened when it came to other minorities). And of course, Hughes was as much a politician as a priest, and an intellectual brawler who loved a good public debate. “Hughes was such a political fellow that it is hard to read the book with anything less than political sensitivities,” wrote reader David W. Madsen.

“John Hughes fought all his life,” Father Spinale wrote in his interpretive essay on Loughery’s biography. “Beyond pugnacious, he was truculent. John Loughery’s portrait of John Hughes is fascinating because of his depictions of the ferocity of Hughes and the wildness of New York from the 1840s through the 1860s.”

An added bonus of our selection of Dagger John was that the author agreed to answer readers’ questions about the book and his writing process. “I am interested in religious history but am also very interested in social and political history, especially of the nineteenth century,” Loughery commented when asked why he had chosen to write about Hughes. “And Hughes was the man for that. Had he not become a priest, he would have become a Whig congressman and worked in Congress with his beloved Henry Clay.”

In recent weeks the Catholic Book Club has begun to discuss our fifth selection: Kate Bowler’s unique and moving memoir, Everything Happens for a Reason: And Other Lies I’ve Loved. A professor at Duke Divinity School and an expert on “prosperity gospel” teachings, Bowler discovered in 2015 that she had Stage 4 colon cancer—and had to face the question: What does it mean to die young in a society that insists everything happens for a reason?

Publishers Weekly called Bowler’s memoir a “poignant look at the unpredictable promises of faith,” and commented that “Bowler’s lovely prose and sharp wit capture her struggle to find continued joy after her diagnosis.”

So: a memoir, a novel, an academic work, a biography and now, again, a memoir. To offer the broadest possible range of quality books with spiritual and intellectual heft, we would like to keep this sort of rotation going. Do you have suggestions for what we might choose next? Are you interested in reading and discussing with us? Join the Catholic Book Club at americamagazine.org/catholic-book-club or on Facebook at facebook.com/groups/americacbc/.

This article also appeared in print, under the headline “Highlights from conversation on 'Jesus of Nazareth' and 'Dagger John',” in the Fall Literary Review 2018, issue.