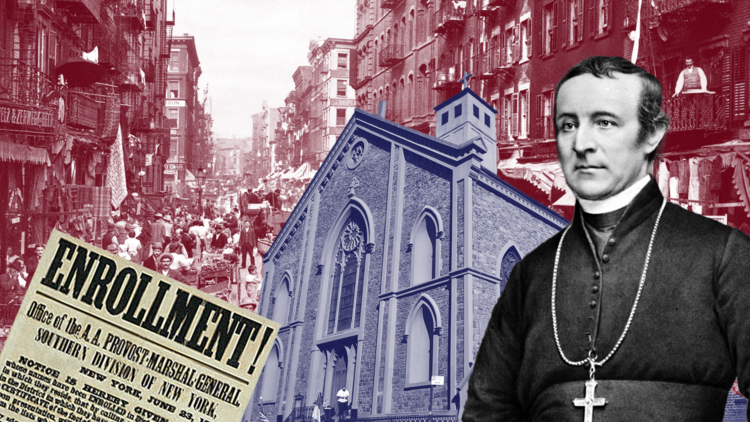 Born in Ireland in 1797, John Hughes was fond of saying that for the first five days of his life, he enjoyed social and civil equality with the most favored subjects in the British Empire. But that status ended on the day of his baptism. Hughes went on to spend much of the rest of his life fighting for this lost equality with and respect from the Protestant elite, both for himself and the various Catholic flocks he would lead as a priest and bishop in the United States. Because of his larger than life personality, his position as the archbishop of New York and the stories of his often very public battles with government officials as well as other clerics, Hughes not only captured the attention and imagination of his contemporaries but has also fascinated people down to our own day.

In his 2002 film “Gangs of New York,” Martin Scorsese included a scene in which a fictionalized Hughes rallies a crowd of Irish toughs armed to the teeth to protect his cathedral from a nativist mob threatening to burn it. When Scorsese was a student in a Bronx Catholic high school in the late 1950s, he had learned about the real Hughes and his supposed threat in 1844 to the city’s mayor that he would tell the Irish “to turn New York into a second Moscow” if one of his churches was touched. (Napoleon had burned Moscow to the ground in 1812.)

Archbishop Hughes supposedly threatened "to turn New York into a second Moscow” if one of his churches was touched by rioting nativists.

None of the churches were damaged. The diocesan priests who taught Scorsese (and also wrote the church history textbook he used) were still fiercely proud of their former archbishop and his championing of the rights and dignity of their forebears at a time when Catholics were still often marginalized by the Protestant establishment.

American Catholics have faced nativism before. It was wrong then, and it's wrong now.
The Editors

When a historical figure has a reputation as large as Hughes, it can be hard to separate fact from fiction, as is the case with the possibly apocryphal tale of Hughes’s threat to the mayor. However, in this new biography of the most significant U.S. Catholic leader from the mid-19th century, Dagger John: Archbishop John Hughes and the Making of Irish America, John Loughery not only handles the historical record prudently but also mines the data of the life and times of Hughes with verve and just enough detail to keep the reader moving eagerly forward to the next chapter.

Loughery is not the first to try his hand at a life of Hughes. In 1866, just two years after his death, John Hassard, the archbishop’s lay private secretary, wrote Hughes’s life story. Given the proximity of the author to his subject (both in time and relationship), the book has all the expected strengths as well as shortcomings. In 1977, Richard Shaw wrote a second and quite respectable biography, but he based it almost exclusively on secondary sources, thus limiting its value. In this new attempt, Loughery not only has the benefit of distance for a more comprehensive view of his subject but also did the hard and often tiresome work of archival research using scores of handwritten letters as well as other primary source material available in the United States.

In academia today, biographies of bishops attract little interest (especially for a young professional seeking tenure in a history department). Nevertheless, there is still a demand for episcopal biographies among educated readers, especially when the subject’s impact extended beyond his priests and people. Part of what makes this biography relevant outside the field of American Catholic history is that Hughes was the first U.S. Catholic bishop to become a national figure, with connections and interactions stretching at times all the way to the White House.

Hughes was the first U.S. Catholic bishop to become a national figure, with connections and interactions stretching at times all the way to the White House.

For example, in May of 1846, just a month into the Mexican-American War, President James Polk asked to meet privately with Hughes to build Catholic support for the war effort. In addition to getting two Jesuits from Georgetown College to serve as chaplains for the U.S. forces, Hughes also used the opportunity to build his own reputation as a major player by offering to serve as an emissary to the Mexican government. Although this never came to pass, 15 years later at the start of the Civil War, Secretary of State William Seward (with whom Hughes had developed a good working relationship when the former was governor of New York) did ask him to travel to several European capitals “to promote healthful opinions” about the justice of the Union cause.

While there is some question as to whether Hughes really did whip up a mob of Irishmen to protect his churches in 1844, there is no doubt that he most certainly did address a crowd of his fellow countrymen in July of 1863, which also turned out to be his last public appearance. However, this time he was trying to calm the Irish, not incite them. The occasion was the New York City draft riots, in which mobs of poor Irish immigrants reacted violently to the imposition of conscription to bolster the Union forces. Since wealthy men could hire a replacement for themselves, the discontent was fueled both by anger toward this favoritism as well as antipathy toward the city’s growing black population, whom many of the Irish resented for both racial and economic reasons. Quite ill by this summer, Hughes addressed a relatively small crowd on the fourth day of the unrest, when the rioters had spent most of their force. When order was restored by the end of the week, it is clear that it had less to do with Hughes’s intervention than with the arrival of federal troops, including some of whom had recently fought in the Battle of Gettysburg.

American Catholics have faced nativism before. It was wrong then, and it's wrong now.
The Editors

Hughes had the descriptor “Dagger” placed before his name in his own day (and ever since) due to his fiery personality, which blazed at times at those both within the church and without. In more recent years, some have criticized him for his bluster and street-fighter tactics, citing the effects they may have had on fanning the flames of nativism while also encouraging Catholics to remain in their ghetto rather than engage with the dominant Protestant society. However, in 1966 John Tracy Ellis offered a more nuanced (and arguably more valid) assessment of Hughes and his style of leadership. The former dean of U.S. Catholic history pointed out that American Protestantism of the 19th century was by no means as open and irenic as it has been for the last half-century. For this reason, according to Ellis, “there were times when [Hughes’s] very aggressiveness was about the only approach that would serve the end he was seeking, viz., justice for his people.”

This article also appeared in print, under the headline “An archbishop fit for a Scorsese film,” in the April 30, 2018, issue. 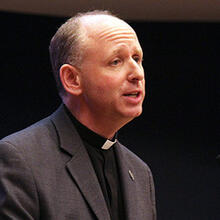 Rev. Anthony D. Andreassi, a priest of the Brooklyn Oratory, holds a doctorate in history and teaches at Regis High School in New York City.