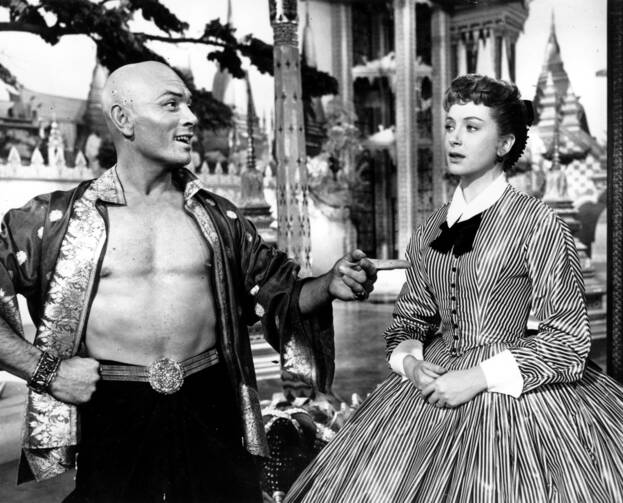 Adversity can be inadvertently revealing, exposing sides of ourselves we might otherwise never have expressed so baldly. When the playwright and lyricist Oscar Hammerstein II was faced with spurious accusations of disloyalty to the United States during the Red Scare of the early 1950s because of his associations with left and liberal causes in the ’30s and ’40s, he initially responded with defiant dismissiveness. But then he realized the potential consequences to a career that was going full steam with his writing partner, the composer Richard Rodgers. Their musicals “South Pacific” and “The King and I” were both running to capacity on Broadway and in London, which required, among other things, frequent trans-Atlantic travel, hence a functioning passport.

And so, as Todd S. Purdum describes in detail in his involving new book Something Wonderful: Rodgers and Hammerstein’s Broadway Revolution, in 1953 Hammerstein drafted a 30-page statement to the State Department not only disavowing any former association with Communist-affiliated organizations but expressing support for the current “police action” in Korea and stating, in a plaintive self-assertion that is humbling to read, “I have helped write many of the songs of this nation.”

Indeed he had. With Rodgers, Hammerstein did as much to create mid-20th-century American culture as anyone (Ed Sullivan? Leonard Bernstein? Arthur Miller? Lucille Ball?). In a handful of towering musicals, they captured the nation’s broad-shouldered postwar confidence as well as its perennial mix of idealism and nostalgia. Nearly all their most enduring shows are period pieces, and a few do not take place in the United States or feature American characters at all. But whether set in the 19th-century Thai court or the verdant hills of Nazi-era Austria, the musicals of Rodgers and Hammerstein are unmistakable products of 1950s America, with its ebullience and conformism, its consumerist abundance and neo-Victorian prudery.

Rodgers and Hammerstein did as much to create mid-20th-century American culture as anyone (Ed Sullivan? Leonard Bernstein? Arthur Miller? Lucille Ball?).

The question of whether their work has transcended the square, segregated era of its making—a purportedly halcyon age that some people in this country have in mind when they talk about making America great “again”—has partly been answered by their musicals’ continuing popularity, and in particular by a series of high-profile contemporary revivals: “South Pacific” and “The King and I” at Lincoln Center Theater in recent years, “The Sound of Music” in London a dozen years ago and currently a splendid “Carousel” on Broadway. The Oregon Shakespeare Festival features an “Oklahoma!” that has recast its two main romances with same-sex couples. While the gender and racial politics of Rodgers and Hammerstein’s shows can range from outmoded to outright offensive by modern lights, directors like Bartlett Sher have shown how they can still go over today. (His current Lincoln Center production of “My Fair Lady” is similarly exemplary.)

Purdum’s central case, conveyed by the word “revolution” in his title, is that the work of this pair of savvy producer/writers is more rich and complicated—revolutionary, even—than they’re given credit for, partly because of the passage of time, partly because of the mostly so-so film versions by which they are widely known. But for all their serious themes and liberal-ish politics, Rodgers and Hammerstein did not stand athwart the triumphalism of the ’50s; instead they gave the nation’s self-satisfied middle classes the light opera they didn’t know they needed, creating a new market they then oversupplied to the point of saturation, only to be overtaken by younger competitors (and then rock ’n’ roll). If that’s revolution, it is a peculiarly American kind, a la Disney or Steve Jobs, and it is as much about consolidation as upheaval.

The Broadway musical has been born again. Will movie musicals be far behind?
Rob Weinert-Kendt

"The Secret Life of the American Musical" is as entertaining as it sounds.
Michael V. Tueth, S.J.

Even as young pros on the make, Purdum shows, both Rodgers and Hammerstein were businessmen as much as artists, rising in a commercial theater of the 1920s and ’30s that teemed with brassy ambition and cutthroat competition. Rodgers ascended especially fast and stayed at the top of his field for more than three decades, replacing his brilliant but short-lived partner Lorenz Hart with Hammerstein without skipping a beat. Meanwhile, Hammerstein plugged away more modestly, learning the craft of play construction from European operetta and the trade of theater from his family (his grandfather, the original Oscar Hammerstein, was a larger-than-life theater impresario). His most noteworthy effort prior to teaming with Rodgers was “Show Boat,” in 1927. Written with Jerome Kern, it is often credited as the first serious American musical, not only for a plot that addressed racial prejudice but for another kind of integration: of songs that advanced the show’s story and themes rather than serving as mere tuneful diversions.

That last innovation was the secret sauce of Rodgers and Hammerstein’s collaboration, which began auspiciously with “Oklahoma!” Purdum manages to recapture the unique frisson of what is by now a well-worn bit of theater lore: the moment in 1943 when a Broadway curtain came up not on a chorus of dancing girls but on a cornfield where an older woman churned butter and a cowboy hopped over a fence to sing, “There’s a bright, golden haze on the meadow.” Here was a poignant wartime reminder of the frontier land our boys were fighting for, and a seemingly new form of musical theater that had been waiting to be born.

Smartly if cautiously crafted, often wise and heartfelt but seldom raucous or penetrating, the musicals of Rodgers and Hammerstein create their own bright, golden haze.

It was a powerful mix, and the show’s extraordinary success nearly spooked the pair. But not for long: The darkly soaring “Carousel” soon followed, as did the ill-begotten “Allegro.” Like all the stories of R&H’s more minor works—“Me and Juliet,” “Pipe Dream,” “Flower Drum Song”—the tale of the faltering “Allegro” is instructive. Styled as an experiment, its meandering record of a nondescript small-town man in crisis clearly failed for lack of nerve, not because of overweening artistic ambition.

Rodgers and Hammerstein were already middle-aged men by the time of their earliest success together, and it showed in their work for better and for worse. Smartly if cautiously crafted, often wise and heartfelt but seldom raucous or penetrating, their musicals create their own bright, golden haze. And that is no small thing. Purdum’s excellent book continues an argument that is well worth having, but as with most enduring artifacts of popular culture, from Jane Austen to the Beatles, the work itself is sufficient argument. There must be a reason, after all, that despite my personal aversion to the kitschy Gemütlichkeit of “Sound of Music,” my nightly bedtime song for my young boys (at their insistence as much as mine) is none other than the simple faux-folk waltz R&H inserted into the show’s second act to humanize the distant Captain Von Trapp: “Edelweiss.” Bloom and grow forever, indeed.

This article also appeared in print, under the headline “The men behind our favorite musicals,” in the July 9, 2018, issue.