"The Secret Life of the American Musical" is as entertaining as it sounds.

The Secret Life of the American Musicalby Jack Viertel

Well, it was bound to happen sooner or later. Someone has blown the lid off the American musical, claiming to reveal the “secret life” of the beloved creations of Rodgers and Hammerstein, Stephen Sondheim, Jerry Herman, Cole Porter, Kander and Ebb and the like. He promises to reveal the patterns and purposes of the songs in some of the biggest hits in musical theater. But who wants to know that? Just enjoy each show for its own sake and marvel at the ingenuity of the composers and lyricists? Well, we know the answer to that. As someone once said, “The unexamined play is not worth attending” (or words to that effect).

In a move that would make Socrates proud, Jack Viertel is attempting to do just that. Viertel is a major Broadway producer and the artistic director of New York City Center’s Encores! series, which has presented revivals of three Broadway musicals every season for the last 22 years. A former drama critic and arts editor at The Los Angeles Herald Examiner, he has been teaching a course on musical theater at New York University for the last 10 years. He claims to have been inspired by the work of his wife’s uncle, Harry Levin, who as head of the Comparative Literature Department at Harvard “used to spend an entire semester picking apart only four of Shakespeare’s plays.... He was like a Swiss watchmaker taking apart and reassembling a perfect timepiece.”

Viertel arranges his study with an analysis of every standard number in a show and how it serves the purposes of the play, with particular attention to the importance of pleasing the audience. His list of numbers, from the overture to the curtain call, includes almost 20 different musical moments, with abundant examples from many (but not all) of the most successful shows, beginning with “Oklahoma” (1943) all the way up to “Hamilton” (2015). Rather than observe every one of the types of numbers, let us highlight a few of them, with a salute to the best examples.

In his opening pages, Viertel offers his rationale for this dissection of the body of successful musicals. He writes, “Such blessed events don’t have much of a chance unless the machine is up and running. Without the lungs and liver, there’s no way for the heart to soar or the brain to make lightning and thunder.” (How many mixed metaphors can a writer pack into two sentences?)

In his treatment of great opening numbers, he analyzes some of the best ones, like “South Pacific,” “Gypsy” and ”A Funny Thing Happened on the Way to the Forum,” saying that each of these “leaves no doubt as to what the tone of the evening will be.” He spends even time and space on the opening numbers of “Oklahoma” and “The Sound of Music,” commenting that whenever Oscar Hammerstein went outdoors, the earth seemed to sing to him—just think of “All the Sounds of the Earth are Like Music” and “The Hills are Alive with the Sound of Music.” It is puzzling that he did not include the 15-minute opening number in “Titanic,” which not only sets an ominous tone in the score but also manages to tell the audience the importance of the maiden voyage to the owner, the builder, the captain, the crew and the assortment of passengers, from those in first class to those in steerage.

Viertel then observes the function of what he calls the “I Want” songs, including Eliza Doolittle’s “All I Want is a Room Somewhere”; Mama Rose’s battle cry, “Some people can be content/ playing bingo and paying rent...but some people ain’t me”; or Alexander Hamilton’s “Hey yo...I’m young, scrappy and hungry/And I’m not throwing away my shot.” One of the most interesting patterns he discovers is the frequent appearance of the “conditional love songs,” the most famous of which might be “If I Loved You” from “Carousel,”and others like Sarah Brown’s declaration, “I’ll know when my love comes along” from “Guys and Dolls.” He also observes the many examples of second romantic couples. “The second couple is an age-old device, of course,” Viertel explains. “Shakespeare used it a lot (think ‘Much Ado About Nothing’), and operettas in the 1920s usually had them...principally to provide laughs.... By the time Hammerstein got to ‘Oklahoma,’the idea was virtually obligatory.” However, they were not always comic figures. The stories of the second couples in “The King and I” and “South Pacific”border on the tragic.

And so Viertel goes on until he comes to what he calls the Next-to-Last Scene. When Mama Rose in “Gypsy”confronts her daughter Louise after she has become the star Gypsy Rose Lee, she asks, “All right. But just one thing I want to know. All the working and pushing and finagling, all the scheming and scrimping....What’d I do it for?” Louise answers, “I thought you did it for me, Momma.” At the end of “Fiddler on the Roof,” when Tevye and the others are forced to leave their beloved village, Anatevka, one of them asks the local rabbi: “Rabbi, we’ve been waiting for the Messiah all our lives. Wouldn’t this be a good time for him to come?” The rabbi answers, “We’ll have to wait for him someplace else.” With many more examples of this number (in “The Music Man,” “Caroline, or Change” and others), Viertel shows how these Next-to-Last Scenes give the audience “the opportunity to rack back through the entire evening and see how it fits together. It’s deeply pleasurable. We understand why we came to church.” The theater experience ends with the closing numbers, which, Viertel says, “come in two varieties: the intimate ones that tie a beautiful knot [“The King and I”] and the noisy ones that shoot the works [“Hairspray”].... But they head for the same place—a quiet ‘wow’ or ‘a riotous one.’”

Scattered throughout these analyses, Viertel tells many backstage stories about how the directors and composers managed to avoid a disaster, sometimes only a few hours ahead of opening night. And, as a bonus, he presents a very useful list of what he considers the best original cast albums of the shows he has analyzed at some length and, finally, a section in which he writes a paragraph each for about 20 musicals that are not quoted in the book. Some of these omissions are unforgivable: “Show Boat,” “Hello, Dolly,” “Kiss Me Kate,” Chicago,” “Annie Get Your Gun.” Really, Mr. Viertel? How could you have ignored these classics? If you wish to receive absolution for this sin, then for your penance, please write another book as enjoyable and informative as this one.

This article also appeared in print, under the headline “Broadway Rhythms,” in the October 24, 2016, issue. 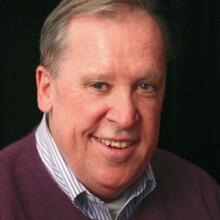 Michael Tueth, S.J, professor emeritus at Fordham University, has retired and is living in St. Louis, where he is engaged in writing, conducting retreats, providing spiritual direction and other ministries.