The Rich We Will Always Have With Us 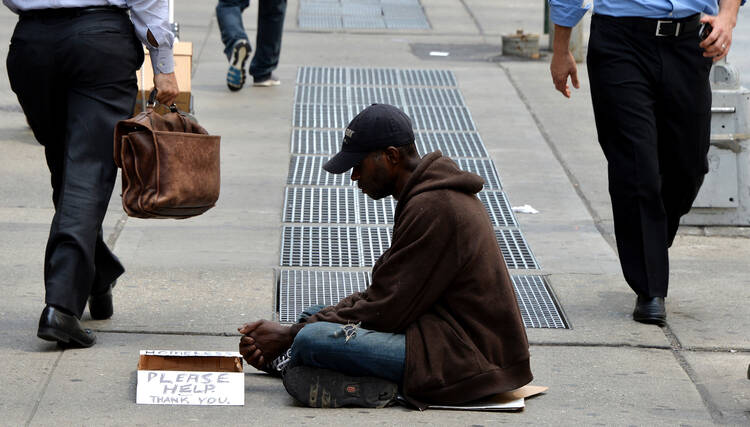 In this June 16, 2014 file photo, a homeless man sits on a sidewalk in New York City. (CNS photo/Justin Lane, EPA)

The list of factors fueling the new transatlantic nationalism is long and contested, but work, wages, inequality and immigration certainly belong on it. All of these were integral to the uneasy post-Cold War status quo in which inequality was considered tolerable because the free flow of persons and goods made it possible for Chinese farmers to become factory workers and for Polish plumbers, Indian engineers and Guatemalan fruit-pickers to seek better wages in richer countries. The economic tide was rising, so what did it matter if the biggest ships became vastly larger and more opulent?

The Wealth of Humansby Ryan Avent

Well, now we know. The people turning to nationalism—the middle and working classes in the richest societies—are well off in absolute terms but feel economically left behind. Their wages are in the top fifth globally but have not grown at all in several decades. Western societies need to figure out how to address their concerns and accord them dignity without fostering resentment.

The paradigmatic (if not statistically average) Trump, Brexit or Le Pen voter is used to earning his daily bread, as Adam did, by the sweat of his brow. But in the digital age, only a small percentage of people in rich countries work in fields and mines. Instead of struggling against thorns and thistles, workers battle kinks in the supply chain and low consumer confidence. It is no longer clear that human effort is what adds value to our products.

As Ryan Avent argues in The Wealth of Humans, the biggest value-creator in the digital age is neither labor nor hard capital like land or machinery. It is social capital, the information and customs embedded in our common life. Apple and Google do not employ large numbers of people or own a great deal of equipment. They are nevertheless valuable companies because they capitalize on cultures—theirs, Silicon Valley’s and that of the United States. In this country, widely shared but intangible goods like the rule of law, respect for innovation and even the stigma attached to unemployment all contribute to corporate productivity.

In this country, widely shared but intangible goods like the rule of law, respect for innovation and even the stigma attached to unemployment all contribute to corporate productivity.

Even if we do not all work, then, we all create wealth. The problem is that we do not all share in that wealth. As Avent says, “While social capital lives in the heads of the people who make the economy go, its benefits flow disproportionately to the owners of financial capital. That mismatch is a source of significant economic trouble.”

The trouble is inequality, and it is magnified by automation. As a growing share of human workers compete with machines on the labor market, wages fall while profits keep accruing to business owners. Because wages are most people’s sole path to wealth, the abundance of labor will keep the global poor—and the rich world’s working class—from improving their conditions.

Avent thinks labor abundance will also foster more conflict over migration. Even as communication technology and free trade have helped diffuse wealth to more of the world, their bigger effect has been to intensify the social capital of global business centers like New York, London and San Francisco. “There is no anti-poverty programme in the world as successful as access to American society,” according to Avent.

This means that as wages for less-skilled labor decline, ever more people will have an incentive to move to high-social-capital places. Current residents’ economic incentive, however, is to keep newcomers out. Even if economic migrants are not met with hostile nativism in their new countries, they face housing costs that are just as exclusionary. As Avent notes, the biggest winners in San Francisco’s economic boom have been not tech workers but the real estate owners who serve as the city’s gatekeepers.

In drawing attention to the productivity of common cultures, Avent, a writer and editor for The Economist, makes an economic argument that is (I assume unintentionally) consistent with Catholic teachings on human solidarity and the inherent dignity of the person. Like the popes since Leo XIII, Avent believes that the market alone cannot produce a just distribution of wealth. As he puts it, “Left alone, the invisible hand is simply the thudding fist of the powerful.”

Like the popes since Leo XIII, Avent believes that the market alone cannot produce a just distribution of wealth. As he puts it, “Left alone, the invisible hand is simply the thudding fist of the powerful.”

Avent thinks that if we want to bring about greater economic justice, our governments should allow more of the world’s poor to move to the rich world. In accord with the church’s call to welcome the stranger, Avent hopes that residents of rich societies “could recognize the wild contingency of their wealth, cultivate human empathy, and do what they can to extend the wealth of humans to everyone.”

Still, not all of the world’s poor can or would want to move to global centers of social capital. What happens to them in an age of abundant labor? Do they remain “disposable,” as Pope Francis often laments? Avent thinks it is easier to expand immigration than to build up social capital in the poorest regions. He may be right, but this approach still excludes too many.

The cities with the highest social capital—New York, London and San Francisco—also have some of the highest economic inequality. And as the social psychologist Keith Payne argues in The Broken Ladder, living in a more unequal place “has deadly serious consequences.”

Relying on dozens of experimental studies, which he describes in vivid and graspable narratives, Payne shows that even in a generally wealthy society, feeling poor relative to your neighbors will harm your health, impair your ability to make long-term plans, push you toward conspiracy theories and ultimately cause you to die sooner than you otherwise would. On measures of well-being, residents of the United States fare worse than residents of countries like Canada, Sweden or Japan, all of which are less wealthy but more equal.

On measures of well-being, residents of the United States fare worse than residents of countries like Canada, Sweden or Japan, all of which are less wealthy but more equal.

This happens because those who feel materially deprived make different decisions than those who feel secure. Two of Payne’s experiments showed that people who are placed in conditions of greater inequality are more likely to take risks, hoping to maximize short-term gains. But those risks lead to worse average outcomes and exacerbate inequality. Payne calls this the “live fast, die young” strategy, bred through evolution into all species as a way to cope with scarcity.

Inequality may also grow because the relatively rich seek to preserve their wealth through politics. In a stock market simulation game that Payne designed for an experiment, people who were led to believe that they had lower status than others in the study were more likely to support both redistribution and a more democratic process for deciding the game’s rules. Those who were made to feel superior wanted less redistribution and more restricted voting rights.

This psychological dynamic mirrors the economic one Avent sees regarding access to social capital. Both dynamics leave working-class Americans in an uncomfortable position that nationalist politicians can exploit. They feel poor compared to the super-rich, but they feel threatened by a rising class of immigrants, who appear to be economic competitors.

Payne’s analysis implies that shutting the global poor out of American society would not actually improve conditions for the economically anxious. That is because the rich would still be with them. And as Payne points out, “The inequality reflected in statistics like the Gini coefficient are driven almost entirely by how wealthy the rich are.” Thus economic growth alone cannot fix the problems of inequality, either. Payne wants us to start “building a flatter ladder” between rich and poor and “get better at living amid its rungs.”

Searching for George W. Bush in his portraits of the soldiers he sent to war
Jonathan Malesic

Doing so will not be easy on either the national or the global scale. Avent points to the Industrial Revolution for a sobering precedent. It took two centuries of bloodshed to find a stable, if still rather unjust, system to distribute the wealth that steam and electricity made possible. Now that settlement is being disturbed.

Given that downward pressure on wages will likely increase in the years ahead, we may need a system for distributing wealth that does not depend so much on employment. Avent’s argument about the shared nature of social capital helps show why generous redistribution, even to nonworkers, is warranted. Payne’s argument shows why it would drastically improve people’s lives.

This article also appeared in print, under the headline “The Rich We Will Always Have With Us,” in the May 15, 2017, issue.

Jonathan Malesic, who lives in Dallas, is writing a book about the spiritual costs of the American work ethic.