Searching for George W. Bush in his portraits of the soldiers he sent to war 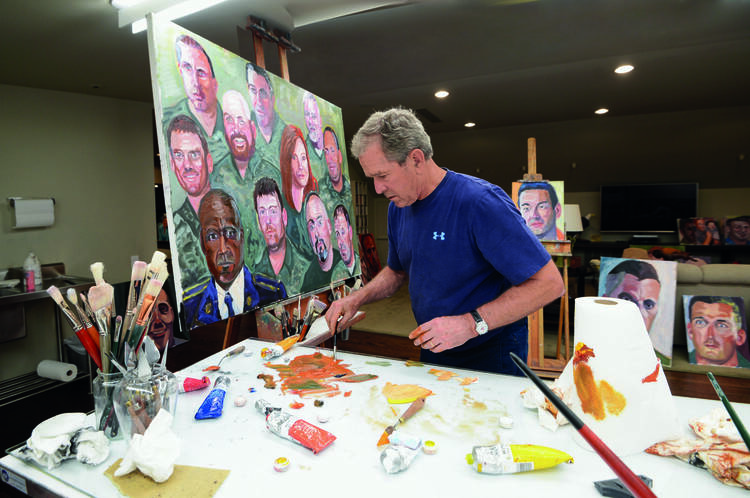 The most renowned artist to have an exhibition this year is the early-career portraitist George W. Bush. The former president took up the brush only a few years ago, and with every new set of works—from the bathtub self-portraits leaked from a hacked cellphone in 2013 to an exhibition of portraits of world leaders the following year—commenters look not just for his progress in technique but also for progress in self-understanding. In the belief that art reveals the character of the artist, viewers scrutinize the paintings for signs that Bush is coming to terms with having ordered a costly pre-emptive war and overseen a regime of torture, domestic spying and indifference to natural disaster.

Bush’s new exhibition, “Portraits of Courage,” features 66 paintings of wounded veterans whom the former president has come to know through his Military Service Initiative, which helps post-9/11 veterans make the transition to civilian life. (Proceeds from a book based on the exhibition will support this initiative.) Although Bush painted the portraits to call attention to the individual men and women who were injured carrying out his orders, it is his own character that is of most interest to his critics.

In this exhibition, the artist—once the most powerful man in the world—is trying to elevate his subjects,

The exhibition turns one of the oldest conventions of portraiture on its head. For centuries, rulers commissioned portraits from the lowly. The sitter is the one with power, while the portraitist aims to convey the patron’s invisible qualities: authority, wisdom, magnanimity. In this exhibition, however, the artist—once the most powerful man in the world—is trying to elevate his subjects, tell their stories and bring their virtues to light.

Bush accomplishes this by building a terrain of extremely thick layers of oil paint on the canvas or board. Doing so can lend either reality or surreality to the portraits, as scars are made palpable; facial folds are deepened; and the normally invisible injuries of guilt, depression and post-traumatic stress are inscribed on surfaces.

Lt. Col. David Haines appears as a fleshy, disembodied face that nearly fills the frame and merges with the turquoise background. Haines’s eye sockets are deep—because Bush has dug them out and piled lighter shades around them. Thick waves and globs of paint cover his forehead, perhaps signaling an inner struggle.

One of the most affecting pieces, though, is one of the least textured. Petty Officer Chris Goehner, who worked with a medical trauma unit in Iraq, is painted entirely in red. Different tones and values rather than heaps of paint indicate the furrows in his brow and the terrified vulnerability of a man who suffered nightmares for years.

Bush “captured everything about the way I was back then,” one soldier said.

First Sergeant Robert Ferrara, who served a 23-year career in the Army, said in a recent interview in the exhibition gallery that Bush “captured everything about the way I was back then,” before Ferrara began to heal from depression and survivor’s guilt. Ferrara looks emotionally shattered in his portrait, which is incorporated into a mural featuring dozens of service members in uniform. He stares into the far distance but seems to shrink from something nearby.

Ferrara never sat for a portrait—Bush works largely from photographs. He got to know the president through veterans’ events at Bush’s ranch in Crawford, Tex. Ferrara credits those programs with helping him to heal. At the exhibition, his wife Melissa compared him to the painting and said, “Look how far you’ve come.”

Ferrara said that his path to healing was a journey of courage, beginning with the recognition that he needed to be helped. The show depicts all stages along that way. Bush painted one of Ferrara’s friends as round-faced and avuncular, grinning widely. He does not look like a man in pain. But, Ferrara said, “He hides it well.”

At a time when presidential character is a pressing concern, “Portraits of Courage” shows the humility of a democratically elected leader who recognizes that he, too, is a citizen. Bush’s commitment to helping wounded veterans succeed in civilian life speaks to his compassion. These are essential virtues for a president. Ferrara described his former commander in chief as “a normal, down-to-earth guy” whom he respects “not only as a president but as a man.”

But the humility it takes to reach out to citizen-soldiers is not the same as the intellectual humility needed when considering war or the humble acceptance of responsibility for war’s consequences. Bush wrote in his memoir Decision Points that thinking about the Iraq War’s mistaken casus belli—the weapons of mass destruction that were never there—gave him “a sickening feeling,” even after he left office. Still, he has expressed no regret about his costly decision.

Public expressions of regret and private reconciliations may be different things. This exhibition raises the question of whether a leader can, after leaving the chain of command, become the friend of someone he ordered to go into mortal danger.

It is a question few of us have to confront personally. During Bush’s brief remarks about the exhibition, delivered to reporters gathered in the gallery, a malfunctioning public address speaker loudly popped and buzzed. As an aide hustled over to turn the device off, Bush joked to the veterans lined up next to him, “That remind you of anything?”

“Portraits of Courage,” paintings by George W. Bush, is on exhibition at the George W. Bush Presidential Center in Dallas, Tex., through Oct.1.

CORRECTION, March 6: A group of portraits originally identified as a triptych is now referred to correctly as a mural.

Jonathan Malesic is a writer living in Dallas. He is writing a book about the spiritual costs of the American work ethic.

We admire his talent but cannot absolve him or those who voted for his preemptive war. ,,,we are the dead. Short days ago we loved, felt dawn, saw sunset glow.... John McCrae.

Perhaps, it is Mr. Malesic who needs to do some self-reflection to progress in self-understanding. He comes to his subject with deep-seated prejudice against the former President. I guess he is just upset that President Bush has artistic talent beyond proven political talents. The idea that President Bush, or anyone outside the extreme left, would ever think his presidency was justly characterized as "a regime of torture, domestic spying and indifference to natural disaster" is highly unbalanced, and not at all what the millions of veterans think of their service in 1) ending the Taliban regime, 2) ridding the world of Saddam Hussein, a ferocious dictator (who used chemical weapons on his own people, whose secret police tortured and killed hundreds of thousands of his own people, who sponsored foreign terrorist acts) , of 3) destroying most of Al-Qaeda worldwide, 4) of thwarting multiple terrorist attacks in the US and protecting the Western world from further large attacks from Islamic Jihadi terrorism.

Yes, his CIA got the Nuclear WOMD wrong (so did Kerry, Clinton, the UK, Germany, etc.), and some of the excesses of the Patriot act went too far. And, he ran up the national Debt ($5.8B --> $10B) and presided over the recession, among other mixed domestic policies. But, even many of his critics (not Trump) agreed, Bush "kept us safe" and today we are living with the results of the Obama legacy: reversals in Iraq & Afghanistan, ISIS, Syria, Libya, Russia, Drone wars, Nuclear N. Korea and probably Iran, Obamacare, BLM, $20 Trillion debt & Trump! Some perspective, please.

The Chisholm's quote of John McCrea must jostle the memory of some "America" readers to the lines of the esteemed poet and patriot Joyce Kilmer who wrote them in his "Rouge Bouquet" shortly before being killed in the Second Battle of the Marne in 1918.

There lie many fighting men
Dead in their youthful prime
Never to laugh nor love again
Nor taste the summertime.