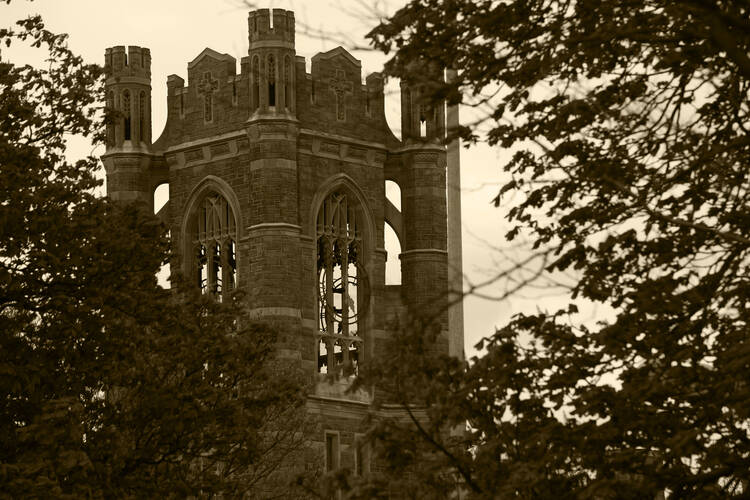 The genre is not a distinguished one. Commissioned by university leaders to commemorate an anniversary, written to meet the deadline of said anniversary, marketed to alumni hazily aware of the anniversary, published by a university press eager to capitalize on a captive alumni audience, scrutinized by aging ex-administrators who begin by searching for their name in the index, obligated to touch on each new program and each new president—all this works against the writing of a university history an ordinary reader would want to, well, read. When I scanned the table of contents for Thomas Shelley’s new history of Fordham, and saw consecutive chapters on the history of the law school, the school of social service and the graduate school, I sighed.

That Shelley overcame these obstacles and produced a lucid, coherent history is accomplishment enough. That he did so with wit is even more gratifying. Shelley and I have never had a conversation of more than two minutes, but I’m willing to buy a drink for anyone who slyly wonders why the first Jesuits at Fordham banned card playing but not backgammon. Or why some New York Jesuits in the 1930s could not be bothered to read, gulp, America. Or why Pope Pius XI’s blessing of a seismograph on the Fordham campus remains “one of the lesser tapped selections in the repertoire of papal blessings.”

The story is in its way grand. After a failed beginning in, of all places, rural Kentucky, a group of Parisian Jesuits exiled from a turbulent and often anticlerical France, saw in the growth of New York City, populated in large part by impoverished Catholic immigrants, an opportunity. The first decades after the 1841 founding were inauspicious: feuds with the overweening local archbishop, John Hughes, dual campuses in lower Manhattan and the Bronx that divided faculty attention and resources, and constant striving for financial stability and academic respectability.

Neither stability nor respectability came easily.

Neither stability nor respectability came easily. The American educational marketplace in the 19th century rewarded entrepreneurship—the state of Ohio claimed 37 colleges in 1900 while the nation of England possessed four—but was also competitive. Fordham Jesuits, like their Jesuit contemporaries up and down the Atlantic seaboard, strained to at once serve socially ascendant Irish and German Catholics contemplating sending their sons to Harvard (as a surprising number did) and a socio-economic base firmly located on the lower rungs of the economic ladder. New York’s most famous Catholic, Gov. Al Smith, whose own formal education ended with graduation from a Catholic grade school on the lower East Side, urged Fordham leaders to prevent Catholic higher education from becoming “the privilege of the few.”

Still, what had been a small college during the 19th century became a proper university in the first decades of the 20th century, with professional degrees in pharmacy, medicine and law. Even compared with its peers, however, Fordham’s financial vicissitudes were startling. While tiny Canisius College in Buffalo raised one million dollars in the early 1920s, a “Greater Fordham” campaign totaled only $197,000 in cash after a year, one tenth of the announced goal of just under $2 million. One class of 1911 alumnus, a young, ambitious priest and future cardinal named Francis Spellman, pledged $100 but coughed up only $25. The medical school closed. During the depression administrators scrambled to avert bankruptcy.

Academic respectability was also elusive. Into the 1930s administrators at Fordham tangled with regional accreditors. Some of the conflict was ideological. Accreditors empowered by national associations of educators did not warm to Fordham Jesuits defending the Ratio Studiorum (a prescribed sequence of Latin texts and language training first developed in the 16th century) as an educational ideal or their denigration of the “elective” system and the conventional arrangement of academic departments. One prominent Fordham Jesuit loudly described interest in research as a “fetish.”

Some of the conflict was structural. Fordham had too few full-time faculty members per student, especially in the professional schools, and even fewer books in the library. For a time in the mid-1930s Fordham lost accreditation, although it seems not to have affected already modest enrollments. Only in the 1940s, when Catholic G.I.s swarmed into Fordham and other Catholic colleges at government expense and Fordham was able to upgrade facilities and the quality of the faculty, did the accreditation tensions of the interwar period ease.

To write the history of Columbia University for much of the 20th century, or New York University in the last 40 years, or even City University of New York during the 1930s and 1940s, is to write a partial history of the metropolis.

Shelley’s superb research on Fordham’s early years pays significant dividends, but the 150 or so pages he takes to arrive at the 20th century will deter some readers. And too often off-stage is New York City itself. To write the history of Columbia University for much of the 20th century, or New York University in the last 40 years, or even City University of New York during the 1930s and 1940s, is to write a partial history of the metropolis. Posing the question in regard to Fordham is no less interesting. How did Fordham’s status as the city’s leading Catholic university, with a main campus in the Bronx, evolve in the context of New York’s unparalleled ethnic diversity? Did it matter that Fordham was located in the city that more than any other shaped modern culture, from the arts to fashion? Or that the campus was a subway ride away from the center of global finance?

Hints of Fordham’s role in New York City do peek through. Shelley notes, for example, that Jesuits in Rome in the 1930s, including the superior general or leader of the Society, wanted to fire the dean of Fordham’s pharmacy school because it was thought inappropriate to have a Jewish dean at a Catholic university. (Most of the students, interestingly, were also Jewish.) Fordham Jesuits rallied to their dean’s defense and described him in impassioned letters as a man who had worked “early and late, night and day” for Fordham’s betterment. In the end, the superior general capitulated and the dean stayed.

The episode begs for comment. At a moment when a nationalist anti-Semitism was sweeping through Europe and infecting some Jesuit communities, Fordham’s Jesuits pleaded for a Jew to lead one of their colleges. Even as the anti-Semitic Rev. Charles E. Coughlin became the most popular voice on the American radio airwaves, and an especially popular voice among Irish Catholics, Jews and Catholics seem to have studied together in the Bronx.

Equally interesting is the history of urban renewal. Readers familiar with Robert Caro’s monumental, scathing biography of Robert Moses will notice Shelley’s gentle references to New York’s master builder. Moses, Mayor Robert Wagner, Cardinal Spellman and Fordham leaders together obtained for the university an extraordinary seven and one-half acres in Midtown Manhattan in the 1950s. The entire project, from the clearing of so-called slum neighborhoods to dedication ceremonies led by Earl Warren, chief justice of the United States, and Attorney General Robert F. Kennedy, oozed New York Catholic influence and a newly found ease in the corridors of power. Moses enjoyed exchanging references to Virgil—in Latin—in correspondence with Laurence McGinley, S.J., then Fordham’s president. (McGinley also happily agreed to chair the board of the new Center for the Performing Arts at Lincoln Center.)

Shelley’s final chapters retain their verve even as the interpretive task becomes more challenging. By 1960 Fordham’s undergraduates were competing for the most prestigious national fellowships and the socio-economic status of their parents was improving (although family income levels for Fordham students still lagged below national averages.) The finances of the university, though, remained unstable, with far fewer resources than the most elite private universities (none of them Catholic) or well-funded state university flagships.

Identity questions also became more pressing. Jesuits constituted fully 40 percent of the faculty at Fordham College—the undergraduate liberal arts core—as late as 1960, although the percentage in the professional schools was much smaller. On average, they were better trained than the lay faculty as a generation of Jesuits followed the Jesuit superior general’s admonition to obtain Ph.D.’s and not succumb to the idea that “they can serve God better by work that seems to be more immediately priestly and apostolic.” Still, the question of just what role a Catholic and Jesuit university should play and whom it might educate seemed less obvious in 1960 than it had during the hardscrabble depression years.

The twin revolutions of the Second Vatican Council and the cultural changes of the 1960s made these questions even more pressing. A partial list of the storms weathered by a hypothetical Fordham trustee between 1965 and 1980, some only touched on by Shelley, would include: yet another financial crisis, a bumpy start to co-education beginning in 1974, administrative turmoil including three Jesuit presidents in 10 years, efforts by a newly emboldened state government to make taxpayer-funded scholarship monies dependent on limiting the influence of “religion,” fierce curricular debates, a belated but still powerful student protest movement centered on opposition to the American military presence in Vietnam, the descent of the Bronx into an emblem of urban devastation and the cumulative effect of the departure of many Jesuits from the priesthood and a dizzying drop in new religious vocations.

It’s a wonder the place survived. And yet, buoyed by shrewd leadership and the resurgence in New York City’s fortunes, the place flourished. Shelley’s narrative ends in 2003, avoiding comment on the university’s current and longstanding president, Joseph M. McShane, S.J. But to read the last chapters is to conclude that the academic reputation of the university has never been higher. Fordham remains one of the largest universities in the nation’s largest city, with vibrant undergraduate and professional programs on two thriving campuses—the original campus at Rose Hill in the Bronx, near the New York Botanical Garden and the Bronx Zoo, and the Manhattan campus containing the School of Law and Fordham College at Lincoln Center.

Catholic identity questions endure, encased in the struggle of private universities to navigate high, fixed labor costs, a necessary slowdown in tuition increases and competition (demarcated in financial aid dollars) for students. As harrowing as these challenges are for Fordham’s leaders and their peers across the country, reading Shelley’s Fordham at least offers the comfort of even more formidable challenges overcome. Even the attacks of Sept. 11, 2001, may offer solace. This defining moment in contemporary New York’s history was, sadly, a defining moment for Fordham as well. A startling 39 Fordham graduates died at the World Trade Center. Memorials on both Fordham campuses pay tribute to their lives. And even these implicitly recognize, as does Shelley’s history, the university’s centrality not only to New York’s recent past but to its foreseeable future.

John T. McGreevy is the I. A. O’Shaughnessy dean of the College of Arts and Letters at the University of Notre Dame. He is the author, most recently, of American Jesuits and the World: How an Embattled Religious Order Made Modern Catholicism Global (Princeton University Press, 2016).