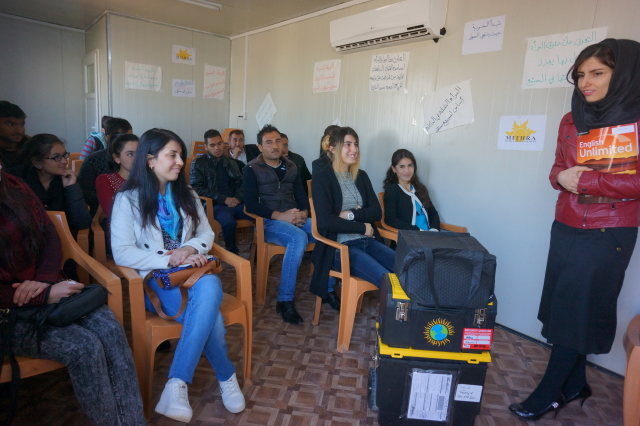 An English class in Khanke Camp in Dohuk, Iraq with Yazidis young people.

The final month of 2016 was a chance for new beginnings for refugees and displaced persons in Iraq eager to learn. Jesuit Worldwide Learning, a collaboration of universities, organizations and companies to provide higher education to people living on the margins, officially opened three learning centers in the country on Dec. 12.

Peter Balleis, S.J., J.W.L.’s executive president, said students gathered outside the schools before the first day, ready to learn new skills or improve their language skills, both of which can be invaluable for making a living in refugee camps.

“A lot of people want to improve their English,” he said. “This is the start.”

The learning centers were opened in Khanke and Domiz camps and the Catholic University of Erbil. Students can earn a diploma of liberal arts at Domiz and at the university. English courses are available at Domiz and Khanke. Balleis said more than 200 students are enrolled in courses between the three facilities. Some of the teachers are refugees from Syria, but most come from Iraqi cities near the camps, which serve both Syrian refugees and displaced Iraqis.

More than 5,000 young people from 25 countries have received education through J.W.L. since it was founded in 2010. Based in Geneva, Switzerland, J.W.L. has learning centers in Afghanistan, Chad, Jordan, Kenya, Malawi, Myanmar, Sri Lanka and the United States. These digital classrooms are often in refugee or displaced persons camps where access to internet or continuing an education is difficult.

A partner in the field to J.W.L., Jesuit Refugee Service has made a fundamental commitment to providing educational opportunities to refugees and displaced persons through its Global Education Initiative. J.R.S. has made an emphasis on continuing education for refugees because it gives them “the tools not only to contribute to their new communities, but also to rebuild their old ones.”

According to J.R.S., the fundamental right to education is often lost to refugees, who face a variety of barriers trying to access education, from overcrowding in schools to xenophobia in host communities. Among refugee children globally, only 36 percent go to secondary school and less than one percent have the opportunity to pursue a higher education. Jesuit Refugee Service uses its network to connect J.W.L. with groups in refugee camps to establish the learning centers.

Jesuit Worldwide Learning students earn a diploma of liberal arts through Regis University of Denver, Co. To complete the 45-credit diploma, students take 15 credits a year at a cost to J.W.L. of around $2,000 per student, Balleis said. More than 300 students participated in the diploma program in 2016. The majority of students who are not resettled to a different camp complete the diploma.

An additional 2,000 students were in a certificate program, which include topics such as community service, information technology and sustainable agriculture. The certificate programs are based on problems in the refugee and displaced persons’ community.

Jesuit Worldwide Learning partners with organizations such as the United Nations High Commissioner for Refugees, which provides facilities for the learning centers. Jesuit Refugee Services, where Father Balleis worked as international director from 2007 to 2015, helps J.W.L. find local organizations working in the camps to support the learning sites. Georgetown University contributed the infrastructure to provide courses online and allow students to interact.

Jesuit Worldwide Learning empowers students to become active in their communities. Instead of taking students away from friends and family to attend school, the education is brought to the communities, Balleis said.

“A lot of wars now are about education,” he said, referencing groups such as Boko Haram or the Taliban. “The places where there is a knowledge hole, where there’s no internet, the places where education is low, conflicts are high.

“We’re not going to stable places. We’re going to where [education] is needed.”

Wyatt Massey is a Joseph A. O'Hare fellow at America.

@News4Massmassey@americamedia.org
Show Comments (
1
)
Comments are automatically closed two weeks after an article's initial publication. See our comments policy for more.
Charles Erlinger
5 years 5 months ago
I can see this narrative becoming the first episode in a monthly series on the adventures of the JWL, both inspiring and full of action.