Should college be free for all? 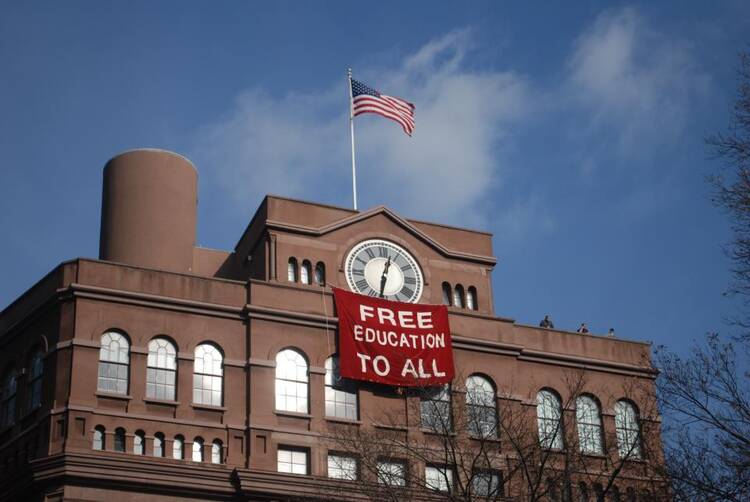 Students hung a banner from the Cooper Union Foundation Building during a December 2012 occupation.” (Wikicommons)

As the Democratic and Republican conventions loom on the horizon, higher education has not been a widely or deeply discussed issue. This is unfortunate. The economic security of the American people requires that each generation be educated to confront the social, environmental and technological challenges of our time and to appreciate the arts and literature, which nourish the personal and national soul.

This calls for greater access to a college or university education. U.S. leaders once hoped that by 2025, 60 percent of the population would be college-educated. So far it is closer to 30 percent. The curse of inequality continues to isolate the ruling elite from the common public. The average male high school dropout might earn $24,000 a year. One with a four-year college degree might make $52,000, while an advanced degree could merit $67,000. On a salary of $62,000 a family might enjoy a comfortable lifestyle; but the average college graduate moves into public life overburdened by college debts.

A college education today is not a luxury; for many careers it is a personal necessity as well as a social good. Senator Bernie Sanders has proposed that the government should guarantee tuition for every student in a public university, which is 75 percent of the student population. This would be paid for by a tax on Wall Street. Hillary Clinton’s plan would spend $350 million in states that increase their funding, tighten rules on for-profit colleges, have students work for 10 hours a week and allow families to pay according to their income. Her plan would also offer some help to private colleges with high numbers of needy students. Jeb Bush offered the student a $50,000 line of credit to be repaid through federal income taxes over 25 years. Marco Rubio would “fundamentally overhaul higher ed” and supports night school and online degree programs.

A variety of theories explain the rising college costs at public institutions as a recent phenomenon. Critics blame luxurious dormitories and athletic centers and high-salaried administrators and professors. In many cases state legislators have lowered funding year by year, forcing public universities to raise tuition. High tuition can also be falsely perceived as a sign of quality, leading wealthier students to enroll and middle-class strivers to sacrifice and follow.

Proponents of free tuition, at least for the lower middle class, point to Germany, Finland, Norway and Sweden, all of which offer a free college education. It is “free” because fewer students attend college in these countries than in the United States and because citizens are willing to pay much higher income taxes. In the United States, with 50 different state educational systems, California’s public colleges were free until 50 years ago; and Tennessee, Oregon and the city of Chicago have recently provided or will soon provide free tuition for two-year colleges.

Whatever its limitations, the Sanders program has started an important conversation and inspired other government leaders to propose alternatives. Some critics argue that a larger role for Washington in public education would build bureaucracy and stifle entrepreneurship. Others praise President Obama’s plan for the federal government to pay 75 percent of the tuition to public two-year colleges only if the states pick up the rest. This nudges the states to take up again their responsibility for public education.

Free education clearly has its advantages. Costs are spread across the population, and there are fewer financial risks for the individual. Meanwhile, shifting various current expenditures for higher education to direct student tuition support is more efficient; it becomes a collective investment rather than an individual one.

A million people signed a petition in support of the Student Loan Forgiveness Act in 2012. The hope is that this law would liberate the debtors to spend money, build the economy, get jobs and pay their taxes. An interesting proposal that goes beyond President Obama’s initiative and is more focused than Senator Sanders’s comes from the Campaign for Free College Tuition, which offers a full college scholarship at a public or private college to every academically qualified student whose family makes less than $180,000 a year.

What would be the impact of these proposals on Catholic and other private institutions? If the federal government, in fairness, can support needy students who could otherwise not afford Catholic schools, so much the better. But we should recall that traditionally there are two rationales for Catholic education. Unburdened by state control, they strive to achieve academic excellence alongside their secular rivals, but they also teach theology and philosophy and urge love for one’s neighbor and the importance of a more just society. Even in a competitive academic world where affordable education would be available to all, a Catholic education offers something unique. Catholic colleges have little to fear from a robust public education system and should see the overall benefits of an educated and engaged population.