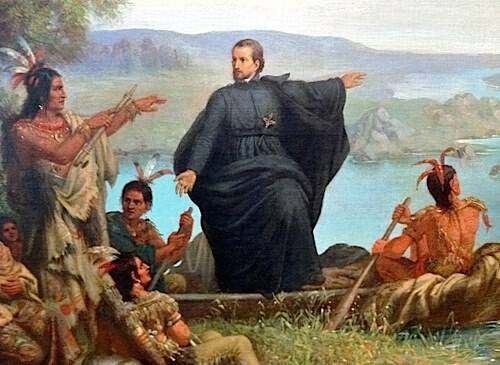 When Pope Leo XIII opened the Vatican archives to researchers in 1881, he quoted with approval the admonition of Cicero that the first duty of an historian is not to tell a lie and the second duty is not to be afraid to tell the truth. The late Kevin Starr, professor of history at the University of Southern California for many years and the author of numerous well-received studies of California history, follows that advice admirably in his ambitious study of the Spanish, French and English colonial roots of North American Catholicism. He writes in the grand narrative style of classic American historians like George Bancroft, Francis Parkman and Herbert Eugene Bolton. That approach leaves relatively little room for “history from below” but mercifully spares the reader from the tedious analysis of minutiae that makes some history books resemble history with the history left out.

Almost one half of the book is devoted to the Spanish contribution to the evangelization of North America. The author pays generous tribute to the heroic sacrifices of many of the missionaries, and the efforts of Dominican friars like Antonio de Montesinos and Bartolomé de las Casas to defend the Native Americans, but he candidly admits the complicity of churchmen in the economic, cultural and even sexual exploitation of the native population.

The often-praised bull of Pope Paul III in 1537 affirming the human dignity of the Indians was eviscerated the following year when the papacy eliminated the penalties in the bull at the insistence of the Spanish crown. According to Starr, in 18th-century California Indians who continued their aboriginal way of life in the wilderness had a better chance of survival than those who lived in the famed missions. It is no wonder that the first Latin American pope felt compelled to apologize to the indigenous peoples of the Americas for the mistreatment that their ancestors suffered at the hands of their Spanish conquerors, both lay and clerical. Starr calls it “their long genocidal agony.”

The author pays generous tribute to the heroic sacrifices of many of the missionaries.

Devotion to Our Lady of Guadalupe is a centerpiece of Hispanic Catholic devotion to Mary throughout the Americas. The American Vincentian Stafford Poole and other scholars ran the risk of provoking a Catholic fatwa some years ago when they examined critically the apparition narrative because of the lack of contemporary evidence, but none of these scholars questioned its significance. As Starr points out, the Indian-clad Virgin of Guadalupe offered “a bold counterstatement” to Mary as La Conquistadora. “Beneath the surface of history,” adds Starr perceptively, “the Guadalupe devotion represented an apology, a request for forgiveness and atonement” on the part of the descendants of the conquistadors.

As Starr points out, the Indian-clad Virgin of Guadalupe offered “a bold counterstatement” to Mary as La Conquistadora.

Starr gives well-deserved attention to the history of the short-lived French empire in North America, which survives today as a vibrant but heavily secularized francophone society in Québec, a French island in an English ocean. The story of France in colonial North America has forever been connected with the exploits of the Society of Jesus, thanks to their own exhaustive documentation of their efforts in TheJesuit Relations and the compelling tribute paid to them by Francis Parkman, a 19th-century Boston Brahmin, who overcame his innate prejudices to offer them his grudging admiration. The scope of the missionary endeavors of the Jesuits stretched from Acadia to Wisconsin and from Ontario to the Mississippi Valley. Between 1642 and 1649 no fewer than eight Jesuits died as martyrs, five in Canada and three in modern-day New York State. With pardonable exaggeration, George Bancroft claimed that in the history of French Canada, “not a cape was turned nor a river entered but a Jesuit led the way.”

The establishment of Ville-Marie de Montréal (the future city of Montréal) in 1642 was unique, since the major initiative came not from the French crown or hierarchy or any religious order but from the laity, specifically, the so-called dévots—pious, wealthy and politically well-connected French lay men and women in Catholic-Reformation France who envisioned Ville-Marie as a center for the evangelization of the native population. They were soon joined by priests of the recently founded Society of Saint Sulpice.

Another unusual feature of Catholicism in French Canada was the emergence of a new kind of woman religious in North America, not exclusively cloistered nuns, as in the Spanish Empire, but “activist” sisters who devoted themselves to teaching, nursing and missionary work. In future centuries their successors in numerous religious communities of this type throughout Canada and the United States were to make an incalculable contribution to the development of Catholicism in North America.

As related by Starr, some of the more extravagant features of 17th-century French piety appear to be an acquired taste that few 21st-century Catholics would care to acquire. A case in point is St. Mère Marie de l’Incarnation, a widow who became an Ursuline nun, leaving her 11-year-old son in the care of an aunt. The boy spent three days outside the convent walls begging her to return. Years later, from Québec City, where she became an iconic figure, she told him that her dearest wish was that he should suffer a martyr’s death.

More to Starr’s liking than the grim penitential piety of Mère Marie de l’Incarnation is the Christian humanist spirituality of the 18th-century French Jesuit savant, Père Pierre-François-Xavier de Charlevoix, an explorer, geographer and historian. Starr calls him a “Jesuit philosophe” because, in the age of the Enlightenment, he combined deep faith with massive erudition and wrote the first documentary history of Catholicism in French North America. This ephemeral French empire extended briefly from Acadia to the Gulf of Mexico; but within the confines of the present-day United States, most of it was an unsustainable paper trail of isolated settlements, except for New Orleans, the city where Starr concludes his fascinating study of French colonial America and where both France and Spain left a permanent imprint on English North America.

In his treatment of English Catholic North America, Starr graciously acknowledges his dependence on the publications of Robert Emmett Curran, especially his recent Papist Devils: Catholics in British North America, 1574-1783. Like Curran, Starr rightly gives pride of place to Maryland, the heartland of English-speaking Catholicism in North America and the only colony founded under Catholic auspices, a mere 14 years after the arrival of the Pilgrims at Plymouth. Although Catholics never constituted more than 10 percent of the population, some of the wealthiest landowners were Catholics. As a result, in Maryland “property protected popery” and Catholics were never deprived of the ownership of the estates that were the source of their wealth during the religious persecution they suffered during much of the 18th century.

Ironically, the colony where Catholics enjoyed the longest period of sustained religious toleration was not Maryland but Pennsylvania, where the Quakers set new standards of religious toleration, because they not only wanted freedom of conscience for themselves but were willing to grant it to others. Colonial Pennsylvania was also a harbinger of two of the most prominent features of 19th-century American Catholicism. Philadelphia became the first center of an urban American Catholic community, and the influx of German immigrants into southeastern Pennsylvania served as an announcement that American Catholicism was to be a multiethnic community. Starr appropriately concludes his book with the return of Father John Carroll from England to Maryland on the eve of the American Revolution, which was to usher in a new era not only in the history of the American people, but also a new era in the life of John Carroll and the history of the Catholic Church in North America.

Starr’s comprehensive survey of colonial North American Catholicism has many strengths, not the least of which is his ability to combine impressive research with meticulous attention to detail and an engaging literary style. Ignatius Press is to be congratulated for producing a strikingly handsome book that includes numerous maps, dozens of color illustrations and a select bibliography as well as an extensive essay on sources and a comprehensive index. It should have a wide appeal. Kevin Starr was preparing a second volume at the time of his untimely death on Jan. 14, 2017.

Msgr. Thomas J. Shelley, a priest of the archdiocese of New York, is professor emeritus of church history at Fordham University.