The dawning of America's imperial ambitions 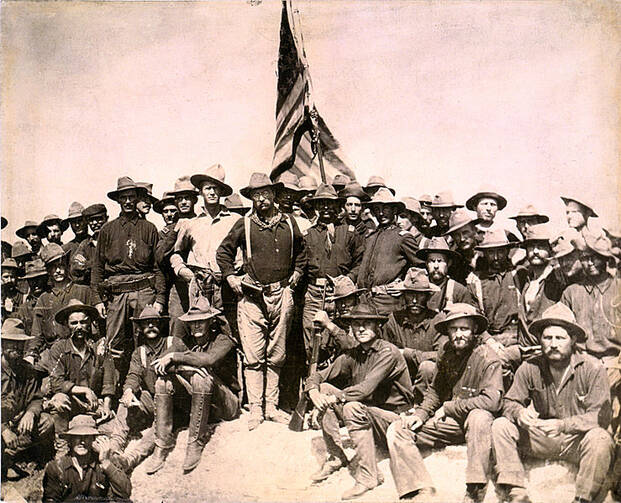 Colonel Roosevelt and his Rough Riders at the top of the hill which they captured, Battle of San Juan (photo: Library of Congress).

In the nineteenth century, Great Britain, France and Germany acquired colonies to flaunt their status as great powers. As the century drew to a close, the United States was poised to join their ranks, having defeated Spain and being on the verge of acquiring Cuba, the Philippines and Puerto Rico.

The debate that followed, Stephen Kinzer writes, was “arguably even more momentous than the debate over slavery.” Leading those who believed it was America’s destiny to acquire an empire were Senator Henry Cabot Lodge of Massachusetts and Theodore Roosevelt, a newly minted war hero. Intimate friends and political partners, the two advocated a global strategy of overseas markets secured by a powerful navy. Although America was at peace during the 1890s, Roosevelt wrote in 1895 that he “would welcome any war, for I think this country needs one.” Within three years, pushed by inflammatory reporting by William Randolph Hearst’s New York Journal, the country was consumed by war fever against Spain.The “splendid little war,” lasting only ten weeks, fulfilled the expansionists’ dreams of new colonies.

Opposed to the acquisition of colonies was the Anti-Imperialist League, led by Andrew Carnegie, William Jennings Bryan, Mark Twain, Carl Schurz and two former presidents. The League believed that the United States should allow foreign peoples to govern themselves. Carnegie and Twain supported the war with Spain in the hope that it would liberate the Cuban people from colonial rule. Their hopes were soon dashed, however. In 1901, Congress adopted the Platt Amendment, which became the template by which the United States dominated countries that it did not formally annex, especially in Latin America. Instead of granting Cubans their independence outright, the legislation stipulated that the United States would “exercise the right to intervene for the preservation of Cuban independence.” The interventionists won other victories. In a political fight that lasted six years, they won every major vote in Congress, soundly defeated the League at the polls and dominated foreign policy for the rest of the 20th century.

Kinzer singles out Bryan for special blame. Bryan miscalculated that supporting the treaty annexing the Philippines would induce President William McKinley to more quickly grant independence. Without Bryan’s opposition, the treaty was approved by only two votes, and McKinley delayed independence indefinitely.

Denied independence, the Filipinos rebelled against the American military. A war that lasted 41 months killed more Filipinos than three and a half centuries of Spanish rule. Americans practiced water torture, killed civilians, burned villages and slaughtered farm animals to crush an insurgent rebellion. By the time Roosevelt won the presidency in his own right in 1904, the rebellion was crushed.

Kinzer believes that the peace movement might have succeeded, and the Philippine War avoided, had Bryan not endorsed a free silver platform at the 1900 Democratic convention. The League hoped to make the 1900 presidential election a referendum on McKinley’s expansionist policies. Bryan’s continuing embrace of free silver alienated many anti-silver voters who would have supported Bryan’s anti-imperialist agenda. Kinzer writes, with perhaps some exaggeration, that no decision by a presidential candidate at a party convention ever shaped American history more profoundly. More likely, however, had Bryan acted otherwise, he would have lost the support of free silver voters, to whom he owed his political career.

Kinzer’s treatment of Roosevelt also demands greater depth. The hero of San Juan Hill was elected governor of New York in 1898 and vice president in 1900. Ascending to the presidency when McKinley was assassinated in 1901, Roosevelt comes across as a one-dimensional figure who celebrated war and “the essential manliness of the American character.” Missing from the portrait is Roosevelt’s leadership of the progressive movement, including his fight against political corruption, his protection of the environment and his challenge to corporate trusts. Although Kinzer acknowledges that Roosevelt lost his appetite for expansion after the Philippine War ended, he does not explain why Roosevelt turned his attention to domestic policy or attempt to analyze the relationship between progressivism and imperialism.

Drawing from speeches, letters and newspaper articles, Kinzer’s account of the debate is more reporting than history. His use of long block quotes on almost every page clogs the narrative. However, his sources give the story an immediacy often lacking in conventional historical accounts. Drawing from Mark Twain’s writing is particularly effective. Twain, who lived in Europe from 1891 until 1900, was a late-comer to the debate. But the power of his writing made up for his absence during a crucial time. For example, Twain defended the Filipino rebels as “not worse than were our Christian Ku-Klux gangs of a former time, nor than are our church-going negro-burners of today.”

The urge of the United States to intervene reflects a deep ambivalence, Kinzer believes. On the one hand, Americans believe that nations should decide their own destinies. On the other, Americans see themselves as the indispensable nation unique in its capacity to change the world for good. McKinley exemplifies this conflict. Initially opposed to war and acquisition of territory, he saw a vision, after prayer, that the United States must “uplift and civilize and Christianize” the Filipinos. Kinzer documents, however, how these best of intentions made things worse.

This article also appeared in print, under the headline “The dawning of America's imperial ambitions,” in the March 20, 2017, issue.