Who should get the Covid vaccine first? Our answer must not neglect the poor and marginalized. 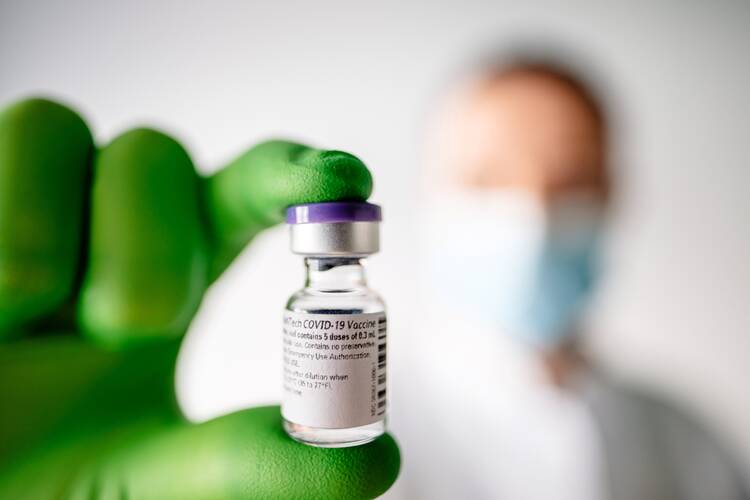 A vial of the COVID-19 vaccination of BioNTech and Pfizer. Britain authorized a COVID-19 vaccine for use Dec. 2, greenlighting the first shot backed up by rigorous scientific review. (CNS photo/BioNTech SE 2020 handout via Reuters)

Encouraging news reports beginning in October brought the welcome prospect of an effective vaccine (or several) for Covid-19 in the coming year. For a nation and a world grown weary from almost a year of a pandemic that has killed millions across the globe and altered the life of almost every person on the planet, any news of the possibility of relief and a return to some degree of normalcy is a leaven for the spirit.

It will be impossible to provide everyone with a vaccine at once, so any program of inoculation will have to be informed by a carefully considered system for distributing the vaccine in the most effective and just manner possible. For that reason, it is crucial that all government agencies work through the ethical conundrums of vaccine distribution beforehand—and be prepared to make hard decisions.

Within the United States, one challenge will be to make sure receiving a vaccine does not become a privilege for wealthy individuals rather than a right for all.

Within the United States, one challenge will be to make sure receiving a vaccine does not become a privilege for wealthy individuals rather than a right for all. While many insurers cover Covid-19 tests, the early days of the pandemic saw a severe shortage of testing centers and available clinicians—except for those who had the financial wherewithal to visit someone who would administer a test for a significantly increased price. Many also saw price-gouging providers charge their insurers thousands of dollars for a nasal swab test that is commonly estimated to cost less than $50 to administer and process. In a time of significant social unrest over issues of racism and civil rights violations, it was but one more glaring example of unjust social structures. It would be even more egregious if the same occurs with a Covid-19 vaccine, where millions wait impatiently for medical relief while the wealthy simply buy their way to health.

It will also be necessary to allocate the vaccine according to need and effectiveness as the primary criteria. While a random selection process might seem the most fair, it does not take into account the significant differences in levels of risk and exposure—as well as the importance of keeping first responders and medical personnel healthy, not just for their sake but for the sake of the vulnerable populations they serve. The World Health Organization has already made its position clear that “once a novel vaccine is found to be safe and effective, to prioritize those at highest risk, as well as populations like health care workers who may be more likely to serve as vectors for transmission, is justified.”

Once our frontline workers and medical personnel are accommodated, teachers and other educational support staff seem to be the next natural choice: They are at high risk, and they are essential to the crucial task of getting students back into situations of face-to-face learning.

We should be wary of applying too utilitarian a calculus to the distribution of a vaccine.

But after those populations are inoculated, the ethical questions become thornier. Who should receive the vaccine next? Those most at risk? Or those with the best expected outcomes—that is, those without comorbidities and with the greatest chance of thriving? We should be wary of applying too utilitarian a calculus to the distribution of a vaccine. Approaches that prioritize helping those who will contribute the most as healthy adults tread dangerously close to what Pope Francis calls the “throwaway culture,” in which the elderly, sick, disabled and marginalized are treated as less deserving of their human rights than the healthy, the wealthy and the well-connected.

Another reason for working out these ethical principles in advance is that some of the choices to be made will be unpopular. For example, Covid-19 infections are rampant among the 2.3 million people incarcerated in the United States. In the event that prisoners are put near the head of the line for a vaccine, there could be a backlash from the general public—but should people be deprived of their basic right to health care simply because they are incarcerated? Others at extreme risk are the tens of thousands of undocumented migrants and asylum seekers held in jails and detention centers by U.S. Immigration and Customs Enforcement.

Would it be ethically acceptable to require employees or customers to show they have been inoculated?

Finally, we come to the question of how to convince large swaths of the public to take the vaccines at all. It is unlikely that the federal or state governments would try to mandate vaccination (though the Supreme Court ruled in 1905 that it was not a violation of the Constitution to do so), but smaller units of society—schools, hospitals, nursing homes, service industry employers—may find themselves in the awkward position of trying to coerce vaccination to protect their own employees and customers. Sentiment against any kind of vaccine, not just for the one that targets the coronavirus, is fairly common.

Some Americans are skeptical about taking a Covid vaccine. Could religious leaders convince them?
Michael J. O’Loughlin

In some cases, this resistance is the result of mistrust because of past harms suffered by minority groups in the name of science (including the infamous Tuskegee Study). Others have questioned the ethics of using vaccines derived from aborted fetal tissue (though the U.S. bishops have declared that it is licit to accept such vaccines). Transparency on the benefits and limits of vaccines is essential to gain social trust. Unfortunately, President Trump, with his denials of the severity of the pandemic and his repeated attempts to undermine the W.H.O. and the Centers for Disease Control, has further eroded social trust in science by politicizing it.

A Gallup poll from August found that 35 percent of Americans would refuse to accept even a free, F.D.A.-approved vaccine. Would it be ethically acceptable to require employees or customers to show they have been inoculated? Or is the ethical response to respect their personal autonomy? In the case of health care, when does the common good trump individual rights?

Such questions might sound vexing now but are still relatively abstract. They will become seriously troublesome if we enter a period of mass vaccinations without having thought through their consequences.