Read: An exclusive essay by Pope Francis on a ‘personal Covid,’ his exile in Argentina 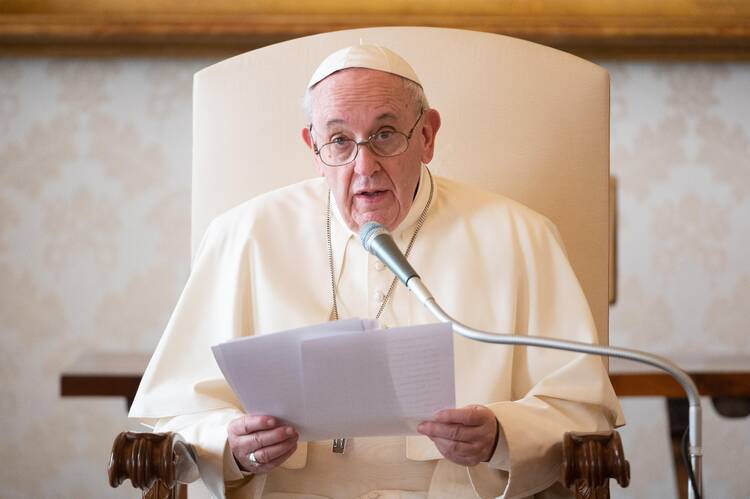 Pope Francis leads his general audience in the library of the Apostolic Palace at the Vatican Nov. 25, 2020. (CNS photo/Vatican Media)

In his new book, “Let Us Dream,” Pope Francis describes his three “personal Covids”: times in his life when circumstances have forced him to stop, reflect and, sometimes, change course. With encouragement from his collaborator and biographer Austen Ivereigh, the pope disclosed how, after a life-threatening bout of pneumonia led to the removal of part of one lung, he came to understand his dependence on others. This was his first personal Covid. The second came when the Jesuits transferred him to Frankfurt, Germany, in 1986 to improve his German and do research. The pope describes feeling uprooted and homesick, occasionally walking to a nearby cemetery to watch planes arrive and take off, “pining for my homeland.”

What follows is an excerpt from the book describing Francis’ third Covid—what biographers have called his exile in Cordoba following his controversial leadership of the Argentine Jesuits (1973-79) during that country’s “Dirty War.”

Córdoba was a kind of lockdown, self-isolating as so many of us have done lately, and it did me good.

Sometimes uprooting can be a healing or a radical makeover. That was my third Covid, when I was sent to Córdoba between 1990 and 1992. This time had its roots in my way of exercising leadership, as provincial and then rector. I’m sure I did a few good things, but I could be very harsh. In Córdoba they made me pay, and they were right to do so.

I spent a year, 10 months, and 13 days in the Jesuit residence there. I celebrated Mass, heard confessions and gave spiritual direction but hardly ever left the house, just to go to the post office. It was a kind of lockdown, self-isolating as so many of us have done lately, and it did me good. It helped me to develop ideas: I wrote and prayed a lot.

In Córdoba they made me pay, and they were right to do so.

Until then I had led an ordered existence in the Society of Jesus based on my experience of leadership, first as novice master and then, from 1973, when I was named provincial, through to 1986, when I ended my term as rector. I was settled into that way of life. So an uprooting of that kind, when they send you off the soccer field and put you on the bench, turns everything around. Your habits, your reflexive behaviors, the reference points of your existence that take shape over time—all these get turned on their head, and you have to learn to live life anew, to take up arms again.

Looking back now, I’m struck by three things in particular. First, the capacity for prayer I was given. Second, the temptations I experienced. And third—weirdest of all—why it occurred to me to read all 37 volumes of Ludwig Pastor’s History of the Popes. I could have read a novel, or something more interesting. But from where I am now I can’t help wondering why God inspired me to read them. It was as if the Lord was preparing me with a vaccine. Once you know that papal history, there’s not much that goes on in the Vatican curia and the Church today that can shock you. It’s been a lot of use to me!

What I learned was that you suffer a lot, but if you allow it to change you, you come out better.

The Covid of Córdoba was a real purification. It gave me greater tolerance, understanding, the ability to forgive, and a fresh empathy for the powerless. And patience: a lot of patience, which is the gift of understanding that important things need time, that change is organic, that there are limits and we have to work within them while keeping our eyes on the horizon, as Jesus did. I learned the importance of seeing the big in little things, and attending to the little in big things. It was a period of growth in many ways, the kind of new growth that happens after a harsh pruning.

But I must still be vigilant, because when you fall into certain defects, into particular patterns of sinfulness, and you correct yourself, the devil comes, as Jesus says, and, finding the house “swept and put in order” (Luke 11:25), sends seven other spirits even worse. This man’s end, says Jesus, is a lot worse than his beginning. That’s what I must guard against in my work of governing the church, that I don’t fall back into the defects I had when I was a religious superior. This “second tempting” is the speciality of polite demons.

When Jesus says the devil sends seven demons worse than him, he says they “enter and live there.” In other words, we let them in. They ring the bell, they’re courteous, they say “Excuse me” and “May I?” but they take over the house just the same. It’s the temptation of the devil in the guise of an angel of light that Jesus shows us in these passages.

The devil’s return in the form of temptation is a long tradition in the church. Think of the temptations of Saint Anthony, for example, or Saint Thérèse of Lisieux asking to have holy water thrown over her because the devil is surrounding her, hoping she’ll trip up eventually. At my age, I should have special glasses to see when the devil is surrounding me, hoping I’ll trip up at the end, because that’s where I am: I’m at the end of my life.

These were my main personal Covids. What I learned was that you suffer a lot, but if you allow it to change you, you come out better. But if you dig in, you come out worse.

This excerpt is adapted from Let Us Dream by Pope Francis. Copyright © 2020 by Austen Ivereigh. Reprinted by permission of Simon & Schuster, Inc. All rights reserved.