Some Americans are skeptical about taking a Covid vaccine. Could religious leaders convince them? 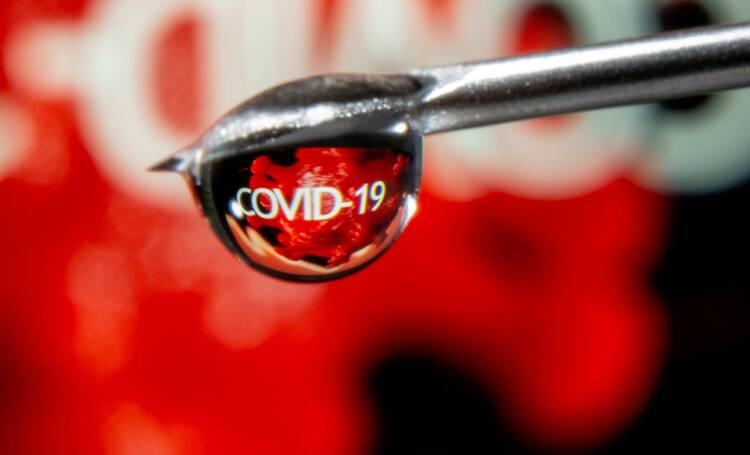 The word "COVID-19" is reflected in a vaccine drop that dangles from a syringe needle in this illustration photo Nov. 9, 2020. (CNS photo/Dado Ruvic, Reuters)

As U.S. regulators prepare to approve at least two highly effective Covid-19 vaccines, questions remain about who will be given priority access, how the drugs will be distributed and, to the distress of some public health officials, whether enough of the population will be willing to take a vaccine. One group of people who could help encourage vaccination is faith leaders, who have the ability to reach communities that might otherwise be skeptical.

“The vital role of religious leaders is going to be the framing and meaning of protecting oneself and protecting others,” Mimi Kiser, a senior program director at the Interfaith Health Program at Emory University, told America. “It’s going to be a bigger and similar job to the mask challenge.”

While most Americans appear willing to get vaccinated against Covid-19, there is still resistance, including from some Catholic leaders. Earlier this year, two Catholic bishops published misinformation about the origin of two vaccines, created by Pfizer and Moderna, claiming that Catholics should not take the vaccines because they were created using fetal stem cells acquired through abortion. That led the U.S. Conference of Catholic Bishops to distribute a memo to all U.S. bishops reiterating church teaching around vaccines and stating Catholics should have no moral qualms about using the two vaccines in question.

John Blevins, the director of the Interfaith Health Program, told America that it is helpful for religious leaders to correct misinformation about vaccines, especially when they are addressing people of the same faith tradition, but that more is needed.

“I think there will be people who will opt not to take the vaccine because they’ve heard a message like the ones that the [two] bishops erroneously put out, and even a correction by other authorities, either public health or ecclesial authorities, won’t be sufficient, necessarily to change everyone’s mind,” he said.

More recently, a number of statements from Catholic leaders have encouraged the use of the vaccine. Bishops in the United Kingdom and Canada released supportive statements, as did groups of bishops in Texas and California.

Public health experts said that faith leaders can leverage the trust of their congregations when it comes to encouraging the use of vaccines.

“The Pfizer and Moderna vaccines promote health in face of a devastating pandemic that no one expected. We want to reemphasize that the origins of the vaccines are morally acceptable from a Catholic perspective and their advancement fosters the common good,” reads a statement from the California Catholic Conference. “We also affirm that those who are most vulnerable must have a privileged place in their distribution and allocation.”

Public health experts said that faith leaders can leverage the trust of their congregations when it comes to encouraging the use of vaccines, especially in communities of color that have been subjected to historical abuses in the public health system.

Dr. Julie Morita, a member of President-elect Biden’s Covid response team, speaking to America in her personal capacity, said that during her time helping to lead Chicago’s public health office, she worked with faith leaders in the African-American community to help overcome distrust and hesitancy about getting the flu vaccine.

“Communities really wanted to hear from some of their trusted messengers and trusted sources in the community,” said Dr. Julie Morita.

“Communities really wanted to hear from some of their trusted messengers and trusted sources in the community,” said Dr. Morita, who is also an executive vice president at the Robert Wood Johnson Foundation. “We found within our African-American communities, many of them really have put a lot of confidence and trust in their religious leaders.”

So the city not only worked with faith leaders to offer flu shot clinics at churches but provided public health resources to faith leaders and in some instances, even encouraged them to be vaccinated in front of their congregations.

“With the Covid vaccine, we’re hearing about fairly high rates [of] vaccine hesitancy and sincere questions about the safety and efficacy of vaccines, and it’s not limited to communities of color,” Dr. Morita said. If federal agencies approve the vaccines, which could happen in the next couple of weeks, she added, public health officials can confidently explain that they are safe and effective, and faith leaders may play a role in helping get the word out.

“It really has to be a comprehensive type of an approach, where health care providers are given the information that they need to be confident in the vaccine, that we have community and faith leaders who get information and understand what the questions and concerns are in their communities so that they’re equipped to answer the question and feel confident themselves and [are] getting the vaccine and also recommending the vaccine,” she said.

“It really has to be a comprehensive type of an approach, where health care providers are given the information that they need to be confident in the vaccine.”

Faith leaders have helped spread the word about other public health crises in the past, including in 2009, when the Department of Health and Human Services and the Centers for Disease Control and Prevention partnered with Interfaith Health Project and 10 faith-based organizations to promote the flu vaccine during the H1N1 pandemic. Faith leaders at the sites encouraged people to get vaccinated and some even worked with local health clinics to offer vaccines in places of worship.

Mr. Blevins said around the world, some religious leaders have played an important role in helping reduce stigma around H.I.V. and AIDS, either by preaching tolerance or getting tested in a public way. Similar efforts around the Covid-19 vaccination could be helpful in reaching communities who may be skeptical about vaccines.

“It’s really important that public health leaders try not to just use religious communities and religious leaders to unilaterally disseminate the messages they want to disseminate,” he said.

Instead, they should collaborate with faith leaders to disperse public health messages “in such a way that religious leaders, faith communities and people of faith can both receive those messages and repeat those messages, while being comfortable that they align with their own religious teachings and perspectives.”

Some Catholic leaders regularly promote the flu vaccine, efforts that were present again in 2020. Parishes in Indiana, Michigan and Oklahoma offered flu shots, and earlier this year, Cardinal Blase Cupich and the Archdiocese of Chicago released a video showing Cardinal Cupich receiving a flu shot.

“Nobody likes getting shots. I certainly don’t, but I got mine this month. Getting a flu shot is easy and inexpensive and it is recommended for just about everyone, even children over the age of six months,” Cardinal Cupich wrote in a letter as part of the campaign. It is possible that similar campaigns could come for the Covid vaccine.

Catholic hospitals will likely be part of a vaccine distribution program, especially in underserved areas.

But as for the distribution of those vaccines, it is unclear if local faith communities will be able to play a significant role. Because the vaccines require intense refrigeration, they may not be as easily distributed as flu vaccines. Catholic hospitals, however, will likely be part of a vaccine distribution program, especially in underserved areas. Last month, Mary Haddad, R.S.M., the president and C.E.O. of the Catholic Health Association, urged Catholic hospitals to distribute Covid vaccines.

“C.H.A. applauds the work of the scientists who have developed these vaccines in a manner consistent with human dignity and will work to support efforts to educate the public about the importance of getting vaccinated,” Sister Haddad said.

Even if the distribution is logistically tricky, Ms. Kiser said faith communities, with their commitments to serving vulnerable populations, could play a support role when vaccines become widely available, perhaps sometime next year. For people who lack access to transportation, whether in cities or rural areas, faith communities might be able to organize volunteers to provide rides to vaccination sites, she said. Plus there will be opportunities to make sure everyone who needs a vaccine is aware of how to get one.

“Elderly people with chronic conditions who are at risk, parishes should be really tracking those people and making sure they have a way to get vaccinated,” she said.