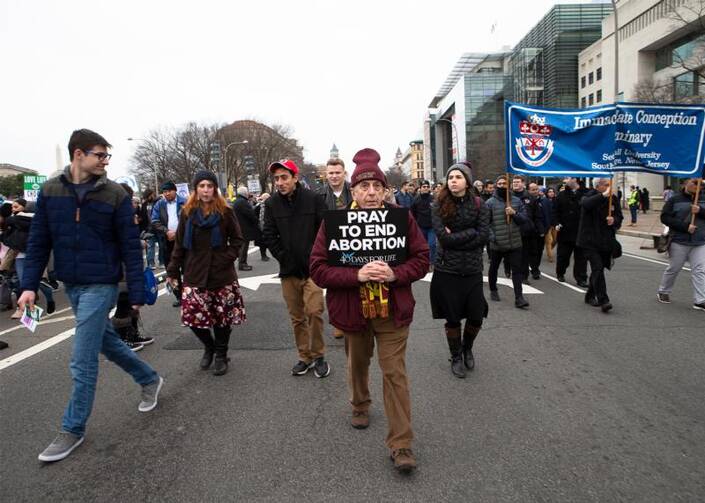 People walk up Constitution Avenue headed toward the U.S. Supreme Court while participating in the 47th annual March for Life in Washington Jan. 24, 2020. (CNS photo/Tyler Orsburn)

CLEVELAND (CNS) -- Americans participating in a study of attitudes toward abortion said they do not typically discuss it, find the labels "pro-life" and "pro-choice" inadequate, and generally do not consider abortion a "desirable good" for society, according to a University of Notre Dame study.

The study also reported that participants believe abortion is intimately personal rather than a political issue as often portrayed in public discussions.

The findings emerged in a report released July 15 by the Indiana Catholic university. A research team led by sociologist Tricia Bruce, who is affiliated with the university's Center for the Study of Religion and Society, also found the participants had never been asked about nor been listened to regarding their views on abortion.

Bruce said in a news release from the university that the study was designed to gather information from participants in interviews that lasted an average of 75 minutes. Overall, 217 people, described as "ordinary Americans," were interviewed from March through August 2019 in an effort to assess their attitudes toward abortion.

People from six states -- California, Colorado, Indiana, North Dakota, Pennsylvania and Tennessee -- were chosen for the interviews, representing political and demographic characteristics of the overall U.S. adult population, according to the researchers.

Sponsored by Notre Dame's McGrath Institute for Church Life, the study included 118 women and 99 men; 54% were college educated; 53% were married; 68% were white, while 14% were African American, 10% Hispanic and 2% Asian.

Weekly churchgoers made up 27% of the respondents and 35% attended less than once a year or never. The remaining 38% varied between going to church once or twice a year to nearly every week. The religious breakdown shows that 41% of interviewees were Protestant, 21% were Catholic, 4% were Jewish, 7% had another religious affiliation and 27% had no connection to religion.

The interviews were recorded and then transcribed and tabulated, giving the researchers an opportunity to let the voices of respondents be more fully heard.

Bruce said her team wanted to learn what ordinary Americans thought about abortion, explaining that most interview studies focus on social activists, people with personal experiences of abortion and members of "particular religious traditions."

The study went beyond the numbers to understand why people felt the way they did. The researchers found that people were influenced in their views by abortion experience, parenthood, facts, religion and politics.

Narratives from participants make up a significant amount of the report, allowing interviewees to offer the reasons for their perspectives.

The study found that Americans "don't talk much about abortion." Participants told the researchers they were often wary to do so for the study, but appreciated the opportunity to respond.

"The silence surrounding abortion is a partial consequence of the shouting that surrounds it publicly," the report said. "Interviewees express fear that talking will incite conflict, despite the promises so many articulate not to 'judge' another."

The report also said the interviews revealed that "most Americans have not given careful thought to abortion, beyond how labels, politics and media frame public conversations about it."

The researchers determined abortion attitudes are more complex than most surveys suggest. They also learned that people would welcome discussions about abortion "away from the shouting" widely experienced in American culture.

"Americans can talk about abortion under the right conditions," the researchers wrote. "They are more inclined to enter conversations than debates, and would benefit from expanded education in science, law and moral reasoning."

Another finding revealed that none of the people interviewed considered abortion as desirable. While views ranged from a preference for abortion to be available to its justification and need, "Americans do not uphold abortion as a happy event, or something they want more of," the study said.

Respondents said they wanted to see ways to "prevent, reduce and eliminate potentially difficult or unexpected circumstances" that can lead a woman to seek an abortion.

"Americans -- by and large -- do not approach abortion with callousness, but with sensitivity and a recognition that it is a tough issue," the study said.