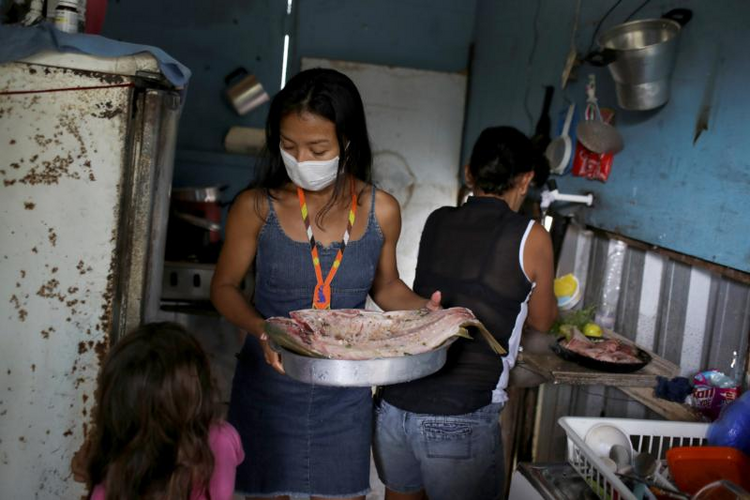 Vanderlecia Ortega dos Santos is seen with her family in their kitchen in Manaus, Brazil, May 7, 2020. Santos is a nurse who has volunteered to provide the only frontline care protecting her indigenous community of 700 families during the COVID-19 pandemic. (CNS photo/Bruno Kelly, Reuters)

LIMA, Peru (CNS) -- Catholic leaders warn that as the coronavirus pandemic spreads into the Amazon basin, the region may face a "humanitarian and environmental tragedy."

Indigenous people who suffer violence for their efforts to defend their land against miners, loggers and land-grabbers are also at great risk from COVID-19, according to a statement from the Pan-Amazonian Church Network. The statement was signed by Brazilian Cardinal Claudio Hummes, Peruvian Cardinal Pedro Barreto Jimeno and Mauricio Lopez, executive secretary of REPAM, as the church network is known.

"The pain and lament of the people and the earth join in a single cry," they wrote in the statement, dated May 18.

Throughout the Amazon, more than 30 indigenous groups have reported more than 500 COVID-19 cases and more than 100 deaths, according to REPAM. The figures could be much higher because of unreported cases and deaths in Amazonian cities like Manaus, Brazil, and Iquitos, Peru, where health care systems are overwhelmed.

In Bolivia, indigenous people decry "the government's lack of coordination and consultation" in addressing the pandemic, especially in ensuring that information is available in people's native languages, the REPAM statement said.

Colombia's bishops noted that indigenous people, those of African descent and peasant farmers face particular risk from the virus "because they were already living in a situation of structural poverty, with food insecurity and malnutrition, without access to health care and safe drinking water."

Throughout the region, millions of people live from day to day on what they earn as street vendors or day laborers. In Peru, when the government imposed mandatory quarantines, those people have been unable to work, and many have run out of food or been evicted from rented homes.

We’re all tied to the Amazon through globalization. Can the synod help us listen to its cry?
Vincent J. Miller

I was at the Amazon synod. Here are its 3 significant lessons (and challenges) for the church
Mauricio López Oropeza

Among them are indigenous people who migrated from their Amazonian communities to cities in search of work. Peru's bishops have called for the government to help those people, who are "completely unprotected."

Although the pandemic has slowed the economies of Amazonian countries, environmental destruction from deforestation, illegal mining and other activities continues, according to the REPAM statement.

An oil spill in Ecuador April 7 affected tens of thousands of people living along the Coca and Napo rivers, the statement says.

In Brazil, legislators allied with large landholders are considering legislation that would undermine the land rights of indigenous people and traditional communities "and favor land-grabbing, deforestation and predatory companies, legalizing illegal occupation for mining and industrial agriculture on indigenous lands," the REPAM statement said.

Conflicts over land rights and environmental harm have led to an "alarming increase of violence in rural areas," said the Brazilian bishops' Pastoral Land Commission. Four out of five murders in land conflicts last year occurred in the Amazon region.

"The care of people and the care of ecosystems are inseparable," the REPAM statement said, quoting from "Beloved Amazonia," the papal exhortation issued by Pope Francis after the 2019 Synod of Bishops for the Amazon.

The Amazonian church leaders urged "all people of goodwill" worldwide to "join forces in defense of 'beloved Amazonia, in all its splendor, its drama and its mystery.'"

Provide feedback on this article
Join the conversation: Login or create an account
Before you can comment, you need to update your profile to include your first and last name, as required in our comments policy. Then reload this page and you'll be set up for commenting. Update your profile
Advertisement
More: Coronavirus / Synod on the Amazon / Latin America / Poverty / Humanitarian Aid