We’re all tied to the Amazon through globalization. Can the synod help us listen to its cry? 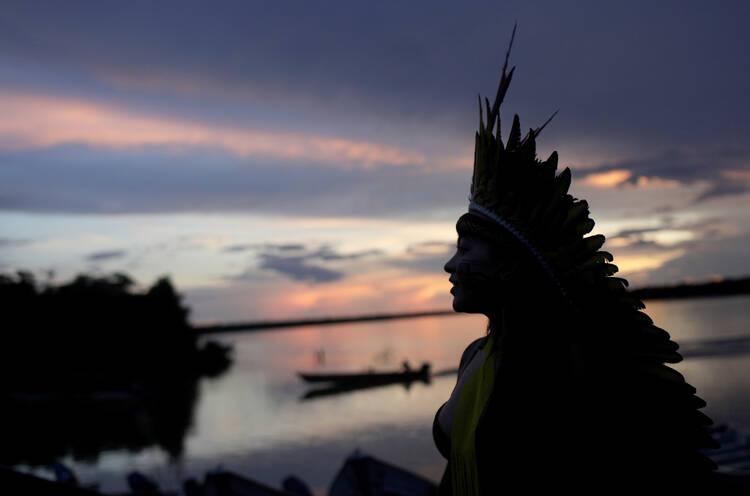 A leader of the Celia Xakriaba peoples walks along the banks of the Xingu River, a tributary of the Amazon, in Brazil’s Xingu Indigenous Park on Jan. 15, 2020. (CNS photo/Ricardo Moraes, Reuters)

Media coverage of the apostolic exhortation “Querida Amazonia” has focused on whether Pope Francis would authorize the ordination of married men in remote indigenous communities. The broader purpose of the Synod of Bishops for the Pan-Amazonian Region has been largely overlooked. Reflecting on this coverage, the executive secretary of the Pan-Amazon Church Network (Repam), Mauricio López Oropeza, wrote that it was afflicted by “disconnection, self-affirmation, Eurocentrism, incomprehension [and] incompatibility” regarding the concerns of the peoples of the Amazon.

In some ways this narrow reaction to “Querida Amazonia” helps us think about the broader church’s role in the reception of the synod itself. There is much more at stake here than reading a document. Francis describes a synodal church as “a church which listens.” The synod made hundreds of proposals, few of which were addressed by this document. Beyond evaluating the pope’s response, how are we called to engage this first synod organized around an ecosystem and its inhabitants? What does it mean for us, in the words of the synod’s final document, to listen to “the Holy Spirit in the cry of the wounded land and its inhabitants”?

“Querida Amazonia” conveys the suffering of the Amazon and its peoples in stark terms: “The land has blood, and it is bleeding.”

“Querida Amazonia” conveys the suffering of the Amazon and its peoples in stark terms: “The land has blood, and it is bleeding; the multinationals have cut the veins of our mother Earth” (No. 52). It also quotes the Colombian poet Juan Carlos Galeano’s haunting lines: “The river is a thin vein on the face of the earth.../ The river is a cord enclosing animals and trees./ If pulled too tight, the river could burst./ It could burst and spatter our faces with water and blood” (No. 58).

We are certainly, if unknowingly, spattered with its blood. There is the miles-wide wound of the Carajás Mine in the middle of the Amazon—the largest open-pit iron mine in the world—and the more than one thousand square miles of drowned land behind the Tucuruí hydroelectric dam, which powers the mine’s operations. Thousands of indigenous peoples were driven from this land to build the dam. Once the ore is mined, more than 500 square miles of Amazon forest is felled each year, often by slave labor, for charcoal to refine it into iron and steel. That steel is exported to make everything from cars to hospital beds.

I was at the Amazon synod. Here are its 3 significant lessons (and challenges) for the church
Mauricio López Oropeza

There are also the blood-red fruits of massive oil palm plantations that replace the living Amazon with “green deserts” of monoculture. We partake of their oil in countless manufactured foods and anoint ourselves with it in myriad shampoos, lotions and cosmetics. Even our efforts to change to more sustainable diets are enmeshed in the destruction: More than one third of the world’s soy is grown in massive farms in arid fields where the rainforest and its peoples once thrived.

Our listening, or failure to listen, is not from a distance. The multinationals denounced for cutting her veins feed us. The problem is not an easily denounced “throwaway culture” of consumer excess, but a global economy founded on extraction and export agriculture. The colonialism denounced in the synod lives on in the global economic system in which our lives are entwined.

“Querida Amazonia” offers a profoundly rich development of the church’s theology of solidarity:

Christ redeemed the whole person, and he wishes to restore in each of us the capacity to enter into relationship with others. The Gospel proposes the divine charity welling up in the heart of Christ and generating a pursuit of justice that is at once a hymn of fraternity and of solidarity, an impetus to the culture of encounter. The wisdom of the way of life of the original peoples—for all its limitations—encourages us to deepen this desire. [No. 22]

Such notions of solidarity are more easily invoked than fulfilled. The theological depth of “Querida Amazonia” raises the stakes for the church. What response could in any way match the power of the global economy that binds us in such shallow and exploitative relationships? What would it take to build deeper ecclesial relationships of similar power?

What response could in any way match the power of the global economy that binds us in such shallow and exploitative relationships?

The challenge is not simply moral. Listening to the Amazon implicates the catholicity of the church as well.

Human groupings, their lifestyles and their worldviews, are as varied as the land itself, since they have had to adapt themselves to geography and its possibilities.… In each land and its features, God manifests himself and reflects something of his inexhaustible beauty. Each distinct group, then, in a vital synthesis with its surroundings, develops its own form of wisdom. [No. 32]

“Lumen Gentium,” the document from the Second Vatican Council, described the church as “like a sacrament” of “union with God and of the unity of the whole human race” (No. 1). How can the church embrace and receive the wisdom of these cultures? We in North America and Europe who have in a few centuries cut our forests, emptied the land of wildlife and now face degrading agricultural lands have much to learn from peoples who have found ways to thrive in their landscapes for many thousands of years. Religious and liturgical inculturation are essential local responses, but how might we in the Global North begin to listen deeply to these cultures after 500 years of colonial domination?

Learning to listen with the attentiveness required of a synodal church is demanding indeed. Our appreciation of the beauty of Francis’ text—or legitimate frustration with what he did or did not say—can easily distract us from this challenge. May the Synod for the Amazon be remembered as the beginning of this great work.

Vincent J. Miller holds the Gudorf Chair in Catholic Theology and Culture at the University of Dayton, in Dayton, Ohio. He is the editor of The Theological and Ecological Vision of Laudato Si’: Everything Is Connected.