I was at the Amazon synod. Here are its 3 significant lessons (and challenges) for the church 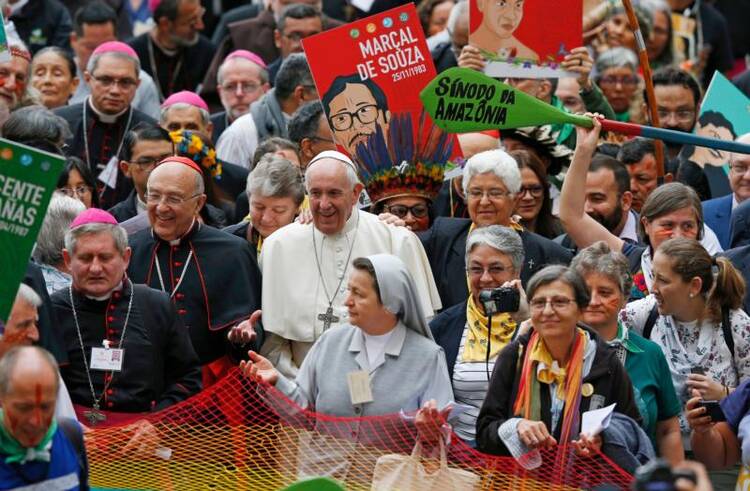 Pope Francis walks in a procession at the start of the first session of the Synod of Bishops for the Amazon at the Vatican in this Oct. 7, 2019, file photo. The Vatican on Feb. 12 released the pope's apostolic exhortation, "Querida Amazonia" (Beloved Amazonia), which offers his conclusions from the synod. (CNS photo/Paul Haring)

At the Amazon synod and in the post-synodal apostolic exhortation, “Querida Amazonia,” we have witnessed a number of unprecedented elements that have had an unexpected impact on our Catholic tradition at the local, regional and universal levels. We have also seen the effect of the synod on popular opinion worldwide. Hopefully, these elements will result in ongoing change for the whole church and the world in our pursuit of the kingdom of justice and peace.

The Amazon synod, in my opinion, wrought three significant changes in our way of proceeding.

At the Amazon synod, we saw the peripheries, considered for so long as irrelevant or secondary, moved into the center of the church’s attention.

First, we saw the peripheries, considered for so long as irrelevant or secondary, moved into the center of the church’s attention. This is an invitation to be open to the Holy Spirit coming from unexpected places, beyond our own limitations, structures and secure places. And as it happened in the journey of Jesus himself (and is so often true in the Gospels), the margins were probably the most significant place to encounter the true call from God.

Second, we saw a new ecclesiological paradigm emerging, focused on understanding the needs and gifts of the church in a particular part of the world. The traditional structures of the church are broadened as a result of the need to respond to the concrete cries of the people in a defined geographic region. The complexity of cultures in the Amazon region calls for an interdimensional pastoral, theological, social, ecological, economic and even political approach. This is both challenging and a source of anxiety as it pushes us out from our traditional modes of thought. The Amazon region is so complex and vulnerable, and its survival is so important for the whole planet, that it needs to be considered as an organic whole. In “Querida Amazonia,” Pope Francis even calls the Amazon a “sacred mystery” (No. 5) and a “theological locus” (No. 57).

Third, many of us recognized anew that the church needs an openness to diversity in order to fulfill a central part of its identity to become more and more universal. The church needs to seek to embrace other cultures with their own history, spirituality and journey, recognizing part of the revelation of God in them and the presence of the seeds of the incarnate Word in their midst. The Amazon synod calls for a truly intercultural approach in which the luminous, irreducible presence of the mystery of God in all that has been created is not erased, subsumed or colonized. Rather, the church should help the region to blossom as part of the mystery of revelation. The pope’s exhortation expresses it thusly:

Let us not be quick to describe as superstition or paganism certain religious practices that arise spontaneously from the life of peoples. Rather, we ought to know how to distinguish the wheat growing alongside the tares, for “popular piety can enable us to see how the faith, once received, becomes embodied in a culture and is constantly passed on” (No. 78).

I have had the privilege of participating in the direct presence of the church and its mission in the Amazon region, and having been an active participant in the preparation of the synod, its discernment and the actual assembly. During that process I came to understand that the most important element of the synod was the creative and potentially life-giving tension between the teachings of the Catholic Church (doctrine) and the sensus fidei (sense of the faith) of the faithful.

At the Amazon synod, many of us recognized anew that the church needs an openness to diversity in order to fulfill a central part of its identity to become more and more universal.

Neither should overcome the other because both express the deposit of faith (the body of revealed truth in Scripture and tradition) for Catholics, and it is important for us to find a way to identify the creative and transformative potential emerging from this tension. In the workings of the Amazon synod, many felt the sense of some rejection from those traditionally at the center of the church to the “sense of faith” coming from the peripheries. We also experienced the desire from some to subordinate the sensus fidei to existing church doctrine. This would have excluded any possibility for the synod to achieve one of its primary goals: to find new ways for the church to participate in an integral ecology. There is no possibility for discernment without an open heart to hear what is new in God’s call.

As was also proved in our synodal discernment, both existing doctrine and the sensus fidei can enrich one another. Their interaction provides one of the foundations of our faith. We need to create space for both, lest we be trapped in a fundamentalist living out of our faith.

On the one hand, in the doctrine-only approach, we would become a legalistic institution with no space for revelation and that is completely closed to any needed change, regardless of the urgent calls from God in the signs of the times. On the other hand, in the “sense of faith”-only view, we could lose sight of the journey of our church and be tempted to change everything in accordance with the prevailing opinion of the times, leaving no space for a necessary continuity of Christ’s mission through the church and its structures.

The most worrying result of this synod is the recognition that many Catholics are afraid of what actually should be a source of life for the growth of God’s mystery in the world.

The most worrying result of this synod, as we can sense from some media and some Catholics outside the Amazon territory, is the recognition that many Catholics are afraid of what actually should be a source of life for the growth of God’s mystery in the world.

We fear the beautiful source of life that comes from the cultural diversity of the Amazon’s people and the seeds of the sacred mystery in their spirituality, wisdoms and traditions. The result is often a monochromatic perspective, one that rejects the true catholicity of the church as presented in the Second Vatican Council (see “Lumen Gentium,” Nos. 16-17).

We’re all tied to the Amazon through globalization. Can the synod help us listen to its cry?
Vincent J. Miller

Further, we fail to fear the undeniable and unprecedented climate crisis that is a result of our living as if the planet had no limits and as if there was no tomorrow or future generations. We are living a “throwaway culture,” putting at risk the continuity of the revelation of God in all that God has created. This is a threat to the bringing about of the kingdom that Jesus promised, as we are coming to a point of no return. In doing so, we also deny our own social teaching in the encyclical “Laudato Si´.”

Pedro Arrupe, S.J., the superior general of the Society of Jesus from 1965-83, once said: “I don’t fear the emerging world. What I fear instead is that we may have little or nothing to offer this world, little to say or do, that would justify our existence. We have no desire to defend our mistakes, but neither do we want to commit the worst of them: to wait with crossed arms and not do anything for fear of making mistakes.” 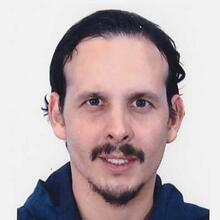 @mauloco29
Provide feedback on this article
Join the conversation: Login or create an account
Before you can comment, you need to update your profile to include your first and last name, as required in our comments policy. Then reload this page and you'll be set up for commenting. Update your profile
Show Comments ()
Comments are automatically closed two weeks after an article's initial publication. See our comments policy for more.