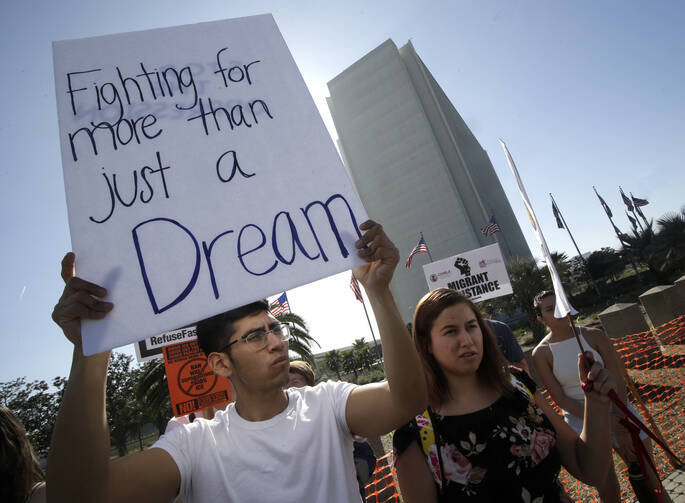 A protester holds a sign that reads "Fighting for more than just a Dream," as he joined Dreamers and hundreds of demonstrators calling for Deferred Action for Childhood Arrivals, or DACA, in early February outside the Federal Building in Los Angeles. (CNS photo/Mike Nelson, EPA

For more than a year, the fate of young immigrants who came to the United States as minors has hung in the balance. Dreamers had been protected since 2012 by the Deferred Action for Childhood Arrivals program, an Obama-administration policy that protected them from deportation.

The Trump administration announced plans to end DACA last year, but court rulings have temporarily blocked the termination of the program. Yesterday, the administration asked the Supreme Court to take up three of those rulings, the Associated Press reports.

“The president stated very clearly that he would take care of Dreamers. Thus far, he has not followed through on that promise,” Christopher Kerr, the executive director of the Ignatian Solidarity Network, told America. “He seems to be using DACA recipients to move forward his plans for a border wall. He’s trying to pit one group of immigrants against another.”

The Trump administration announced plans to end DACA last year, but court rulings have temporarily blocked the termination of the program.

Kevin Appleby, the senior director of international migration policy for the Center for Migration Studies of New York, said the administration is hoping for a different outcome with Mr. Kavanaugh on the bench.

“Hopefully, the Supreme Court will say no and that this has to go through the regular order,” Mr. Appleby said, adding that declining to hear DACA challenges in February was a “tip of the hat” to Dreamers and gave Congress more time to pass legislation.

“Even if the House changes parties, a barrier to the Dream Act will remain,” Mr. Appleby said, noting that a Republican Senate and Mr. Trump would likely stand in the way of a “clean” Dream Act.

“Even if the House changes parties, a barrier to the Dream Act will remain.”

In May, a three-judge panel of the 9th U.S. Circuit Court of Appeals heard arguments in one of the cases, but it has yet to rule. The Associated Press has reported that the Supreme Court does not usually take up cases before a federal appeals court ruling.

The Trump administration maintains that the Obama administration overstepped the executive powers granted by the Constitution when it implemented DACA.

This most recent request also came a day before Tuesday’s midterm elections, which will likely impact Mr. Trump’s agenda going forward. Earlier this year, the U.S. bishops encouraged Catholics to call their senators on behalf of Dreamers, but to no avail. Even plans to force a House floor vote this summer fell short.

“It’s important, particularly from the faith perspective, to recognize the human elements involved,” Mr. Kerr said, noting that Dreamers have lived in a state of uncertainty for years. That has taken a toll on DACA recipients, he said, who are unsure of what path to take with their careers, education and family life. Some universities have reported counseling DACA students through emotional and psychological trauma, Mr. Kerr said.

“They’ve come to see the uncertainty almost as a part of their lives, but it’s also very stressful,” he said. “I hope that people keep that in mind as they head to the polls.”

Isaac Cuevas, the associate director of immigration affairs for the Archdiocese of Los Angeles, said Congress is under more pressure to take action on behalf of Dreamers now that the Trump administration has again asked for the Supreme Court to make a ruling.

“Both parties need to find a common ground that’s fair and moves the issue forward,” he said. “Our laws are not catching up to the global reality of migration.”

The Trump administration’s effort to end DACA is one of many initiatives to temper both legal and illegal immigration.

“Hopefully, legislation that protects Dreamers will be the beginning of a series of measures that address other migrants,” Mr. Cuevas said, noting, in particular, recipients of Temporary Protected Status and asylum seekers.

“There’s widespread agreement that those young people should remain in the United States and not be deported, but there’s a difference of opinion of what that would look like,” Mr. Appleby said. While some favor a path to citizenship, others insist Dreamers should only be offered permanent residency, he said. What will happen to the parents of Dreamers is another contentious issue.

“The bottom line is that the issue needs to be resolved sooner rather than later,” Mr. Appleby said. “Congress needs to step up and pass legislation for Dreamers.”

The Trump administration’s effort to end DACA is one of many initiatives to temper both legal and illegal immigration. Recently, for example, the Department of Homeland Security proposed making it more difficult for legal immigrants to get green cards.

Last April, Homeland Security Secretary Kirstjen Nielsen announced the administration would crack down on so-called loopholes available to those who seek asylum in the United States. Homeland Security has also ended Temporary Protected Status for U.S. residents from seven countries, including more than 250,000 Central Americans.