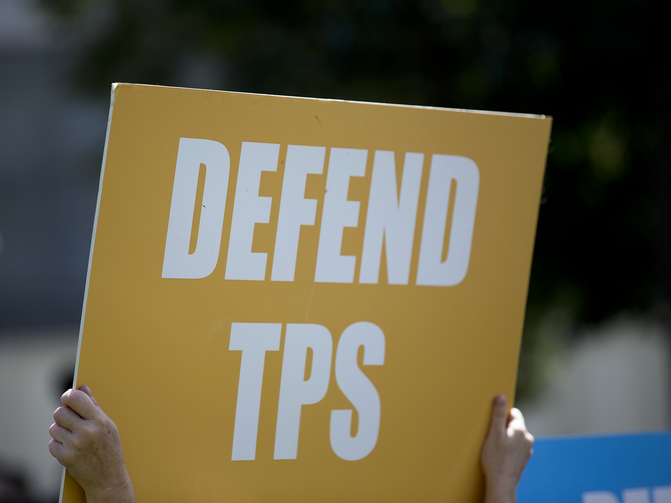 Someone holds a sign show support for Temporary Protected Status, or TPS, during a rally near the U.S. Capitol in Washington Sept. 26. Bishop Joe S. Vasquez of Austin, Texas, chairman of the U.S. bishops' migration committee, told the U.S. government Oct. 17 that current TPS recipients from El Salvador and Honduras "cannot return to safely to their home country at this time" and urged their TPS status be extended. (CNS photo/Tyler Orsburn)

The Catholic Legal Immigration Network is calling for Congress and independent investigators to review the Trump administration’s decision to end temporary protected status for more than 300,000 individuals and their families.

The Department of Homeland Security ignored warnings from top officials at the State Department, The Washington Post reported last week, by ending T.P.S. for Hondurans on May 4.

Established by Congress through the Immigration Act of 1990, T.P.S. is granted by D.H.S. and offers temporary lawful status and work authorization to those already in the United States from countries affected by conflict, natural disaster or other unsafe conditions.

“This administration has taken a unique and narrow interpretation of the T.P.S. law that Congress passed many years ago, which was intended to protect people,” Jill Marie Bussey, CLINIC’s advocacy director, told America. “It’s certainly not in step with how previous administrations have interpreted the law. These are irregular decisions.”

“This administration has taken a unique and narrow interpretation of the T.P.S. law that Congress passed many years ago.”

Former Secretary of State Rex Tillerson and other Trump administration appointees have pressured D.H.S. to end T.P.S. for migrants from countries like El Salvador, Honduras and Haiti. Senior U.S. diplomats, however, warn that sending more than 250,000 recipients back to Central America could exacerbate ongoing troubles and, in turn, lead to a new influx of immigrants.

“It’s too narrow, and we’re suspicious as to why,” Ms. Bussey said, noting that the law requires D.H.S. to take information from other agencies when deciding whether to continue T.P.S. for a given country. The Department of State has diplomats around the world who can evaluate country conditions.

“The Department of State actually ignored their own people who are in these countries,” Ms. Bussey said. “That points to decisions that were political in nature. People can make that assumption based on how these decisions were carried out.” She noted reports of White House Chief of Staff John Kelly pressing for the end of T.P.S. for Hondurans.

U.S. Citizenship and Immigration Services has not engaged the public as it used to, either, Ms. Bussey said. When T.P.S. was terminated for Haitians, there were 56 days between when the announcement was made and when instructions for T.P.S. holders and employers were available.

“Some employers were worried about losing dozens of employees at the same time,” she said. “And the T.P.S. holders have a relatively short time to save and prepare to leave, while they also fear losing their jobs.”

“That’s why we’re calling for an investigation,” Ms. Bussey said. “Congress needs to investigate. People need to be held accountable for these decisions. And Congress needs to step up and pass a legislative solution. It’s not right for people to be thrown off a ledge without a safety net.”

“When Congress created T.P.S., it did not put a time limit on it. There’s not a magic period of time when T.P.S. is appropriate.”

“We need transparency on how these decisions are made,” she said. “The secretary of Homeland Security is given discretion, but we know the conditions are problematic. They should have nothing to hide.” Ms. Murray called the decisions to end T.P.S. “extremely technical,” adding that D.H.S. claimed conditions in the countries of origin had “improved just enough” to receive T.P.S. holders.

Senator Robert Menendez, a Democrat of New Jersey, has called on Secretary of State Mike Pompeo to explore the possibility of reversing the T.P.S. decisions and has asked the Government Accountability Office to investigate the decision-making process.

“When Congress created T.P.S., it did not put a time limit on it,” Ms. Murray said. “There’s not a magic period of time when T.P.S. is appropriate. It’s hard to know at the onset of conflict or disaster. It’s common sense to allow them a path to remain lawfully.”

She noted that El Salvador and Honduras, countries that originally received T.P.S. for migrants due to natural disasters in the late 1990s, continue to have some of the highest homicide rates in the world. “We can’t just base this on Hurricane Mitch anymore,” Ms. Murray said.

Those who live in the “Northern Triangle”—El Salvador, Honduras and Guatemala—are fleeing poverty and violence at the hands of street gangs.

The U.S. bishops have reached out to congressional offices to find more answers, Ashley Feasley, the director of migration policy and public affairs at the U.S. Conference of Catholic Bishops, told America. The revelations about the T.P.S. evaluation process underscore the need for congressional oversight, she said.

“It’s disturbing to see that State Department officials could be disregarded. We would urge congressional investigation to see how these decisions were made,” Ms. Feasley said.

“People have to make heartbreaking decisions about their family, especially those who have U.S. citizen kids,” she said. The U.S.C.C.B. reports that Honduran and Salvadoran T.P.S. holders combined are the parents of more than 270,000 children born in the United States. “This issue is more than a political decision. People’s lives are in the balance,” Ms. Feasley said.

Conditions on the ground

A report released by the U.S. bishops in October suggests that it is still not safe for Salvadorans and Hondurans to return to their native country. The report notes ongoing forced displacement due to violence and other factors. The bishops say these countries are not ready to receive an influx of returning expatriates.

Bill O’Keefe, the vice president for government relations and advocacy for Catholic Relief Services, said returning immigrants to countries like El Salvador, Honduras and Haiti would “overwhelm systems that are already at a breaking point.”

“The forced return of hundreds of thousands of people to unstable countries is not only unsound policy, but it conflicts with Catholic social teaching and our experience with welcoming and integrating large populations of immigrants to the U.S. and around the world,” Mr. O’Keefe told America in an email. “The Church is committed to caring for all migrants, and affirms that all people have the right to conditions worthy of human life and, if these conditions are not present, the right to migrate.”

Those who live in the “Northern Triangle”—El Salvador, Honduras and Guatemala—are fleeing poverty and violence at the hands of street gangs.

“The ‘join-or-die’ policies of gangs and drug cartels make life nearly impossible for youth and their families in gang-controlled areas,” Mr. O’Keefe said, noting that local law enforcement cannot protect residents. “If TPS recipients from El Salvador and Honduras were forced to return to their home countries, they could immediately become targets for extortion or be killed.”

In Haiti, he said, returning T.P.S. recipients could undo years of ongoing economic recovery from the 2010 earthquake, which destroyed most of the infrastructure in the Caribbean nation. Mr. O’Keefe added that remittances to Haiti from the United States have been instrumental in boosting the country’s economic prosperity. In 2015, remittances exceeded $1.3 billion, or about 15 percent of Haiti’s gross domestic product.

Ms. Bussey was one of the experts who met with D.H.S. regarding T.P.S. for nearly 9,000 Nepalis. A 7.8-magnitude earthquake rocked the Asian country in 2015, killing and injuring thousands. During the meeting, she said D.H.S. representatives were nodding as information was presented about the terrible conditions in Nepal, so she was shocked when the decision to end T.P.S. for the country was announced last month.

“If the earth is not still shaking, we’re not going to renew T.P.S. in Nepal? That’s ridiculous,” Ms. Bussey said. “It’s just so clear that Nepal cannot safely accept these T.P.S. holders and their families.”

U.S.Citizenship and Immigration Services has yet to provide further instruction for T.P.S. holders from Nepal or their employers. All the T.P.S. holders have to go on, Ms. Bussey said, is the press release, which is not even in their native language.

Catholics need more choir boys to play with. Not taxpayers place to provide for these people . If Catholics are so opposed then move to that country. TPS means temporary not permanet

I have a Catholic friend, regular churchgoer, who holds the strong opinion that those with TPS status should all be shipped back home, immediately. The original conditions for which they were given TPS status no longer exist. He accepts no conditions or excuses why, even out of simple charity for lives reconstructed while the TPS immigrants lived in the USA, these people should not be rounded up and just sent back home.

And I say to myself, why doesn’t he have a moral compunction to ignore the legal arguments for returning them home to consider and accept the arguments centered in charity. I would suggest that some of our dioceses, parishes, priests, nuns, and sermons with their heavy emphasis on the legalisms of Catholicism, and Catholic schools with their distinct notoriety for discipline, have created generations that love the “Law” and ignore “Christian charity.”

Churches are much like politicians since growing numbers of their congregations are Latinos, immigrants and illegal aliens and a significant part of church income derives from them. Consequently, about 30 years ago, my family stopped attending our church, primarily because the pastor refused to hear my objections. He wanted to justify church support of illegal alien presence and continued illegal immigration. I know of many who also are devout as we are, but stopped supporting their churches.

Ellen B
1 year 9 months ago

Truly, what would Jesus do?