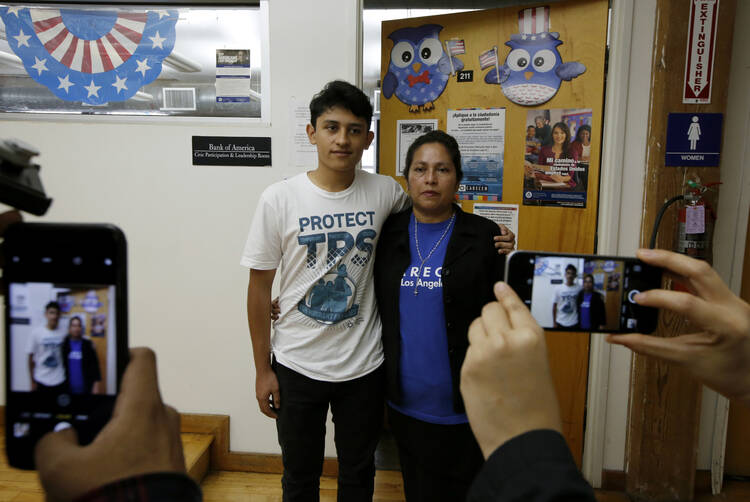 U.S. citizen Benjamin Zepeda, 14, with his mother Lorena Zepeda, who benefits from Temporary Protected Status, have their photo taken after a news conference in Los Angeles on Jan. 8. (AP Photo/Damian Dovarganes)

Dalia Diaz was 4 when she came to the United States with her family from El Salvador. That was more than 25 years ago.

She and her parents are in the United States legally because they received Temporary Protected Status, granted by the Department of Homeland Security to individuals coming from countries enduring ongoing conflict, environmental disasters or other unsafe conditions. T.P.S. protects them from deportation.

But the Department of Homeland Security announced yesterday that T.P.S. coverage will end for nearly 200,000 Salvadorans in the United States on Sept. 9, 2019. The protected status was first offered to Salvadorans in 2001 following a pair of devastating earthquakes in that nation. With the termination of this program, the Trump administration has ended T.P.S. for nearly 250,000 individuals from El Salvador, Sudan, Haiti and Nicaragua. D.H.S. has until May 4 to extend T.P.S. for 57,000 Hondurans.

“The thought of having to go back to El Salvador is pretty scary.”

Ms. Diaz and her parents are still figuring out if they can remain here without T.P.S.

“The thought of having to go back to El Salvador is pretty scary,” Ms. Diaz said. “I came with my mom and my dad, so they’re both in the same situation as I am.”

Her family came to the United States for the first time in the 1980s, fleeing the Salvadoran civil war. Ms. Diaz’s two older sisters were born in the United States, when the family shared a one-bedroom Los Angeles apartment with two other families.

“My mom couldn’t take it,” Ms. Diaz said of the family’s tight L.A. living quarters. “But once she came back [to El Salvador], the conditions were worse, and she realized we were better off in America.”

After Ms. Diaz was born in El Salvador, a gang threatened to kill anyone in their family home if they did not pay la renta, a “protection tax” imposed by organized crime. So the family moved back the United States. She and her parents entered without documentation; her sisters were able to enter with their U.S. passports.

After Ms. Diaz was born in El Salvador, a gang threatened to kill anyone in their family home if they did not pay la renta, a “protection tax” imposed by organized crime.

Today, Ms. Diaz is applying for permanent residency through her husband, a U.S. citizen. Her parents, in their 50s, are doing the same through Ms. Diaz’s sisters, who are U.S. citizens. But they are unsure how their applications will turn out.

“Each individual has a unique case,” said Michelle Sardone of the Catholic Legal Immigration Network. “What’s most important is that they get a quality legal representative.”

Legal help can inform individuals who will no longer have T.P.S.—not only from El Salvador but from countries like Sudan, Haiti, Honduras and Nicaragua—about their options for changing their immigration status. Relatives of U.S. citizens, for example, may be eligible. Others may be able to change their status through an employer sponsorship.

But most T.P.S. recipients have been in the United States longer than one year, so they are no longer eligible to apply for asylum status, Ms. Sardone said—with some exceptions.

Most T.P.S. recipients have been in the United States longer than one year, so they are no longer eligible to apply for asylum status.

A qualified legal service provider will be able to advise T.P.S. recipients on the likelihood of a successful application, Ms. Sardone said. With a family petition for a spouse, for example, the couple must prove they are in a “good faith” marriage.

“It’s important to know if you’re ineligible,” Ms. Sardone said. “You don’t want to go to an unscrupulous provider somewhere who will take $5,000 with false promises.”

The Catholic Legal Immigration Network protects the rights of immigrants by partnering with Catholic and community immigration programs. It offers a variety of resources through its website, includinginformation for TPS recipients. For example, Ms. Sardone encourages all T.P.S. recipients to reregister so their status does not expire even before the D.H.S. deadline.

Isaac Cuevas, associate director of immigration affairs for the Archdiocese of Los Angeles, said the archdiocesan offices received many calls from Salvadorans after the T.P.S. announcement on Jan. 8. His office is working with Catholic Charities to provide screenings for T.P.S. recipients who may be eligible to adjust their status.

“We’ve had people call and ask what we’re going to be able to do for these T.P.S. recipients, asking is the news was true, if they are going to be deported,” he said, noting that Los Angeles is home to the second-largest number of Salvadorans in the United States, following the Washington, D.C., area. “It’s definitely been felt in the community. It’s echoed far and wide.”

Mr. Cuevas referred to a study about Honduran and Salvadoran T.P.S. recipients that found 88 percent of these recipients work and 30 percent have home mortgages. Salvadoran, Honduran and Haitian T.P.S. holders are also parents to 273,000 U.S.-citizen children.

Moreover, it is hard to argue that circumstances in their countries of birth have improved since T.P.S. was initially granted. Dylan Corbett, director of the Hope Border Institute, has met many Central Americans fleeing violence in that region. He spoke of a 12-year-old girl who, having reached puberty, was approached by one of the gangs in El Salvador.

“It’s one of the most dangerous countries in the world,” Mr. Corbett said, adding that U.S. politicians who claim circumstances have improved in Central America are ignoring the facts. “We’re going through a dark political moment. People across the political spectrum should find [the revoking of T.P.S.] offensive.”