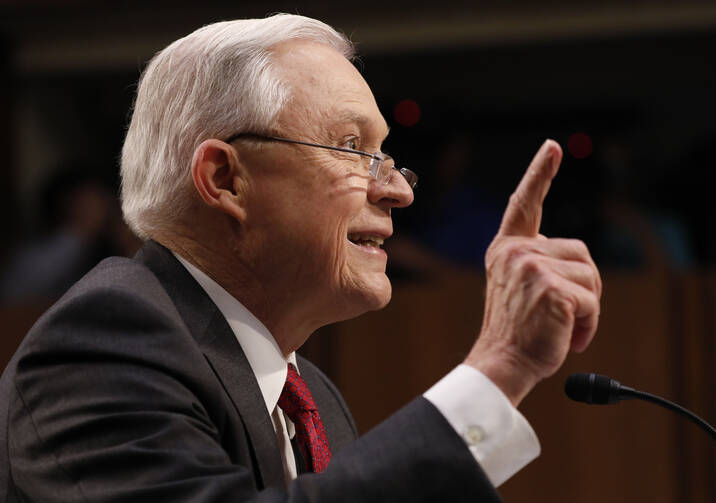 Attorney General Jeff Sessions may be in danger of harming “victims of religious persecution,” according to 10 faith-based groups.

Mr. Sessions is reviewing a case decided by the Board of Immigration Appeals involving a Salvadoran woman who received asylum due to fleeing domestic abuse in her country. The attorney general is questioning whether “private criminal activity” constitutes persecution under the Refugee Act.

“We are fearful of what [Mr. Session’s] decision is going to look like,” said Victoria Neilson, a senior attorney at the Catholic Immigration Network, Inc., one of the 10 organizations that filed a joint amicus briefing. “It could affect a broad group of people fleeing their country.”

“Our fear is that, with the focus on private individuals, people who are unable to get protection from their government will not be eligible for asylum."

Asylum laws are complicated, Ms. Neilson explained. Different aspects and definitions are interrelated, so any change could have “a ripple effect on all asylum seekers.” While persecution is often understood as a government harming individuals, it also takes place when a government cannot or does not protect individuals from harm from others.

Ms. Neilson noted Pentecostal Christians in Eritrea who face violence from mobs as an example of a government not protecting a group of people. “Our fear is that, with the focus on private individuals, people who are unable to get protection from their government will not be eligible for asylum,” she said.

The attorney general “talks about asylum as a loophole,” Ms. Neilson said. “That’s the rhetoric this administration is using. As if people who are fleeing for their lives and complying with existing asylum laws are somehow looking for loopholes. … We don’t know what the result will be, but certainly there have been a lot of restrictions in other areas, including refugees.”

“We do not believe that the U.S. Congress intended people of faith to be delivered back to the hands of their oppressors."

Bevan Dowd, an attorney with Keker, Van Nest & Peters, the law firm that provided pro-bono legal counsel to CLINIC and the other faith-based groups, noted that the United States “was founded by people fleeing religious persecution.”

“We want to make sure the attorney general has thought this issue through,” said Ms. Dowd, whose mother is a Christian Palestinian. “As a person of faith himself, he should know how it will affect victims of religious persecution.”

Bishop Kevin J. Vann of Orange, Calif., the chairman of CLINIC, said people of faith are called to protect victims of oppression.

“We do not believe that the U.S. Congress intended people of faith to be delivered back to the hands of their oppressors,” he said in a CLINIC press release. “This decision stands in conflict with our values as Americans, who have over many decades welcomed refugees and victims of oppression, and is clearly in opposition to our calling and history as people of faith.”

In addition to CLINIC, nine other faith-based groups joined in the amicus briefing: the Benedictine Sisters of the Federation of St. Scholastica; the Conference of Benedictine Prioresses; the Conference of Major Superiors of Men; the Hebrew Immigrant Aid Society; the National Council of Jewish Women; National Justice for Our Neighbors; the Unitarian Universalist Service Committee; the United Methodist Immigration Task Force and World Relief.

"In addition to CLINIC, nine other faith-based groups joined in the amicus briefing..." Not a single Evangelical group or major Catholic organization, such as USNCCB, listed. Amazing, but telling! God forgive us!

With the latest report of Hondurans to be deported, the lack of Catholic condemnation of the policy is reprehensible but familiar.