What’s new for asylum seekers under the Trump administration 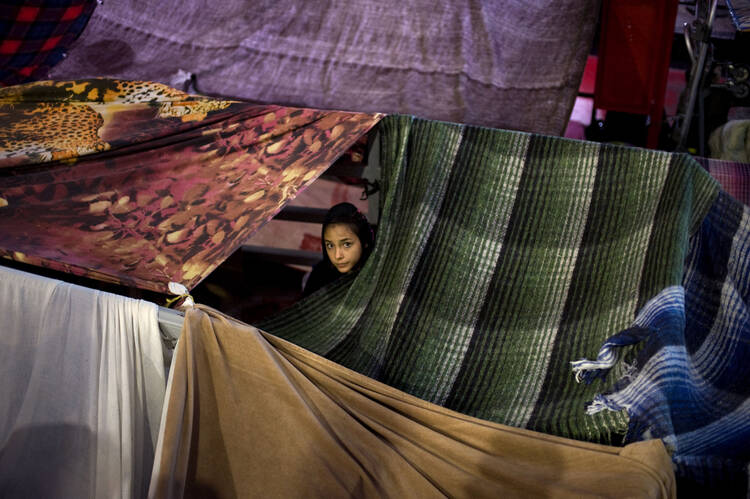 A young woman peers out from an encampment of makeshift tents June 24, 2016, in Tijuana, Mexico, as she and several hundred people wait at the U.S.-Mexico border for their turn to cross into the U.S. to seek asylum. (CNS photo/David Maung)

It will be more difficult than ever to obtain asylum in the United States.

Kirstjen Nielsen, U.S. Secretary of Homeland Security, said on April 4 that the Trump administration would address “the rising level of fraud that plagues our system,” noting an increase in asylum claims overall in the last five years, including claims from families and unaccompanied minors.

“Loopholes” in U.S. immigration law caused the growth in Central American migration over the last 10 years, according to Ms. Nielsen. She did not mention the increase of gang violence and poverty in El Salvador, Honduras and Guatemala as other possible causes, although these have been cited by migration experts among the major causes of migration from the region.

“The traffickers and smugglers know that if you arrive with a family, under our current legal and court system, you have a much better chance of being released into the United States,” Ms. Nielsen said during the press briefing, accusing asylum seekers of using “magic words” when they claim “credible fear.”

“When we have to deal with the fraud and the backlogs,” she said, “we are unable to help those truly in need.”

Instead of building walls, the U.S. should revisit good neighborism.
The Editors
Those “truly in need” may be a greater number than Ms. Nielsen thinks, according to Ashley Feasley, director of migration policy and public affairs at the U.S. Conference of Catholic Bishops. She called the assertions of fraud troubling.

“People who are applying for asylum face extreme persecution,” she said. “It’s something people avail themselves of in extreme circumstances. When you look at the criteria, what you have to demonstrate—being separated from family, living here in a period of uncertainty—people are doing this out of complete desperation.”

"When you look at the criteria, what you have to demonstrate—being separated from family, living here in a period of uncertainty—people are doing this out of complete desperation.”

Many in the United States do not understand life in Central America, Ms. Feasley said. She used the example of one man she met in El Salvador who was unable to be hired because his address was in gang territory. Some residents are forced to pay gang members to both enter and leave to their own neighborhoods. Families, fleeing drugs, violence and gang recruitment, often are forced to move many times within their home country before undertaking the journey north.

A year ago, the Trump administration changed the threshold that establishes a “credible fear” justifying asylum status. According to the Catholic Legal Immigration Network, Inc., asylum seekers now have to present a “preponderance of evidence” rather than simply a “significant possibility” to establish credible fear.

This past January, the U.S. Citizenship and Immigration Services announced it would process more recent asylum claims before addressing older ones. U.S.C.I.S. said the move is “an attempt to stem the growth of the agency’s asylum backlog.”

Michelle N. Mendez of CLINIC said the new policy means asylum seekers should be ready for interviews three to six weeks after filing. Tighter deadlines could lead to incomplete applications with incomplete evidence attached, especially if submissions are coming in from a different country.

“For asylum-seekers who have already been waiting for months or years to have their asylum case scheduled, the wait is about to get much longer.”

“For asylum-seekers who have already been waiting for months or years to have their asylum case scheduled, the wait is about to get much longer,” Ms. Mendez said in an email to America. That wait “has life or death implications for any family residing abroad in dangerous conditions and waiting for the family member to make it through the [U.S.] asylum system.”

Kevin Appleby, the senior director of international immigration policy for the Center for Migration Studies in New York, noted the administration’s effort to repeal protections for unaccompanied children, which was among those aspects of the law described as a “loophole” by Trump officials. More recently, the Trump administration pressured Mexico to stop a caravan of asylum seekers, some of whom planned to make their way to the U.S.-Mexico border this week, another move he said that reveals an underlying intention.

“They are also separating families, mothers from their children, at the border. That sends a definite signal, ‘Don’t come,’” Mr. Appleby said. “People have to read beyond the headlines to understand what’s really going on.”

“They are also separating families, mothers from their children, at the border. That sends a definite signal, ‘Don’t come.’”

In his work, Mr. Corbett meets many people seeking asylum. In the El Paso Sector, there is “close to a 99 percent denial rate” for asylum, he said. Asylum is rarely granted on the border overall, Mr. Corbett said, explaining that it is much more likely for a person to receive asylum in cities like New York and Baltimore. Such a disparity in court outcomes would not be allowed in other contexts, he said.

The Hope Border Institute, in partnership with the Borderland Immigration Council, reported on Immigration and Customs Enforcement, Customs and Border Protection and the immigration court practices in the region in January. Asylum seekers are often detained for months before getting a hearing before a judge, Mr. Corbett said.

“We’re not open to asylum seekers and refugees. That’s a fundamental change in the identity of our country.”

In 1948, the United Nations recognized the right for individuals to seek asylum from persecution in other countries. According to its 1951 convention on refugees, the U.N. prohibited asylum seekers from being detained simply for seeking asylum. The convention also recognized that seeking asylum may require individuals to “breach immigration rules.”

It sounds like there is only one place in the world that should take asylum seekers. Mexico might be the ideal place for them to go though why not Costa Rica or Panama or Colombia or Peru?

Shouldn't people seeking asylum go to places where the culture is similar to their own?

Maybe the author should be recommending changes in the economic snd political cultures in the problem countries. He might have more credibility then.

"Shouldn't people seeking asylum go to places where the culture is similar to their own?" - You, of course, will be returning to Europe as your ancestors who took land from the Native Americans and 'earned' Citizenship by stepping off a boat plainly did not go to a place where the culture was similar to their own?
"It sounds like there is only one place in the world that should take asylum seekers." - No. There are many other countries that do more than their fair share and take far more asylum seekers per capita than the United States. However, if we keep in mind that many asylum seekers are doing so because the US has destroyed their countries or has made it impossible to live in their countries because of economic oppression, then it's plain the US isn't doing enough.
"Maybe the author should be recommending changes in the economic snd political cultures in the problem countries. He might have more credibility then." - You might have some credibility if you acknowledged the US's role in destroying or influencing the economic and social problems in countries from where asylum seekers come. But we all know that's a stretch.